When I was about twelve, one of the signs that The Admiral was secretly listening to me, and not just thinking up new and interesting fatherly pearls of wisdom to dole out, was when he took the afternoon off from work to take me to see The Monster Squad (1987).  I'd wanted to see the movie, no one else did (except for him, I guess), and so one day he took the afternoon off in the middle of the week - I guess it was summertime - and we hit the Showplace 6, ate some popcorn and watched Wolfman take one in the crotch. 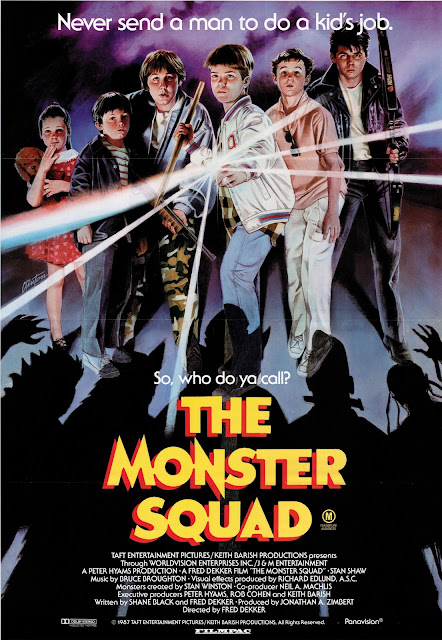 I recall we both liked it, it was darker than I expected, maybe even a little grittier, and Dracula was straight up frightening in my twelve year old eyes.  And, as anything you consider to be not-dinner-table-conversation occurred, I sort of cringed at having to let my dad know I knew what a virgin was outside of the Christmas story.

The prior year, he'd also taken me to see Little Shop of Horrors when no one else wanted to go, so apparently The Admiral was into taking me to see movies that would bomb at the theater, but gain a following on home video.  But he also got really jazzed at the opportunity to watch old sci-fi movies like War of the Worlds with me, and was always up for a trip to see something like The Last Starfighter or The Untouchables.  Way to go, man.

But, man, it really seemed like nobody else but The Old Man and myself had seen this movie until the last fifteen years.  Although, eventually friends did see it on VHS or cable, as did I.

At some point, maybe in 2008, pal JackBart and I caught a screening at The Alamo Drafthouse with a good chunk of the cast, director Fred Dekker and screenwriter Shane Black in attendance.  The place was packed, the Q&A was great, and the cast and crew pretty forthcoming with details.  I was one of five people who let out a loud whoop when Black mentioned he was working on Doc Savage.

One thing that really stuck with me from that screening was the honest recollection of studio compromise, of what was originally envisioned, and a script that the director felt had been very watered down to serve studio hopes for a Goonies-type film leading to franchise dreams, rather than a movie about adolescents growing up when you know, Dracula shows up.  I'd love to read that original script some day.


Since then, I've watched the movie once or twice, as I know I showed it to Jamie, and I think I watched it by myself.

So, last night, we had a Twitter-watch with several of you showing up.  Stuart, PaulT, JimD, Katie, Jamie and probably a lurker or two.

Firstly, let's discuss the outstanding make-up and creature fx by Stan Winston and a host of others.  Even if you don't like the movie all that much, you have to appreciate the outstanding creature design that's sort of the last of the great designs photographed fully.  I always take issue with movies that think we don't want to see the full creature, or they're clearly hiding that they don't actually have a full creature, but here we get to see the full picture, unpixilated, without herky-jerky camera movements to hide the bad design. 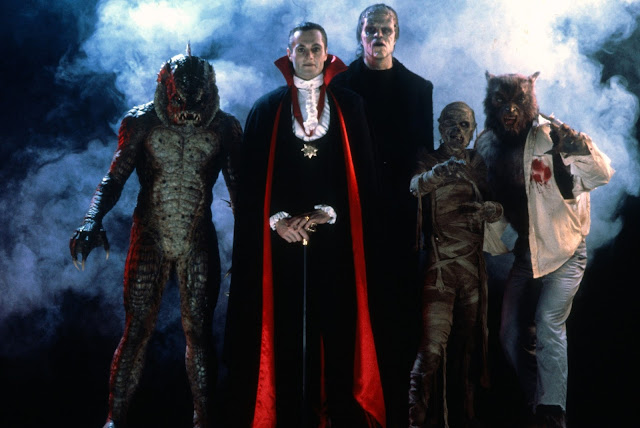 Despite the cape and magician look of Dracula that was already a cliche in the 50's, something about this Dracula design actually felt like something to be taken seriously.  Maybe it was weird to see Dracula driving a car in the outfit, but it works shockingly well in execution.  Throw in the Gill Man redesign that's genuinely predatory in feel, a wolfman that delivers on the promise of the idea, a Mummy that's dessicated and rotting and a Frankenstein monster that looks equal parts book and movie, and you're doing well.

The story itself is perhaps an odd way to talk about growing up, but our lead character, Sean, is middle-school aged, in that precarious spot between childhood and whatever it is you're up to in high school.  He's pre-occupied with monster movies and sci-fi (cough), and isn't necessarily keeping his head on a swivel when it comes to what's going on around him, from his parents' failing marriage to helpful little girls and boys who are paying attention, to the girl in her underwear in the window across from the treehouse.

But along the way, they learn about trusting others, girls in underwear, what a virgin is (and is not), old German guys are all right, monsters are people, too, and that the only way to kill a wolfman really is to use a silver bullet.   But, the monsters are actually kind of scary in this movie - and as the kids go from fans of fantasy to the only ones who have an idea what's really happening, it makes for an interesting escalation that I don't think we'd see today.  Even when kids are in peril in movies of the last few years, Dracula isn't picking up tiny kids so he can look them in the face and call them a "bitch".  It's a weird bit of reality poured into a movie about Gill Men and Mummies in closets.  Bad people can be very bad, even when they're Draculas.

It's true the movie does feel truncated, and you can see glimpses of the movie that was originally intended before hands began working to improve it.  I'd have liked to have seen that movie, but I've no real complaints about what we do see.  But the loose sketch of the parents' troubled marriage is only loosely resolved, we never get a real picture of the characters who aren't Sean, and Fat Kid... is his problem glandular?

As good as the monster design is, I want to make sure we point out how good the actual monsters are in performance.  It is a crime that this is the only time Tom Noonan played Frankenstein's monster or Jon Gries got to transform into a werewolf.  But it's also a damn shame this is the only time we saw Canadian actor Duncan Regehr play Dracula.  That guys seriously could have been as well remembered as Christopher Lee in the role if he'd been given a straight Dracula picture to do.*  Far from the Nickelodeon versions of these characters kids grow up with now, this was an era in which monsters were still expected to be scary and kill people and whatnot, not be the butt of jokes to soften them so much kids would never have a bad thought.

The movie achieves the threatening pose of the monsters without a bodycount, really, keeping this a movie for kids, but kids of a certain age who do use swears, who are perhaps starting to get interested in kissing somebody at some point.  I like this.  Monsters should have either menace or pathos.  They should not sparkle.

My one real beef with the movie is probably just the dated homophobic dialog, which, I am sorry to say, was real part and parcel to being a 13-wear-old kid in the 'burbs when the folks weren't around circa 1987.  Not sure if the kids are as ready to use casual homophobic insults today as we were back then, but I hope not.

Anyway, it was super fun watching the film with you guys, who similarly appreciate what the picture has to offer.   If you want to see what was said, look for our tag #wolfnards over on twitter.

As someone who believes the Universal-type Monsters still have a lot to offer when they're in the right hands, this kind of movie remains a lot of fun to watch, and as something that resonated with me a bit more than, maybe, some more popular movies like The Goonies**, it's still something fun to return to every once in a while.

*someday I need to find the old Family Channel episodes of Zorro, where Zegehr played the titular saber-wielding hero.  I was never a fan of the character in comics or old TV episodes from the 50's, but I loved that show when I was in high school, it turns out.  I forgot I was that old watching that show.

**I like Goonies well enough, but I don't entirely get the appeal.  It feels like kids screaming at each other trying to be heard for 90 minutes.  And, the older I get, the Sloth storyline makes less and less sense.

Oh man. I have totally seen this flick but completely forgot about it. I feel like I may have seen it in more recent years and not as a kid, but I haven't had cable in, like, ten years, so who knows?

Wish I would have clued in and watched with!