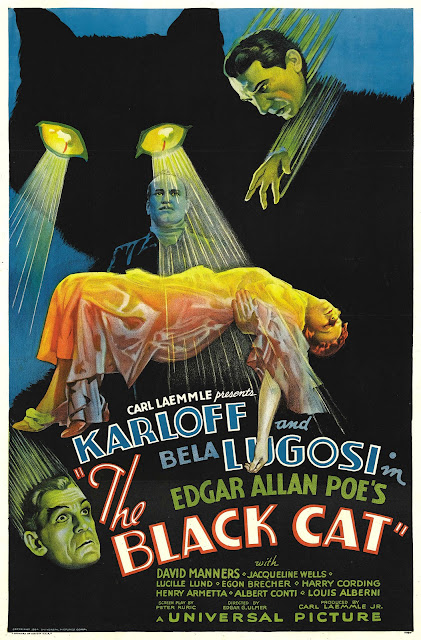 I know I rented this movie once before (on VHS, to put a date on it) but I realized in watching it that I had no recollection of the movie, which means I didn't really watch it the first time.

The Black Cat (1934) marks the most famous pairing of Lugosi and Karloff,  and while it is most certainly a horror film of a type, it's in no way a creature-feature or monster film.  It's a movie that would predate a lot of later horror films from Karloff and Lugosi as they adapted Poe, and, of course, later films with Vincent Price.

American honey-mooners Joan and Peter Allison are seeing post-WWI and pre-WWII Eastern Europe by train when they meet Lugosi, who plays a doctor who is en route to see an old friend.  From the station, they travel together to head to the next town in a bus which slides off the road near the friend's house, killing the driver and injuring Joan.  All of them head to the house, a fantastic bauhaus-style mansion.

The friend, Karloff, is now a famed architect, but he and Lugosi have very old business to settle.  It seems Karloff had sold out his fellow countrymen and allowed the Russians to attack the very site of the house, where Lugosi was captured, taken prisoner and held for 15 terrible years.

The two begin a game with Joan as the prize - Lugosi wishes her to be free (perhaps), and Karloff makes it clear he plans to keep her.  And things get complicated.

Directed by Edgar G. Ulmar - whom I'm pretty unfamiliar with, the movie swings for the fences as a post-war, big scale power play between two larger than life figures with two naive Americans caught in the middle.  The score is near-relentless, composed of classical pieces that probably weren't beaten into the ground quite yet in 1934 and remain effective in parts.  Both Karloff and Lugosi are on their game, and the difference between the two couldn't be more obvious - Karloff's sinister stillness is in force and Lugosi's charm devolving into madness are in full effect.

The real horror of the film comes in waves, from the revelation of what Karloff has done with Lugosi's wife, to what became of his daughter and the scope of his crimes.  Lugosi himself is more than ready to go toe-to-toe, his own soul crushed in prison these past years.  Old enemies circling one another always makes for a compelling tale.

It's an interesting movie in many, many respects, but never quite as smooth as you want it to be, where perhaps a better director might have made a bit more out of the story and not relied so heavily on the parts they'd assembled working well together versus conducting all those pieces in better harmony.  Still, it's an interesting movie, an interesting bit of the 1930's Universal horror pantheon that gets its mention but seems to rarely screen at theaters or on television, and is probably worth more or an inspection than the 1950's schlockier horror flicks.
Posted by The League at 10/18/2015 11:15:00 AM

I had to look back to see if you reviewed this one. As far as non-monster universal horror flicks, I enjoyed this one as much as any I've seen. I enjoyed The Raven, but the Karloff-Lugosi pairing is much more compelling here. Surprised they got away with some of the blasphemous imagery at end with the crucifixion imagery juxtaposed with a satanic cult. Pretty creepy stuff.