I took some suggestions via Facebook for an October read.  Every year I try to read a "scary" book during the month leading up to Halloween, and while I got a number of suggestions (many of which confused "thrilling" with "Halloween scary"), I had to pick one or two and get on with it.  I almost read The Turn of the Screw again, I went for the source material to one of my favorite scary movies, instead.  In the end, I read Shirley Jackson's 1959 book, The Haunting of Hill House.

The book has been adapted into two movies, The Haunting (1963) and The Haunting (1999).  One of these movies is directed by Robert Wise, who never made a bad movie, and the other was done by the guy who made Twister and Speed 2: Cruise Control.  If you liked those movies, your mileage will vary. 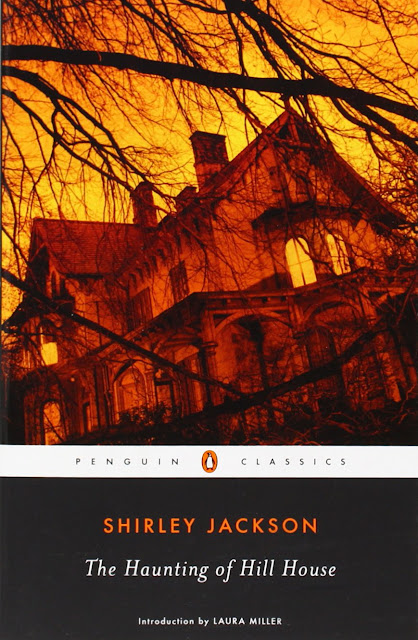 The good news is that the book diverges from both movies, and, really, after the introduction of the characters, has very, very little to do with the 1999 big budget CGI-FX driven snoozefest.  In the case of the 1963 adaptation, the movie and book match and diverge in similarity, enough so that I really wasn't sure what to expect from chapter to chapter.  Really, though, it's the perspective of the book that provides the greatest difference for the reader, and provides an experience the movie simply cannot as the camera must always show something going on, and cannot rely on the reflections of the characters in the same way.  The characters simply are on the screen, perhaps with hints of something otherwise, but the frame has to capture an interpretation one way or another.

Eleanor is a 32 year old woman who has spent her entire adult life caring for her sickly mother.  She has no profession, no friends, no home of her own as she is now in limbo, living with a sister who has inherited her mother's prickly nature and the sister's boorish husband and young daughter.  At some point in the distant past, she experienced a supernatural event as stones rained down upon her house, an act she grew up believing was the work of unkind neighbors, and perhaps it was.  We can't know for certain.

A parapsychologist, Dr. Montague, has scoured the country for those who have experienced legitimate psychic events, and has invited them to the mysterious Hill House, a 19th Century mansion built to house the family of an industrialist with what seems to have been an unhealthy parenting style for his two young girls.  The house was believed "born bad", already evil before the many deaths that occurred in the house even began.

The house itself is built with doors that hang at an angle to shut, walls that are not exactly at the right angle, and various optical illusions meant to make the house a showplace of the era in which it was built.  The effect, however, seems to unsettle and confuse visitors, not create any sense of wonder.

Of the many invitations sent, only two visitors arrive, Eleanor - who may have once had stones hurled at her by unseen forces, and Theodora, a beatnik who may be able to catch glimpses of the thoughts of others.  Also, the young man who stands to inherit the house, an idler and wanna-be playboy, Luke.

The perspective, always related in third person, remains almost entirely with Eleanor, from her long drive and escape from her life in the city with her hostile sister, through the open country and endless possibility of freedom on the road, to a journey's end at the house she instinctively knows she should not enter.

What the book does that the movie only barely considers, is that the house is haunted, perhaps, or perhaps Eleanor herself possibly quite mad in the wake of her mother's death and with some sort of reach out to the house or - and perhaps this is just me wondering - she has some latent telekinetic power that tossed those rocks at her own house and which now is rattling the doors as Eleanor slips further and further down the rabbit hole as she gives in to the stories and the impact of her situation.

I would not be at all surprised were Jackson to be horrified by my interpretation - but certainly I had to consider whether all of this were in Eleanor's mind, one way or another.

There's also a lurking sexuality or sensuality to the book that is so obscured, it's hard to know what Jackson intended.  It seems Theodora is sexually fluid, something you can pick up in the 1963 film as well, and the relationship with Eleanor who has no sexual identity whatsoever but imagines herself to have affairs that are the talk of an imaginary village, may be as well.  And whether Eleanor's attempts to know Luke led to a sexual liaison, and whether Eleanor and Theodora have a physical relationship is unknowable, but it seems there are hints here and there.

All of this is occurring under the scattered watch of Montague, who tries to apply a scientific method of study to the possible psychic occurrences of the house, something they all begin to experience and which seem may or may not be what they appear.

What's so fascinating about the book is that there are never clear answers, even as the book wraps.  There's no explanations, no easy answers, just more questions for both the characters and the reader.  Even the seemingly daffy Mrs. Montague shows the most sense in the final pages, her laughable methods for spirit detection suddenly no more nor less absurd than note taking and tape-measures on cold spots.

The book may not be frightening in a "boo: a ghost!" sense, but in the kaleidoscope turning of the perspectives, and the grasping with madness, with terror, and the unknowable, it stands alone in books or movies I've read or seen with the concept of "haunting" at the center.

Jackson's prose are something to study.  Intentionally repetitive, building a rhythm to the events, to the characters, returning like parts of a film score to highlight ideas.   She shows but does not tell, and by keeping the story tied so closely to Eleanor, she does an amazing job of stating what is occurring but leaving the reader guessing.

Really, I highly recommend this book, especially if you can get it in your hands between now and Halloween.  A standout read for someone looking for something spooky.

Read by Bernadette Dunne, who does a phenomenal job with creating characters from the dialog and even echoing a bit of Julie Harris in her Eleanor, Dunne manages to find the haunted people within the story, and really bringing the story to life.