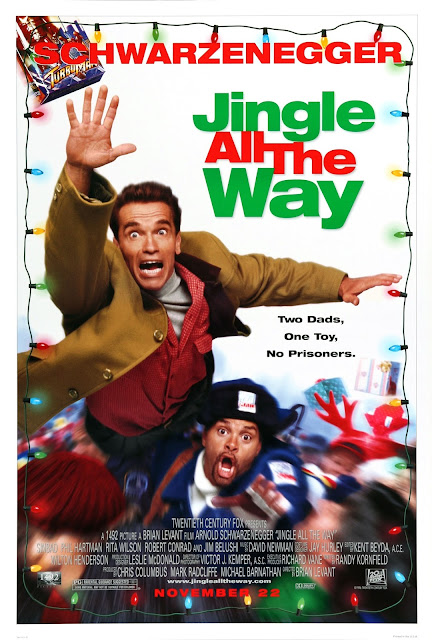 
If you don't recall, the movie is about hard-working businessman, Howard (Arnie), who is missing out on the joys of fatherhood thanks to loving his job.  He's married to Rita Wilson with Jake Llyod as the son he's constantly disappointing.  His son wants a TurboMan doll, and anyone who remembers Cabbage Patch Mania, Elmo Fever, Furby Insanity or anything at all about Frozen will be able to identify the Christmas Present Shortage Craziness which can, literally, end in the death of herds of people terrified of disappointing their kids on Christmas morning.*

He learns he was supposed to have picked up a TurboMan doll for his kid a few weeks ago, and not wanting to get in further trouble with both wife and son, sets out to find one on Christmas Eve and prove he's a good father.

Now, the movie could have ended here.  The Admiral would have sat me down, said "you know, we couldn't find one for Christmas, so we're going to get you one next year" and spent Christmas Eve with me, and I think 99% of kids would be fine with that.  But that's a pretty boring movie.  So, instead, Arnie hits the road and abandons his family on Christmas Eve in pursuit of the toy.  He makes a frenemy in Sinbad who is also out to find a doll, but it's a competition, so...

There are a few scenes that suggest what may have been in the original script.   The "Arnie fights an organized army of underground Santa's making knock-off versions of toys at a severe markup" scene comes to mind.  Arnie drinking with Sinbad in a coffee shop (I have to believe that was originally supposed to be in a bar).  But a gloss and polish was put on the movie to make it safe, even while the movie is suggesting Christmas is really about how funny Black Friday stampedes can be when people are only injured rather than die.

And, in the end, the movie isn't really for anyone.  Kids would be stressed out and maybe bored by it (Arnie is no great comedian, and he's certain not a physical comedian).  The idea that a neighbor (Phil Hartman) is trying to nail Mommy (Rita Wilson) would be... troublesome.  And the kid almost gets killed in a very oddly conceived concluding scene to the movie that could have easily dialed back and lost absolutely no impact.

But it's too dumb for most adults.

Aside from Sinbad in a really pretty funny helmet


there's nuts not much to recommend it.  Unless you're Hate Watching it.

I dunno.  I'm at this weird point in my life where I may just be finding out that I really am just not getting things because I don't have kids.  But, you know, if this is what you relate to on Christmas...  Bully for you, I guess.

Like a lot of Christmas movies, it seems caught up on presents or decorations or a holiday party and just fails to acknowledge what the holidays are like for most folks.  But a movie about small talk, avoiding politics and flipping channels until you find something Cousin Itt, Grandpa and your sister's weird boyfriend can all agree on - not really room for drama there - at least not the drama you want to pay to see.

But Movie Christmas exists in a strange world of its own, one in which Christmas is really about how we felt about the holiday in those years where Santa was maybe real.  There's no reference to it as a season of giving - it's a season of personal happiness and avoiding disaster.  There's absolutely a desire to dodge religion completely, which is actually pretty important to a lot of people.  All of this makes sense in the context of Ralphie's tale in A Christmas Story, but for those of us old enough to drive, the holiday has a different slant.  Either to be endured or enjoyed, to share and give.  There's a reason A Christmas Carol and It's a Wonderful Life come up year after year.

Arnie is a big enough name that Jingle All the Way hasn't been totally thrown on the junk heap, but it's far from a good movie by any measure.  But I think I made that clear by now.

I dunno, if you genuinely liked it, I guess I'd be interested in hearing your Why's and Wherefore's.


*my parents were pretty realistic with me on supply and demand, and I don't ever remember being disappointed on Christmas morning.  And sometimes, like "Rebel Transport" morning and "Blue Team Murray Bike" morning, my little mind was just blown.