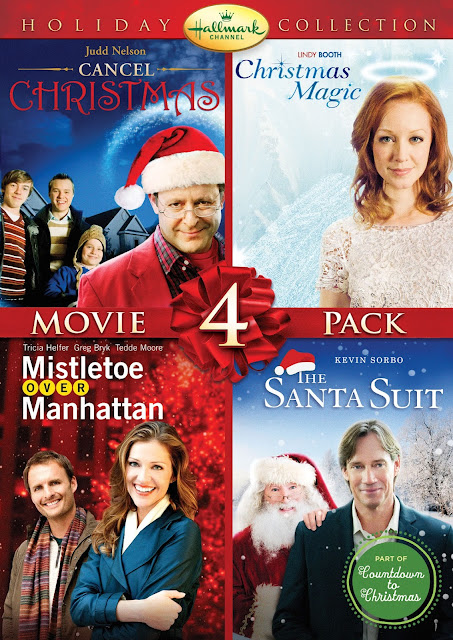 About ten years ago I was up late doing who knows what, and I stumbled across a Christmas movie about a limo driver who has to haul Howard Hesseman around as he hands out money while seeking the daughter he lost track of long ago.  The movie was called Crazy for Christmas (2005), and it was just astonishingly bad.

Shot on a TV budget on the sunny streets of Los Angeles during a season that seemed to not at all be the Christmas season, I found the movie oddly compelling.  A razor thin plot, name actor kinda slumming it, a completely un-buyable situation with main characters moving about with the logic of NPCs in a Sims game thanks to the the incredibly piss-poor writing, all with a cheap-ass score cueing you for the wacky scenes versus the heartfelt moments of weepy joy?

And I was hooked.  Everything I loved about talking over a bad movie I could find here with the added bonus of the sheer, brutal formula-driven weirdly non-religious-specific Christmas magic of each of these movies.

Now, very specifically, I consider myself a connoisseur of the Christmas movies on the Hallmark Network.  I don't quite have down the nuance of the movies on the Lifetime network, Up! Network (yes.  Up!), or the smattering of movies that have already made their way onto ABC Family.


The Hallmark movies start running nearly around the clock beginning at 12:01 AM on November 1 each year.  You don't even have the fake-blood of Halloween washed off your face, but you can tune in to see a divorcee who has fallen too into her job to realize that she's forgotten the true meaning of Christmas (and that the earthy, simple guy she knows from high school is "the one" for her) until she realizes work isn't everything and she can't sell the family business to that cypher of a businessman who wants both her business and her hand in marriage.  She may or may not also have a child who is precocious, only thinks about the happiness of the parent, and is utterly hideous.

Sometimes there's magic involved.  Sometimes Santa shows up (this happens A LOT, and it seems like they could save some money by just hiring the same Santa over and over for continuity).  Sometimes it's Santa himself who needs to find a Mrs. Claus.

The movies are clear about a few things: any job that isn't the lowest rung on the totem pole, or part of a small business or a hopelessly outdated job like wooden-toy monger (but still thriving in the imaginary small town communities of these movies) will be something that must be abandoned in order to find real happiness.  Anyone who seems satisfied with their life of work in the big city will find out they are living a goddamned dirty lie, and if they don't realize this, they will be a deceitful villain (although these, too, can be won over by cookie contests and homespun wisdom).

Oh, right.  Our heroes must always receive Old People Wisdom.  It can be delivered either by an aging actor/ actress, or by someone now quoting what their Dad/ Uncle/ Grandpa/ Manservant always used to tell them - and it will be just terrifically on the nose for the situation at hand.

One main difference between Hallmark movies and Lifetime movies is that Hallmark movies exist in a world in which there is no such thing as sex.  The only thing people ever do is kiss, then stare at each other with crazy-people grins on their faces.

If the movies acknowledged sex, they'd have to acknowledge how weird it is that Santa, motherly types, and the children of divorcees seem single-mindedly focused on getting our heroines some action by Dec. 26th.  At Santa's party, everyone gets laid.

Now, Jamie and I just watched a Lifetime film because it starred Mira Sorvino as Mrs. Claus and Will Sasso as Santa (I, too, was a little weirded out by finding Mrs. Clause that attractive, but it was kind of a gag in the movie), and Smallville's Laura Vandevoort played the divorcee.  It wasn't necessarily a good movie, but you have to remember Sorvino won an Oscar, so that's weird, and the movie didn't just acknowledge sex, it had a hooker accidentally sent to meet Santa.

So, if that's your cup of tea, maybe Lifetime movies are for you.

The production design is always a good indicator of how much budget went into the thing.  The rule of thumb is that if there's a decent budget, these movies will have Christmas lights in every shot, from every angle.  And if they really have money, you can tell they may have shot somewhere where it's actually winter instead of in LA in June, shoving people into jackets they must wear open so they don't overheat while trying not to let the sweat show.

Yes, you'll find folks slumming in these movies, or at least making a buck appearing in them.  From Oscar winners to That Girl Who Was in The Thing In 1997 But Didn't Ever Do Anything After That.  She'll be a divorcee mom in one of these flicks.

The lesser-known actors are often this weird, bland, catalog-good looking.  Jamie actually asked what I thought of one of the actresses after she came to the realization that the guys were "all supposed to be good looking, you can tell, but they are not".*  So I just kind of stared and stared and stared at the actress and finally realized I couldn't tell you anything about that actress if I wasn't looking at her.  Anyone TOO attractive, or prettier or more "city" looking than our heroine is a villain.  And our heroine must be pretty, but not threateningly so.  Our male leads must always be non-threatening as well, and must always dress in the finest clothes one can wear and still not look out of place at a truck stop.  A tie on anyone under the age of 55 is a sign of villainy.

And the movies are mostly, overwhelmingly filled with white people.  Sure, you might have a local cop played by someone who wasn't white, but you were guaranteed all of your main characters were going to be a bunch of crackers right up until maybe last year when "The Mistle Tones" debuted featuring one of the twins from Sister, Sister.  But, much like actually going to a Hallmark store, it's an overwhelmingly honkey-ish enterprise.

I don't write the movies up because I don't really know that these are movies, exactly.  They're sort of like the candies you find sitting out during Christmas that you'd never buy yourself, but you're sitting there listening to Uncle Morty drone on, and there's sugar sitting there next to you in a bowl, so you might as well eat it.  And at some point you realize you like the green ones, but the yellow ones are to be avoided, but the pina colada ones are kinda the best ones.  So you get to know that bowl of candy.

I should also mention, I rarely, rarely watch one from beginning to end.  They come on, and I wander off partway through, or I tune in with 30 minutes left, and applying the template, piece together the story "Okay, so, Alicia Witt is our divorcee, and she no longer wants to sell the Orphanage to the Sausage Factory she works for, and the guy in the denim jacket is her childhood sweet heart, and the guy in the natty suit who is smiling - who works for the sausage factory must represent evil, evil financial stability.  And... There's Santa.  GOT IT."

So, people, we've got a month left of these things.  JOIN ME.  Watch a ton of these things.  They are truly amazing.  And as much as Jamie yells about not wanting to deal with Christmas until we pass Thanksgiving, she's right there next to me scolding Lacey Chabert for not realizing "that is really Santa, you nitwit!".

BTW - I just found this drinking game, so I know what I'm doing with my post Turkey Day weekend.

Is this the kid with the flat head?