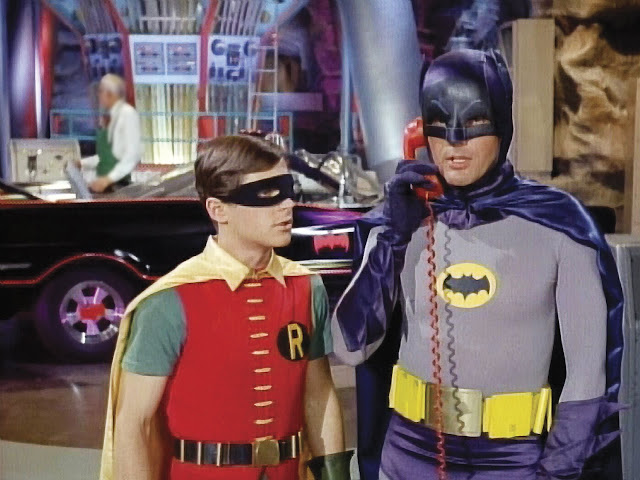 Longtime readers will know - Batman, the TV program, is probably ground zero for everything you see here at the ol' blog.  Born in '75, obviously I was too not-yet-in-existence to catch the show when it premiered in 1966, and I think my dad was in Vietnam and my mom was in college and not watching TV when the show hit the airwaves.

Family history says my first words included "Batman".  Or, more specifically, "Mat-man", as I couldn't quite work that "b" sound quite yet.  The story is that my mom needed to fix dinner for my brother and myself, and at some point she figured out I'd hold perfectly still for half an hour each week night when she'd point me at the TV while Batman played in syndication, and the rest just sort of played out.

As big as Star Wars may have been in my early childhood, so, too, was this version of Batman - or so I am told.  But I have almost no memory of watching the show at this age, I just remembered the characters and sounds of the show.  It fell off the syndication wagon in my local viewing area for a number of years, and didn't return until 1989, when the popularity of the Michael Keaton Batman meant someone decided to cash in.

You'll read accounts from folks who were there when the show came on, back when they were kids, and they saw it as a straight adventure show.  Which is how I saw it.  And getting mad that their parents and other adults found the show hilarious (I have no such recollection).  Since that re-release and my somewhat slack-jawed surprise at learning the show wasn't just someone misinterpreting the material, but making a genuinely funny - something I realized during that summer between middle school and high school - I've been a fan.

The kids will not understand this - but this show was actually reviled by comics folks for a long time.  Not so much the actual show, but the roaring success completely colored the public's perception of superheroes for two solid decades.

You have to keep in mind - back then you had 3 TV channels and PBS and maybe a UHF channel or two, and maybe two local papers, but only took one.  So everyone knew that show, and it colored the perceptions of a couple of generations.  Being at odds with the mono-culture was an act of rebellion and/ or a sign of being anti-social - and that's why you kids and your tumblrs are unclear on why "geek" is now meaningless.

The original drafts of the script for Superman: The Movie were more or less yuck-fests until Dick Donner came on, when Superman hit Broadway, it was a brightly colored modern-era gag for adults, the first canned pilot for Wonder Woman was a sitcom about a delusional young woman, and Marvel struggled for decades to get solid funding for anything that wasn't just coating Lou Ferrigno with green paint (and I'd argue, The Hulk is barely a superhero).   When you talked superheroes, everyone - adult and kid alike - had an expectation that you were going to be making fun of them.  Saying no to that idea was one thing.  Actually refuting that idea was insurrection, especially at school where teachers really, really did not want you saying "Batman is rad."

Bear in mind, I'm talking about an era 30-odd years after Seduction of the Innocent, and 20-odd years after Batman was giving Robin nutrition tips.  The public didn't make a separation between whether the joke of the TV show was specific to the TV show, or if the producers were directly translating a joke of an American medium and just putting it on TV.  Those "Baff!  Wham!  Ka-Pow!" headlines didn't come from nowhere.

Since 1989, though, that's changed a lot.  Americans are better versed in the world of camp, and I think the kids speak the language of the TV show pretty readily.  The look of the show and the sheer volume of episodes may be pure 1960's, but the humor is thoroughly modern.

I've written previously about Adam West as The Bright Knight, and how I believe in this version of Batman as deeply and thoroughly as anything Christopher Nolan put on screen or what Frank Miller put in a comic.  They're all important.  They're all mirrors and markers of their times.  He and Burt Ward are terrific versions of Batman and Robin.  They never wink, they're always on, and it's a wonder to behold the two in their outfits, wearing them with the seeming total sincerity with which they also delivered their lines.  But, you know what?  Secretly, I believe a bit in not just the campiness (yeah, I like a good joke, too), but in the square-jawed hero who is going to do the right thing, no matter how square he may seem.  We relegate that sort of thing to kiddie media - or at least we used to, I don't really know anymore.  But when Batman went Dark Knight, it wasn't that hard for me to switch allegiances to Superman - a character who, until very recent history, managed to stay square as hell, aware of the difficulties and absurdities of his position, of his costume, of being an icon of goodness.  I mean, the '66 Batman may have had an iffy outfit and been worried about sneaking past Aunt Harriet, but he was the ultimate good-guy.

The world needs more people working as hard as Adam West in a shiny cowl at being good guys.

The villains were amazing.  And re-watching the show on BluRay is just that much more fun every time Frank Gorshin shows up (no one has or ever will top his Riddler).  And, no, I can't pick one Catwoman.  They've all got their own approach.  And all hysterically diabolical.  Sure, murder seems to be on the menu, but it's nothing they want to do without a Rube Goldberg trap and a lot of glitter.  Throw in some colorfully themed henchmen, and what's not to like?

I could talk about the car forever.  But, let's just stop at:  it's my favorite Batmobile.  Even more so than the Keaton car or the Tumbler.  I grew up with that Batmobile in my head, and everything else is cool - I have shelves of Batmobiles (seriously), but nothing beats the '66 George Barris design.


I am totally thrilled we've come full circle on Batman.  The show and the Batman '66 movie deserve a second, third and fourth glance.  While we've lost a lot of the actors in the years since the show ended, I'm glad Adam West has seen a resurgence in popularity and that he and Burt Ward are now huge celebrities at Comic Conventions.  Those guys did it right, and they deserve the fandom.

There's so much to like, and it's so much fun.  And, for those of you with kids, it's action-packed, colorful, kinda harmless and you'll find it really funny.