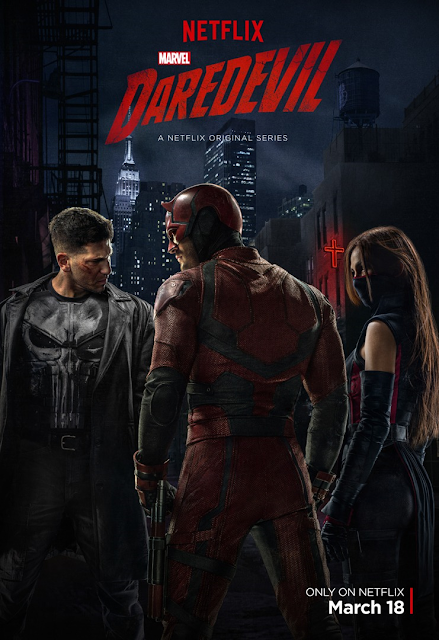 
This season introduced us to Frank Castle, known to comic fans and B-movie aficionados as The Punisher.  On its surface, the Punisher seems like an easy translation to live-action.  He's a guy who lost his family in a shoot out between rival gangs, and came out of that experience hellbent on killing anyone who even looks like a gangster or criminal.  But movies made in 1989, 2004 and 2008 would inform you that maybe making a Punisher movie that's watchable is harder than it looks and should not include John Travolta.*

In general, I'm not much of a Punisher reader.  The character seems to need excellent writers working in top form or it's just a cycle of predictable violence.  I've read the character in bits and spurts (most recently when Rucka was writing the character), but never stuck with it for long.  Even bailing on Ennis before the series became the acclaimed version they seem to be referencing on the show.  Don't worry, I picked up a trade a short while ago to get started.  Ennis never does me wrong.

And, honestly, the Punisher of Daredevil Season 2 is the first time I've really felt like the Punisher was a three-dimensional character and not just a skull shirt, machinegun and absurdly terrific lucky streak.  John Bernthal's performance and the story's attention to making sure that Frank showed flashes of actual humanity (and maybe wasn't treating the death of his family like someone stole his bicycle, and boy was he pissed) made a Punisher fan out of me.

We also are introduced to Miller-creation Elektra Natchios.  Is it the bat-shit-crazy Elektra of the comics?  Not exactly, but as much as you could perhaps make the character a vicious and mostly unsympathetic but fascinating character for TV audiences.  I guess the biggest difference to me was - I simply don't remember Elektra ever really talking, and here she's quite chatty.

With Elektra, we get introduced to The Hand, and - for that - I could not be more pleased.  I'm still a "Too Many Ninjas" guy when it comes to comics and other media, and this may be some of the best I've seen that of idea on the screen in decades (The Crazy 88 aren't ninja, right?  And 88 is, I am afraid, a fixed number.).

For those of us who found ourselves apologizing to our in-laws after convincing them the 2003 movie of Daredevil was totally worth us all going to see, we had our redemption in Season 1, but in Season 2, we got something approximating Elektra of the comics, and not Jennifer Garner, The Human Peep, trying to convince us she was a meany with swordy things.  So, that's a win in my book.

As was the real story of Daredevil S1, a 13 episode compare and contrast between Wilson Fisk and Matt Murdock as they overcame shattered youths to try to protect Hell's Kitchen in their own ways, Season 2 asks - what is Matt Murdock, and how far will he go?  Frank Castle and Elektra provide points of contrast - Castle trying to deal with his grief by way of a bodycount and what he sees as the permanent solution to the issues he thinks Daredevil lacks the courage to take on.  Elektra - well... she's the past, positioned as the opposite of driven, vulnerable Karen Page, she unleashes in Murdock a side he uses to put on the suit, and asks what it would be to live that way forever.

I don't want to bother too much with specifics.  You've watched the show or you haven't.  You will or you won't.

If last season left you confused as to who this show is for, this season makes it clear that it's about as much for kids as Deadpool.  There's a whole lotta blood in this season, and a lot of "let's go ahead and show that" stuff that maybe was okay if we just knew what happened from reaction shots.

It also leaves a lot of unanswered questions, feeling confident that we'll see at least another season, plus whatever happens in the coming Marvel Defenders franchise with Jessica Jones, Luke Cage, Iron Fist and whatever else is on the slate.

This season had some rockier parts and sometimes gave way to TV-ish gaffes and ideas that likely seemed good on paper, but ended up becoming problematic.  Karen Page may have been spread too thin across too many plots (that's Matt's job), but you don't really notice until you do.  The Punisher's final scene was, maybe - while narratively logical - maybe a smidge cheesy.  And a fist shaking Nobu all but yelled "Get Them!" a few times.

But, minor quibbles to me.  This is a hard show to pull off, and I think they did a better than workmanlike job, and the cast was in top form all the way through.  I hope Charlie Cox is spending his downtime between seasons just sitting in a whirlpool and recuperating.

I dunno.  What'd you cats think?

*the most recent feature, Punisher: War Zone has earned a reputation as both a pretty strict adaptation from the comics and a better movie than its ratings and reputation.  I was, I admit, kind of bored by it after about fifteen minutes.  Even gratuitous violence gets dull after a bit.
Posted by The League at 4/15/2016 12:15:00 AM

I'm glad everyone seems to have found a Daredevil show to like. I must confess though that my wife and I bailed shortly after Elektra showed up, from boredom.

I really like the show's versions of Foggy and Karen. Also Rosario Dawson's nurse. These characters seem honestly drawn, and I want to see more of them. Not so much for everyone else.

On a more superficial level, I hate the costumes and the action is too muddled and dimly lit to see what's going on.

I also didn't buy Shane from The Walking Dead as Frank, who was an emotional crux of the season. So i guess kind of a lynchpin. As bad as that 2004 movie was, Thomas Jane was perfect. It's a shame he didn't get another shot at it.

And I miss the Kingpin.

I haven't quite finished the series, but I'm really liking it. I would agree that Elektra isn't quite wild enough, BUT, to be honest, some of the crazy depictions of Elektra in the comics never quite jived with the fact that she was a realistic romantic interest for Matt Murdock. The show does a good job of keeping her fairly chaotic while making their relationship plausible. I actually like the costumes. Or I like Daredevils' costume. And I think that the fight scenes are actually done better than some of the feature films that I've seen (I was watching part of The Dark Knight rises yesterday, and it occurred to me that the fight scenes in the Daredevil series are actually done much better).
Overall, I really like the show. Good adaptation.

@stuart - wow, we have kind of polar opposite opinions of this show short the appreciation of Karen and Foggy, I guess. I understand not wanting to see the same Daredevil story told, but I kind of think of all of this as "the" Daredevil story, so it's as in line with expectations as Robin Hood having a quarrel with Prince John and the Sheriff of Nottingham. It's the story I expected when I hit "play".

I do think their approach to Frank Castle is different and off script from the comics, and it may be why I cared about the first time since high school when a skull t-shirt and a bad attitude were all I needed. It works that he seems inhuman in the comics - to an extent (which I find dull in round 4 or 5), but I liked seeing him actually at wit's end and broken.

And, yeah, I quite like the costume. It seems practical, gives a great silhouette, and they made the helmet relatively non-ridiculous. Really, the only action scene I found too dark was, ironically, the final action scene. I think they let their ambition get away from them.

And, if you'd stuck around, you'd have seen some Kingpin. Spoilers.

I really enjoyed Daredevil season 2, like you I thought Jon Bernthal's performance as The Punisher was great but the real breakout for me this season was Elden Henson as Foggy Nelson. He really commanded some of the scenes this year and should be up for a best supporting actor Emmy if that is even possible with a Netflix series.