So, the reason I went to Ireland was to attend a conference called "Open Repositories 2016", which is sorta/kinda the premier very-specific conference for people who do what I do, professional-like.  Unfortunately, I didn't take any extra days or time to go touristing, so I didn't see much of Dublin and nothing of Ireland beyond a couple kilometers of my hotel.

OR is one of those conferences that has great material in every session across 5 rooms running concurrently, is competitive to present in (we got in!) and that's still only, like, 40% of why you go.  The rest is the out-of-band conversations you have after hours.  This means you're at the conference for formal stuff from 9 - 6, then at conference social events until maybe 8, and then you go out with conference people to get the real work done until, oh, 1:00 AM.  Then do again until you get on a plane and leave.  It's a long 5 days.

I did skip out and go see a sight as it was on the Trinity College campus, but the rest was finding bars and restaurants and holing up for work chatter.  I really like the people I meet up with at conferences, but let's be honest, what we have most in common is what we do between 8 and 6 at our desks.

I flew with my boss, Kristi, and co-worker, Gad from Austin to Heathrow, Heathrow to Dublin, landing in late-afternoon.  We caught a cab to our hotel, Camden Court, and en route, we got a brief history lesson of the 1916 Uprising from the cabbie.  He is still not much of a fan of the British.

I didn't take many pictures while just walking around.  Our hotel was in a nice area of town, buildings all adjacent and between 3 and 6 stories high, for the most part.

The weather is muggier than I expected, which I figured the constant drizzle would take care of, but it did not.  The temperatures themselves were quite nice, but the place is as humid as Houston, which explains all the green.  And it also never freezes.

It's not a sprawling city like London, and it doesn't have that manic buzz to it, and, honestly, I felt a lot more comfortable in Dublin for that reason.  It also didn't have the near ghost-town feel of Helsinki where I wasn't sure there were enough people out and about to justify the fact this city seems as big as it is.

On Monday we went to workshops all day, took a call back in the US with a 6 hour time difference, and afterward I went to a social on a green facing a Cricket field.  I attended a day-long workshop on GIS and search capability, because I am cool.  After the social (where I had my first Guinness of the trip) went for dinner and drinks at Fade St. Social.   Drinks were on the roof of the place, which was really very nice.


Tuesday the conference began in earnest and I attended some good sessions in the morning.  In fact, my boss presented and I think gave a fantastic and honest presentation about our efforts to get into Research Data Management, something we're doing, but we're not pretending like we've totally cracked that nut.  Really, as good as the presentation was, she nailed the QA section which is usually where people get tripped up.

A pal and I spotted a place in the program we thought we could skip, so we bought tickets to The Book of Kells - of which you will see no pictures here.  It's a circa 800 AD illuminated manuscript of the first four books of the New Testament.  It's really something to investigate if you have the chance, and right there on the Trinity College campus in the library.

Part of the cost of the ticket is also going up into The Long Room Library, which you may have seen in movies and which is absolutely the inspiration for the Jedi Library in Attack of the Clones. 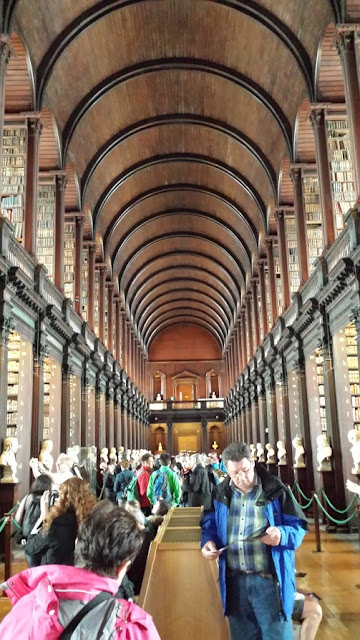 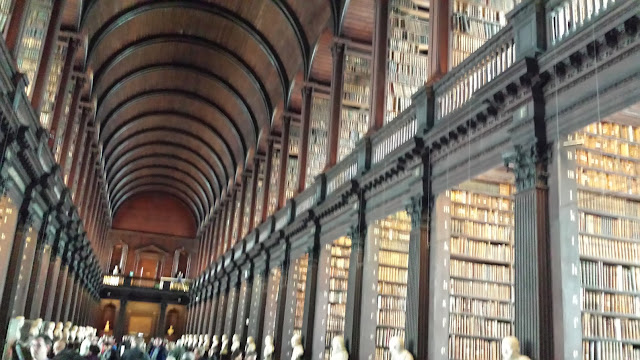 That afternoon we headed over to a reception at Trinity College, but, sadly, there was no Sorting Hat.

Afterward, on a recommendation, we went to The Pig's Ear, and had a fantastic meal.

From here we walked over to Against the Grain, a nice, quiet pub with a terrific beer selection.  And, man, is Digital Libraries full of beer dorks.

Wednesday was a whole lot more conferencing.  Lots of good sessions including one on web analytics that I think we'll be implementing.  Those kids from CERN know a thing or three.

After, we went to the Cafe en Seine to talk shop about some upcoming technology coming out of Stanford.

And then over across the street to The Mansion House venue for the "gala dinner".  I use quotes because it ain't like we change into black tie and gowns for the occasion.


There was also a karaoke section, which made a good portion of the audience flee, but I had a Guinness and sat back and watched my colleagues perform amazing tricks.

Thursday was "Bloom's Day", a sort of holiday in Dublin as June 16th is the day described in James Joyce's Ulysses where Leopold Bloom walks the streets of Dublin.  Some folks try to recreate the day, some dress up in Edwardian attire to help create an atmosphere, and some of us wish we'd read Joyce and knew what was happening.

We wrapped a tad early as we hadn't done much exploring, but I was kind of exhausted so explored my room for about an hour and changed clothes.

The bar next to my hotel was The Bleeding Horse, one of the oldest pubs still standing in Dublin, and mentioned in Ulysses.  The passage in which the place is mentioned is carved in stone on the front stoop.  After sessions ended, Gad and I stopped in for a couple of pints and a Teeling's. 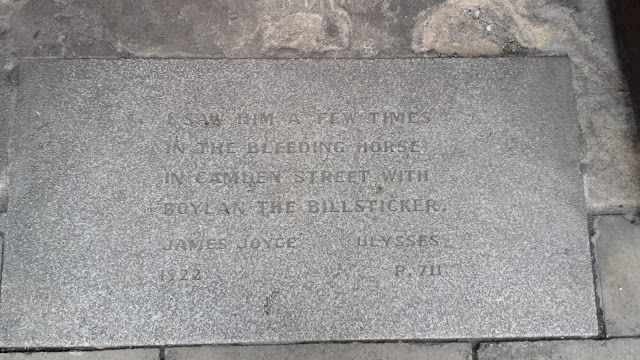 From there we dashed across town to meet some folks for, you guessed it, a pint.  We passed down a fancy business and shopping corridor, Grafton Street.  Buskers, shoppers, people heading home from their day.  It was pretty nice.


We finally made it to Bowes, had a drink with some colleagues.  A very comfortable spot and a gentleman at the bar got very excited when he asked where I was from and I said "Texas" (Texans always say "Texas", not "The U.S.").  "Not Austin?" he asked.  "Absolutely," I answered, and we had a great conversation about his trip across "The Dirty South" from Miami to LA.


Then it was off to dinner, so I snapped some pics on the walk. 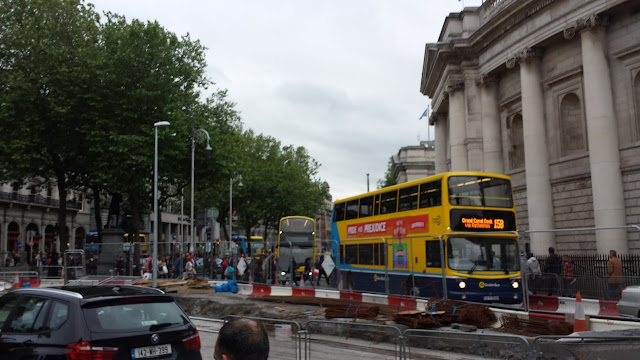 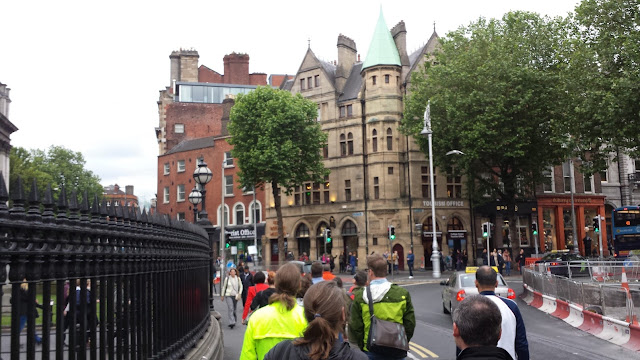 Like I said, it was Bloom's Day, and there were some small events across town.  Lots of hats. 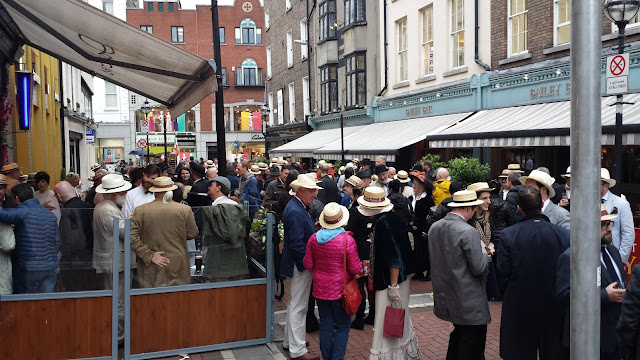 For dinner we went to SMS, and had a lovely seafood dinner with Texas people, invaded by Tom from Stanford.

Afterward I went back to the room to get a couple of hours sleep before my 3:00 AM wake-up and flight out at 7:40 from Dublin to Austin.

I didn't get to see much of the town, and for that I am sorry, but what I did see, I really liked.  There's a lifetime of history to learn there, the people are great, and they have a culture I envy a bit, from what I gleaned from my brief peek into the city.   A lot of pride in who they are, kindness to visitors, and a perspective on yesterday that points the way toward tomorrow.

I'll go back as a tourist at some point.  In the meantime, here's me at The Bleeding Horse, raising a glass to Dublin. 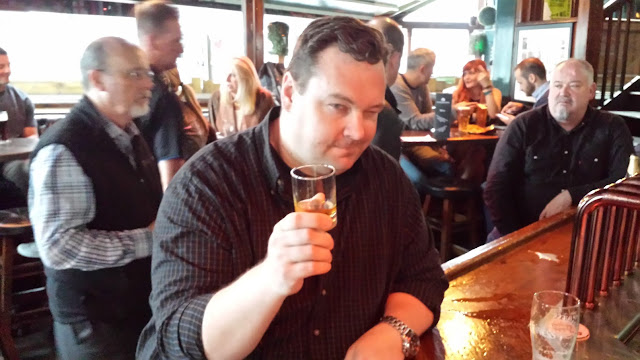 Looks like a good trip. Not a single leprechaun to be seen, but a good trip, nonetheless.

It was a good trip. I got to see more than i normally would, but it's also work, which seems to get lost on everyone. "Oh, suuuure you were working." Which is a little irritating to hear after you just pulled 4 14-hour days in a row.