Signal Watch Reads: Failure Is Not An Option - by Gene Kranz (2000, audiobook) 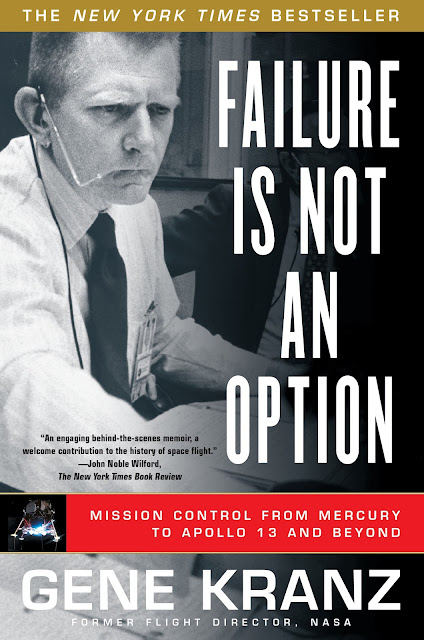 If you've seen Apollo 13, you've seen Ed Harris as the vest-wearing Flight Director Eugene F. Kranz.  Kranz served with NASA from the Mercury missions straight through into the mid-90's.  Truly the case of The Right Person in the Right Place for the Right Job, Kranz is famous for his post Apollo 1 disaster speech at NASA where he defined the "tough and competent" mantra of NASA's Mission Control Center.  He was, as evidenced by Ed Harris playing him in the film, also one of the Flight Directors on Apollo 13 who helped pull together the plan to bring the astronauts safely back to Earth.

But Kranz was there during Gemini, working out procedures and flight plans, debating the wisdom of rushing our first EVA to catch up with the Russians, and he was there for Apollo 11, landing Aldrin and Armstrong.

As you can imagine, the history alone is worth the read, and I'll be picking up some more memoirs and. or histories of the race from Mercury to Apollo 17 and beyond (I mean, my earliest solid memories are around the Space Shuttle, and so a history of the development of the Shuttle Columbia would be more than welcome).  But Kranz's personal take is as absolutely fascinating as it is inspiring.

The view from the Flight Commander's Control Console takes us to the point of teeth-gritting responsibility.  While thousands have contributed to building the rockets and space-craft, and many, many others have been involved all along the line, it's the MCC that makes the decisions to abort, must know their systems, the craft, the management of the astronauts, etc.. well enough to make moment by moment calls and respond to each challenge as it surfaces.  Each decision impacts lives of the astronauts, and every choice could be the one that leads to disaster.

And, the Flight Director is, ultimately, the person who is leading his or her control team and responsible for the calls that manage the Flight during their shift.  Anyway, my job suddenly seemed a lot easier.

Most absolutely I gained an appreciation for what all those pocket-protector-wearing folks are up to in MCC.  We tend to think of our spaceflights as these routine operations we've had down pat since 1968 or so, and I say this not to shake your faith in NASA, but no matter how well prepared they are, no matter how many precautions they take - every single time we send up a rocket, it's more or less a very high risk test flight.  This is not launching a hundred flights a day from the airport.  We just don't put that many people into space.  With each flight, there's something new, there's a thousand thousand parts, unnatural chemistry at work, physics being exploited.  Those people are sitting in Master Control not to simply monitor, but to be ready with answers and advice for when something goes wrong.  And something is always, inevitably, going wrong.  Especially when you go back to sending Alan Shephard up in a can and you're doing this for the first time with a guy who can talk back to you.

Kranz lays out each mission in simple terms, the goals and objectives, who some of the players were as NASA grew from basically a very well-funded start-up to more of a large organization by the time Apollo rolled around.  He talks in simple terms about the hardware, the challenges and it paints a shockingly detailed picture of those first decades we took on the challenge of space travel.

He discusses the highs and lows of the job, and you can see how, even as he was promoted up to management, there would never be another job like Flight Director.  There's no question that he devoted his best years to what I'd consider the most worthy of causes, pushing the boundaries of mankind's knowledge, and the book does a phenomenal job of conveying the source of the highs and lows.

One of the criticisms I felt was unfair after reading Theodore Roosevelt's The Rough Riders was a criticism that Roosevelt was making it sound as if he had won Cuba on his own.  My read was that Roosevelt was more than happy to pepper the book with names if not a particular lot of details about those folks as he gave them credit for their contribution.  Kranz makes his various positions clear both before NASA, during the early days, Mercury and then as Flight Director during Gemini and Apollo - but he is still a team builder all these years on.

Not only does Kranz give due credit, he carefully explains who each person is and explains how they all fit together.  For each flight, he was one of three Flight Directors (3 eight-hour shifts).  But every role is important, and Kranz makes sure to mention folks both in MCC and elsewhere.  He clearly had close relations with astronauts, engineers and all manner of folks, and he'll even mention bar-owners.

Of course the Apollo 11 and Apollo 13 Missions are given a hefty page count.  Kranz knows what folks are looking for and no doubt he's had to recount his stories many times.  And, yeah, the Apollo 13 story is no less (perhaps even more) harrowing when told not with sweeping music and Ed Harris' lantern jaw at Flight, but from the perspective of a man in his mid-30's trying to hold an organization together to pull the impossible into the workable and save lives.

Kranz is a dreamer and a believer in an amazingly pragmatic fashion, and it makes for a terrific read.  He even finishes his book with a multi-point plan for rebuilding NASA, which he clearly (and not incorrectly) saw as tarnished and diminished as of the book's release in 2000.  And the plan actually sounds fairly solid - were folks not getting elected right now who see any non-Defense spending as a crime.  I'd be curious to know what Kranz thinks of the private companies racing into the void left by the past 16 years of neglect of our manned space missions.

It's not often I find a book not just inspiring, but applicable.  I've been thinking a lot about the procedures and processes Kranz and Co. put in place at NASA and it's had me thinking a lot about my own office, and - yeah, we could be doing better.  They've already heard it.  And from a personal perspective, keeping an eye on the success of the mission and finding satisfaction in successfully completing the mission with excellence, that toughness and competence that Kranz talked about - that seems like a set of good goals to strive for.