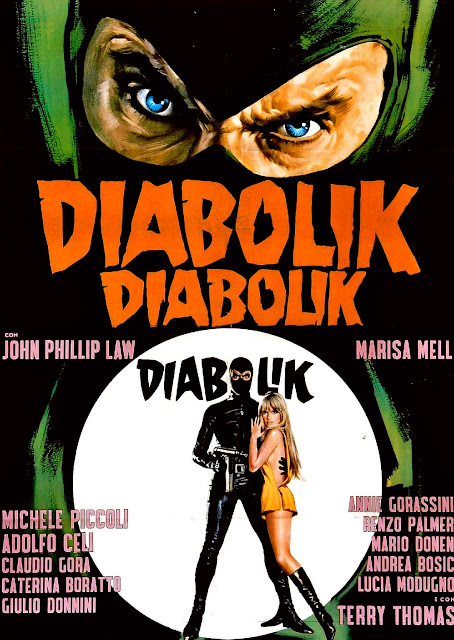 There are no superheroes, so it's just the cops against Diabolik, and they're hopelessly outclassed.  Even when their plans seem foolproof.  That's just catnip for the man in the mask.

Filmed in Italy by genre director Mario Bava and produced by Dino de Laurentiis, the movie stars John Phillip Law as Diabolik, Melissa Mell as Eva and Michel Piccoli as Inspector Ginko, is from a swinging 60's era of adventure films aimed at teens and up.  Visually, the movie is remarkable.  Bava's background as a cinematographer is on full display as every shot is terrifically, sometimes beautifully conceived - using the image to convey meaning in a movie that could have easily just phoned it in and let the girls in Italian fashions, the gunplay and fancy cars take over.

While Ginko works to capture Diabolik, it's unclear exactly what the populace thinks.  Indications are that they're kind of rooting for the arch-criminal even if he's racking up a bodycount.  He's pulling off the impossible, and that seems to spark the imagination for the public as well as the audience.

Frustrated with the nation's inability to capture Diabolik, the government begins bending rules, and maybe gets in bed with some folks they shouldn't, and the pressure is on.  With the mob now involved, no matter how large his giant, spinning bed might be, and covered in no matter how much money, he and Eva might not be safe.

The movie is so bizarre and over the top, it's fascinating, laugh-out-loud funny and a bit mesmerizing.  And despite what may be somewhat dated here and there, it still works like crazy.  Frankly, I'm surprised this movie isn't a bigger deal in the U.S., other from the fact that we like anti-heroes, not necessarily rooting for straight up criminals.  If we need to root for a heist-man, he has to have a sweet kid or something.  Or a code of principles or something.  Diabolik doesn't have any of that.  He's a really smart guy with some amazing stuff, a good looking partner/ girlfriend, and he will kill you if you stand in his way.

Still, you gots to like the guy.  He makes robbing and stealing seem like a terrific idea.  And he is absolutely not a guy to be screwed around with.

This movie has style in spades, from the performance of John Philip Law as the near-silent Diabolik to the wardrobe of Marisa Mell to the camera work and the score, and, of course, the sets of both Diabolik's hide-away and the rest of 60's wherever-this-is-supposed-to-be (maybe England?).  Even if you don't find the story particularly compelling, there's enough else going on in the parts that make up the whole to at least keep you staring at whatever the hell is going on with this movie.

This one made it onto MST3K, so it has that going for it.

I found that Diablolik was also pretty much the ultimate boyfriend. She would ask for the most improbable gifts, and he'd put on a heist to get it. He involved her in his work, and they seemed to get a kick out of doing it (like the whole press bit).

Anyway, I'm glad you enjoyed it. It's a great bit of movie.

Are you serious? Well, I need to find a copy of that MST3K episode.

And, yeah, I totally agree. He's all about inclusion and partnership! And underwater space vehicles!