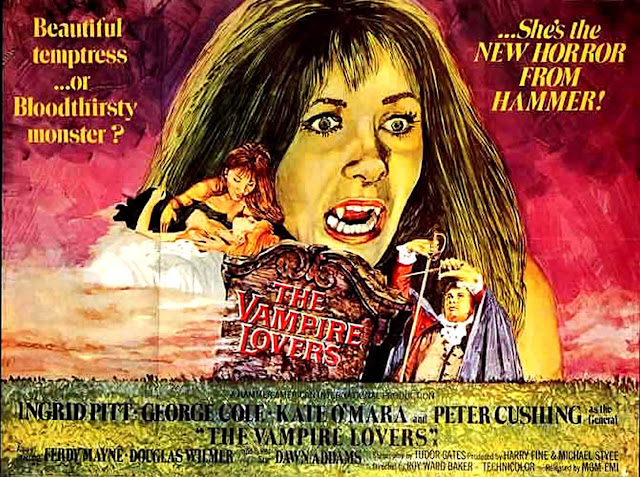 Well, goodness.
We intentionally looked into the sub-genre of Lesbian Vampires with the not-so-subtly titled Vampyros Lesbos earlier this fall.  But it seems that this movie is a highlight of the genre, which I didn't actually know until I started clicking to some context clues early on and looked up the movie on Wikipedia.

It seems The Vampire Lovers is an adaptation of a book, Carmilla, which predates Dracula by Stoker by a good 26 years.  This search, in turn, led down a deeper Google-hole, but it seems that Dracula is more or less the less-lesbian version of a story of a vampire who takes a fancy to young women and drinks their blood, causing all kinds of havoc for everyone around them. 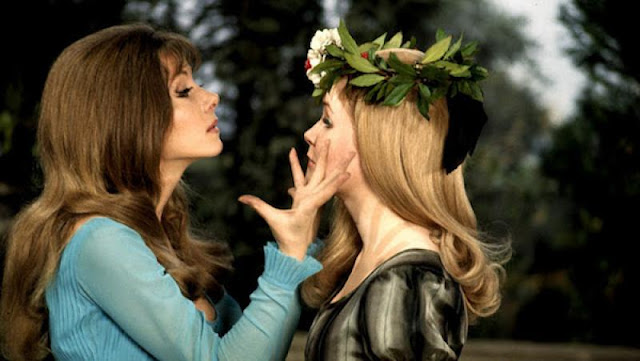 The movie follows Ingrid Pitt (something like 32 at the time of filming, but supposedly playing someone who supposedly looks to be a girl on the verge of womanhood) as Carmilla/ Marcilla/ Mircalla - our vampire who goes about seducing young society women and then draining them of blood.  That's more or less our plot, and, of course, there are old white men who are onto her who haven't quite put the pieces together who want to kill the vampire, Van Helsing style.

I was a little surprised at the straight up sexuality of the movie as early Hammer films were always more about just putting buxom young women in low-cut empire-waist dresses.  But, yeah.  There you go.

It's a bit awkward to write about, thanks to the sexual nature of the film and, hey, my dad reads this site (Hi, Pop!), and it's actually one of the better Hammer Horror films I've seen.  It wasn't... how does one say without sounding insulting...?  It wasn't sort of silly in it's execution.  It was genuinely a bit creepy, and Pitt is better in the role than she needed to be.  I can see why she has her following.

The characters in the film are a bit stock - the young women are all that virginal innocent you get out of the Mina Harker-types, their beaus are brash, Peter Cushing is in hero mode and heroic as "The General".  But the story moves at a pretty good clip, and there's a wee bit of "I don't know what will happen next" in a plot that otherwise feels well worn.

As I understand it, this is the first in a trilogy of movies, and - based on the description - I'm about 85% certain that back in college I saw the second film, Lust for a Vampire.  I don't know that I'll follow up as those movies don't feature Ms. Pitt, but I may check out Countess Dracula or The House That Dripped Blood, which do.

The book Carmilla is REALLY good. Pretty breezy read, too, unlike Dracula.

Interesting. Yeah, the book of Dracula is slooooooow going.

I am continuing to build my reading list, so this is getting added.

I'll again throw out Vampire Circus as a title to keep in mind. It pops up on Amazon and Netflix now and then...as the Hammer films seem to do. Relevant themes for today. One could probably do a justified remake today.

I'm realizing I don't actually know hwo to read the Vulcan Video catalog, but it looks like they may have it at the South location. I'll seek it out!