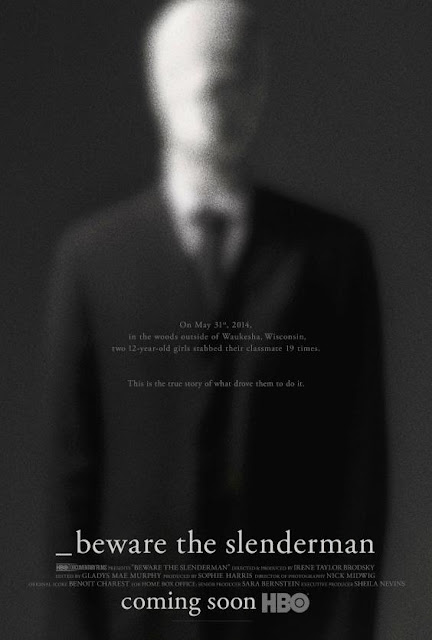 I spend some amount of time (read: all of my time) online, and thus was aware, somehow, of the fictional boogeyman, The Slenderman.  It was one of those things that I said "what is that?", Googled it, saw it was a meme sort of thing the kids were into, and went about my business.

The Slenderman was created in the world of online fictional storytelling, and as these things sometimes do, it took off and became an idea that flooded outside of the scary-stories site where The Slenderman first appeared.  A quick Google search will turn up thousands of hits.  He's an otherworldly figure who haunts children once they become aware of him, and will either murder them or befriend the most pitiable (I think).

In 2014 a new story broke out of Waukesha, Wisconsin that two 12 year-old girls had lured their friend into the woods and then attempted to stab her to death in order to impress/ appease "The Slenderman", which... to an adult sounds a bit like committing attempted murder to appease a movie or television character like The Cryptkeeper or something.  I don't want to belittle any of this, because two little girls really did have some sort of break and a third was gravely injured and will no doubt suffer longterm effects, but as someone well beyond the age of the girls who made this decision and with a "I existed before the internet" point of view, it's very hard to imagine the world that created this tragedy.

The HBO Documentary Beware the Slenderman (2016) dissects the scenario that led to the incident, looking into the world of the girls, what's online and how they related to it.  Honestly, I don't think I've ever seen a doc that had this sort of access to the parents of perpetrators of an act like this who were clearly involved and participating in the film within a couple of months of the girls' incarceration and into the trial.

You'll note I'm having a hard time using the word "crime", although that is clearly what occurred.  Two girls, in deliberate, pre-meditated fashion, tricked their friend into a situation where they could kill her.  That is murder.

And, surely we think of situations - like the one which recently occurred only a couple of hours from Austin in which a 10-year-old special-needs kid was lured into a field outside of Kerrville and set on fire by children he thought were his friends -  as a crime.  But we also know that children rarely work maliciously or with true understanding of the impact of what they're doing.  There is a reason we do not blame toddlers who get their hands on a gun and squeeze the trigger.

Of the two perpetrators, neither set of parents is in denial about what occurred, and so the story turns to how and why.

The origins and mythology of The Slenderman - who first appeared in only 2009 - are examined both as narrative construct/ modern myth-making and as a function of such a character in a 21st century setting.  And, I think most significantly, an examination is made of how an idea can spread like a virus, including via the ubiquitous iPad.  That two young girls could believe in this cartoon as a living thing is never fully resolved, that they'd take such drastic steps never fully gels.  It can't.

The footage, although never gruesome, can be harrowing.  There's interrogation room footage as both girls confess to the police, both telling the same story, insane as it might be, like some sleepover ghost story that stayed with them in the light of day.  Like members of some two person cult, they share a common mythology they're working through.  The calm, occasionally prideful demeanor can be utterly unsettling.

The lives and families of the girls are examined (although not the victim, who everyone is grieving for, including the parents of the perpetrators) and while much explanation is given, and the parents don't deflect responsibility, but their honest bewilderment and guilt is understandable.  In another film, fingers might be pointed, and - as always when a young person commits a senseless crime - the desire to pin blame instead of assign factors that led to the situation - that would have occurred.  But here, we get factors introduced, but it's also clear everyone was doing their best as parents, but you can't know or anticipate everything.  And we have the word "unthinkable" for a reason.

And, at the end of the day, we're presented with evidence and a pattern that leads to reasons given, but they're so illogical, you have to feel ill knowing - this was just the exact wrong combination of elements.  Impressionable young girls, one of which was definitely suffering from mental illness while the other may be as well - if only a narcissistic disorder.  A made-by-and-for mythology for moody outsider kids.  Secrets only 12-year-olds can keep.

The film does not act as a defense for the girls, necessarily, but it does provide the sordid reality to the audience - of parents struggling with what their kids did - still wanting their children to be okay even as they have to acknowledge what they did and have to think what they missed, what they should or shouldn't have done.  The spectre of mental illness hangs like a cloud over one of the families, raising innumerable questions you can never answer.  Whatever happened - premeditated as it may have been - was not the cartoon of evil or stupidity we may have conjured up in our minds.  It's something far more difficult with which to grapple.

While the documentary does not look beyond the scope of this one tragedy, I'm reminded of the spark that set off the Salem Witch Trials and the murder that inspired the 90's-era Peter Jackson movie, Heavenly Creatures.  Young girls who seemed to share in a delusion that ended in death.  The French have a term for the notion that a delusion can pass between just two people - "Folie à deux" or "troi" and so on.  The American term is "shared psychotic disorder", and it occurs among people who are unusually close - often siblings.  But as Stephen King observed - "I never had any friends later on like the ones I had when I was 12 - Jesus, did you?"

Further, the film touches on how ideas percolate for us as we look at these screens as passive observers, building an identity that is not the identity that we share with the people we see when we look up from the screen, but it goes no further than looking at the screen-life of these kids, and what they were looking at that their parents didn't understand until it was all over (and how many of us read books, listened to music, shared in ideas we knew didn't need sharing with our parents?).

As I said, the film introduces the idea of myth-making and world-building online, but it never quite makes the leap to look beyond this case, how the larger idea extrapolates to our willing distortion of reality and perception of other people as shadow figures in our own narratives.

These true-life crime documentaries are often fascinating while frustrating, with an endless number of stones turned in pursuit of the truth (or a version of it).  This one feels less exploitative than many, but it also feels like a document prepared for the defense.

As with many docs, this one seems to struggle with filling the space communicating information and matching it to images.  There are so many shots of the forests of Wisconsin and angles previously unattainable in doc filmmaking, it's almost distracting.  As is some of the parade of Slenderman fan-fiction once the idea is solidified.

But all in all - it's as immediate a film like this as I've ever seen.

What I can say two things with almost near certainty:  (1) the doc will no doubt create a whole new batch of Slenderman devotees as kids seeking the dark and dangerous in the corners of the internet sprint to their devices to look up the character and the murderers and (2) the two perpetrators will be merged into that fiction as characters, likely martyrs or extensions of the character.  Hell, the movie ends with fan-fiction of the two girls palling around with the boogeyman.

Like a good conspiracy theory or unshakeable belief, the internet will feed it endlessly.
Posted by The League at 2/21/2017 12:27:00 AM

It a strange little doc. I thought the mental health angle and parent interviews were interesting, but in the end it kinda felt like the directors maybe just didn't get anything too interesting.

I know the doc made the festival rounds before HBO bought it. I"m not sure I saw what they did.

I get the appeal. The immediacy of the doc means the story is still very fresh - arguably too fresh as the legal process was far from complete. It's certainly not unusual anymore for a doc to have some sympathy for the accused, and I'm thinking of the "Paradise Lost" docs here. And it's certainly novel for anyone, adult or child, to have attempted murder in the name of a clearly fictional character.

But, yeah, it certainly seemed stretched in parts, or attempts to create mood didn't quite stick the landing. And it seemed like the producers could have pushed a bit more in some places instead of ending ideas in ellipses.

Yeah, maybe it's the lawyer in me, but the movie left me with a LOT of questions. I could have done with some more elaboration on the actual mental health issues, preferably with some solidly expert commentary, and less elaboration on The Slenderman by a bunch of self-styled experts on internet mythology and "mind viruses". From what I've been told at work, it's unusual to see the onset of schizophrenia in people as young as these girls (although early onset schizophrenia is definitely a real thing, it is rare), and it's also unusual for symptoms to primarily include visual hallucinations as opposed to auditory ones (although the delusions sounded par for the course). I would have also liked more detail about the experiences of Morgan's father with schizophrenia (had he been formally diagnosed? taken meds? when did he experience onset?) Also, Anissa seemed a little "off" in her own right. Had any potential diagnosis ever been proposed for her? I had basic questions about which of the psychiatrists shown in the courtroom were testifying for the defense, and which, if any, were testifying for the state. If the state had a psychiatrist who disagreed with the schizophrenia diagnosis, it would have been interesting to hear that opinion. Anyway, my complaints may delve into areas that maybe no one else cares about. But my experience is that the devil is in the details in these sorts of cases (hahahaha! pun intended!!!!).

I was very curious what you'd think of the diagnoses or suggestion thereof. I mean, I don't think you can necessarily say "oh, these girls are totally normal", but everything about this felt inconclusive, like it was just following an argument from the defense without really looking at things from more than one angle other than slowly revealing details to build the argument. I have less of a problem with the folklorists, but Slenderman is so *new* and so obviously fabricated, I don't know that any of them knew enough about what they were dealing with to say anything of depth. And if there was a psychologist or psychiatrist who had studied human/ computer interaction with adolescents, they didn't get much screentime.