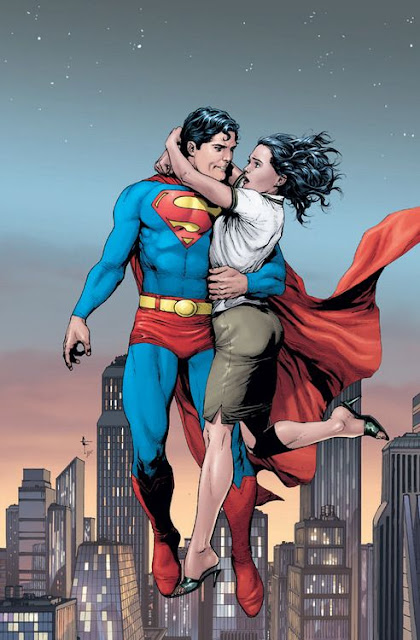 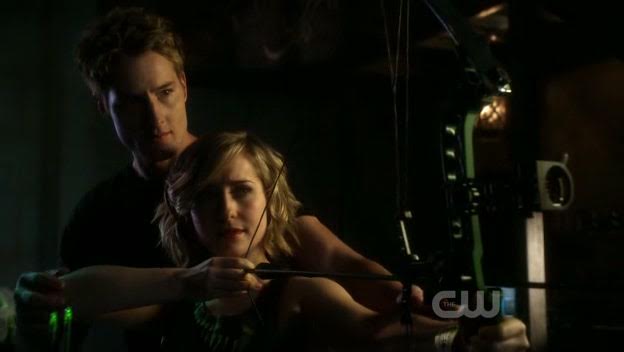 
I am bound to get endless crap from Ryan and maybe others for posting a scene from Smallville, but I'm going to do it anyway. It practically doesn't even qualify, being a show on the CW and two thirds soap opera already, but it is a show about Superman, so I figured that would get me a pass. The particular scene I'm referencing is the last scene from a latter-series episode in which characters Chloe Sullivan and Oliver Queen (Allison Mack and Justin Hartley) begin their romantic relationship.

Some backstory. It's no secret in this house that Chloe is one of my favorite DC characters. It is true, she was an original creation for the tv show, but DC did purchase the rights to her character and she has shown up in a couple of comics. She was a strong enough character to hold my interest without a decent romantic storyline for the majority of the series and that was one of the things I loved about her. But ultimately, you want your favorite characters to be happy and until this episode and this scene, Chloe just wasn't winning in love. She spent the first half of the series in unrequited love with Clark and the next few years stuck in an on-again off-again chemistry-free relationship with Jimmy Olsen that made both characters look bad.

Oliver Queen/ Green Arrow had been on the show for a number of years at this point. He brought a breath of fresh air to the series, and while he suffered the same writing inconsistencies as the other characters on Smallville, his character progressed the Justice League plot and was generally fun, especially compared to the increasingly wooden Clark, played by Tom Welling. I had felt since his arrival that Justin had fantastic chemistry with Allison, but never expected the writers to do anything with that potential.

Then came this scene, dropped at the end of an episode in which Chloe had endured yet another failed attempt at romance. She returns to the Watchtower, weary of the horrible year she's had (you have horrible years on these shows) and finds Oliver there to lend a sympathetic ear, some of his scotch, and an archery lesson. It was the moment when both characters opened their eyes to the possibility of what they could have with each other. Not only was this new direction a welcome surprise, it was executed beautifully and subtly by both the actors and director (coincidentally Allison Mack herself). Here was a show whose idea of romance for a good chunk of the series was ending every other episode by having Clark and Lana making sad cow eyes at each other in the barn loft. It was a scene that made me sit up and pay attention for being wholly unexpected and mature. Smallville had a bad habit of telling and not showing, especially when it came to romance, but it was what wasn't said out loud in this scene that really stuck with me and made me buy into the relationship. These two had been friends for years, had worked together building the baby Justice League, knew each other's darkest secrets. What this scene highlights to me is their comfort level with each other. For a show that ran the "secrets and lies and hidden identities" plots into the ground, it was refreshingly honest and incredibly sensual.


Y'all, if nearly 17 years of marriage has taught me anything - I'm absolutely not making fun of Jamie for any of this.  And I'll try to learn from it a bit.

Stuart showed up all you fools with just a crazy number of entries.

Since you took Superman out of the running, I'd have to go with Guillermo del Toro's first Hellboy movie.

In the scene, Liz (Selma Blair) is in some sort of near-death state, Rasputin having removed her soul to motivate Hellboy to help with some cosmically bad prophecy. Rasputin subsequently transforms into a giant Lovecraftian hellbeast, which Hellboy eventually destroys.

Yay, the good guys won! Down side: Rasputin is no longer around to revive Liz.

Hellboy solemnly attends to Liz's unconscious body, and whispers something in her ear. A few seconds pass. She draws a breath and wakes up! The two embrace, and have the following exchange:

Liz: "In the dark I heard your voice, what did you say?"
Hellboy: "I said, 'Hey, you, on the other side - let her go. Because for her I will cross over. And then you'll be sorry."

Now, call me old fashioned. But that's about as goddamn romantic as it gets.

I mentioned this question to my wife, and she reminded me that she copied her wedding vows from Conan: the Barbarian (1982)

"All the gods, they cannot sever us. If I were dead and you were still fighting for life, I'd come back from the darkness. Back from the pit of hell to fight at your side."

That movie also has one of my favorite bromance quotes, from Subotai:

True story: I once convinced my grandmother to rent the VHS of Black Rain, an R-rated Ridley Scott action film, based on a picture on the back of the box showing Michael Douglas and Kate Capshaw looking vaguely starry eyed at one another.

There is absolutely nothing romantic about it, but it is super violent. Like, you get to see dudes get beheaded. My grandmother was a very sweet lady, and sat through the whole thing anyway. I still feel a little guilty about that.

Good flick, though. I recommend it.

I always loved the scenes between Craig T. Nelson and JoBeth Williams in Poltergeist. Not romantic in the obvious sense, but they had great chemistry as a middle class couple with kids. As a child of (multiple) divorce(s), I remember thinking "this seems like how it's supposed to work."

I guess it's like the romance of everyday mundane married life, when a relation feels real and lived in, and you can tell they love one other, even when they're not making grand gestures about it.

(editor's note:  I think all of us who've been married a while know that - indeed, it does)

The end of The Last Starfighter, when Alex comes back to the trailer park for Maggie. She doesn't want to go for the same reasons she didn't want to follow him to college, because it means leaving her whole life and family behind. So as grand as the gesture may be for him to land a spaceship in the middle of the trailer park, she still says no.

As Alex ascends the elevator to the cockpit, preparing to disappear forever to a life of adventure, Maggie looks at her grandmother as if to apologize for wanting to go and nervously ask permission. Her grandmother smiles and says, "Just... send me a postcard. Or whatever they have up there."

Maggie runs back to the ship As the music crescendoes. Maggie and Alex embrace. The crowd of trailer park residents cheer, and they prepare to leave.

And I cry. Every time, since I was about eight years old. 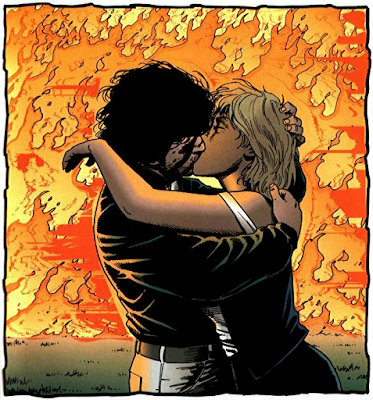 I don't know that it's any particular scene, and it's steeped in 1990's-ness, but I tend to find the romance of Jesse Custer and Tulip O'Hare in Garth Ennis and Steve Dillon's Preacher to be one for the ages.  Whether that romance gels on screen in quite the same in the TV show, I can't be certain.  But any couple who pledge Until The End of the World in the middle of all that?

In a very weird way, Preacher gave me a romantic ideal that didn't need to end in tragedy, that could include making mistakes, gratuitous sex because you just continue liking each other that darn much, and pain of separation.  And trying to constantly have each other's back when all the forces of the world and the Cosmos itself is turned against you. 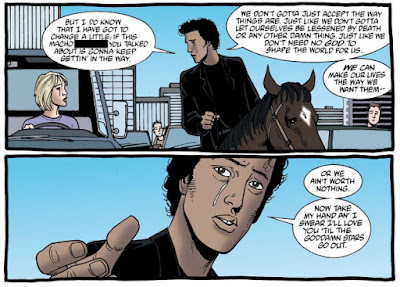 People, that's the kind of romance I can get behind. 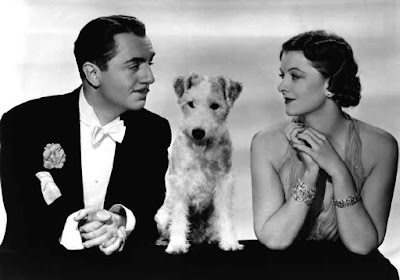 Of course the greatest romance in detective genre fiction, either in film or in the book, is Nick and Nora Charles of The Thin Man.  Yeah, I'll even put it before Bogart and Bacall movie romances!  Watch me!  I just did it!

If you've never seen the movie - for shame.  Correct that situation.

And, of course, seeing how the Charles' interact upon the arrival of Nora into the first film (and it never really lets up from there) - presents a romance in high gear.

Sure, there's some sexist stuff in this 1930's-era movie, and no doubt a remake wouldn't sideline Nora as much once the gumshoe'ing got underway, but a couple that's intent on keeping each other entertained, keeping up with one another and isn't afraid to have fun - that's romantic, right?

Wow. I can't believe I missed out on that Conan the Barbarian quote. It's the third best movie of all time. I mean, did write two jokes about that one scene alone.

I did struggle to think of a good romance scene in Slacker, but there really isn't one. Probably the best one is with the old man with the tape recorder, but that's more about regret.

Yeah, I don't think Linklater was quite there yet with the romance, and then made three damn movies about Ethan Hawke not sealing the deal.