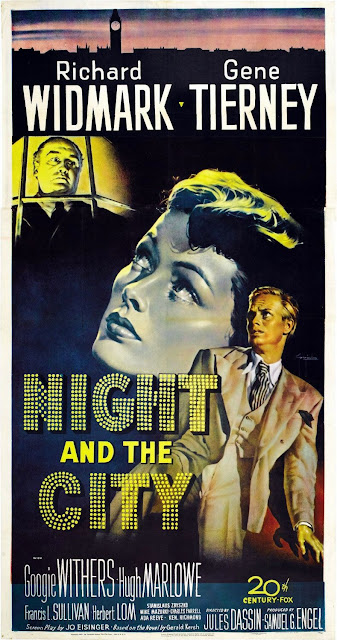 At this age, it's not often you wrap up a movie and are pretty sure you've just seen one of the best movies of its genre.  But there you have it.

You guys will routinely see me push back against the notion that "noir" means cops and detectives, or even femme fatales.  And I love detectives and femme fatales (I need to watch some Marie Windsor, stat).  Instead, it's usually about looking at people who follow their worst instinct and their lives unravel.

Night and the City (1950), stars Richard Widmark as a three-time loser American living in post WWII London.  A hustler, Harry Fabian (Widmark) works for a club that fleeces unsuspecting gentlemen looking for company by drawing in American tourists - but he's always looking for the next big deal, but always without he cash he needs to make it happen.  Living as a part of the London underworld and nightlife, Fabian's wanderings and connections introduce us to a wide assortment of misfits, undesirables and racketeers.

He has a long-suffering cabaret-singer girlfriend (the always great Gene Tierney) who will bail him out with cash and who sincerely loves him, and while he reciprocates, he can't help but exploit her kindness.  At work, his boss is a Sydney Greenstreet-type who doesn't think much of him and is married to a former paramour of Fabians - Helen (Googie Withers) - who is making moves to get out and start her own club.  During a shake-down at a wrestling arena, Fabian comes across a former great of the Greco-Roman wrestling world, in town to see his son's schticky pre-WWE-style show.  Fabian pairs with the great old wrestler and makes a move to corner the wrestling market in London - if only he can get the money...

There's a hint of Three Penny Opera to Night and the City.  Everything takes places in dank nightclubs, occurs in an underworld of night-dwellers who've never stood a chance.  How Harry got there and what his story is - never really discussed, but it can't be a happy tale.  It's a winding tale with a *lot* of characters, moving parts, and twists and turns.  There's no veneer of suburban normalcy for any of these characters to return to, or for a sense of safety.  While Harry's story is what pushes the characters into action, honestly, you feel the clock is ticking for everyone.

For years I'd heard about Night and the City, but somehow I just never got around to it.    Turns out the movie is directed by Jules Dassin, who also handled the phenomenal Rififi, so I may have a new favorite director, I suppose.  I'll be checking out The Naked City ASAP (it's on the DVR), as that's the movie that landed Dassin this job.

The movie is beautifully shot, using the damaged and scarred London, as well as the decaying back alleys and dark corners of the East End.  Sure, you'll see Trafalger Square and landmarks pop up here and there. But if San Francisco, LA and NYC make for ideal Noir backdrops, I've now learned London ain't half bad, either.

The casting goes for character over gorgeousness (with the exception of Tierney and Withers).  When Richard Widmark is the handsome devil of the film - you're going for something in particular.  Dassin has no interest in sexing up his underworld, no notion of making any of this look appealing.  And while he is - arguably - sympathetic to everyone, the faces are those of people with wear of years and experience.

A score by the always on-point Franz Waxman drives home the tension of Fabian's plight and downfall.

Look, a lot of noir films fail to stick the landing.  You get a Double Indemnity or Postman Always Rings Twice some of the time, but you also get happy couples riding off into the sunset in even good movies (Dark Passage).  As Muller said in the closing remarks - this is maybe the most noir ending imaginable, and it packs a punch.  Not too many movies end with the desperate character giving up their life so that the long-suffering girlfriend will get a payday and he can finally make good.

It's a strangely redemptive, and beautifully imagined ending, and I tip my hat.

I'm sorry it took me so long to watch the film, but I am looking forward to watching it again very, very soon and learning more about Dassin.
Posted by The League at 2/16/2018 09:29:00 PM