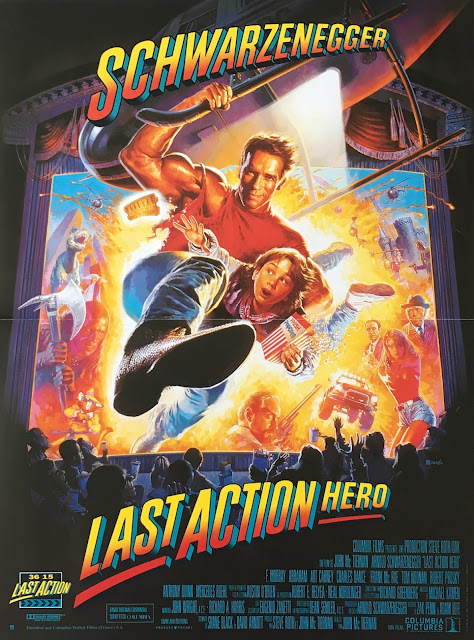 I didn't see The Last Action Hero (1993) immediately upon release in the weeks after I graduated from high school.  It arrived with a lot of bad reviews, and I wasn't particularly in a rush to take in a movie that was advertised as Arnie and his wacky kid friend and their magical adventures (see poster above).  Eventually it did get some word-of-mouth conversation going that maybe the movie was better than the reviews were saying, and, frankly, I used to go see just about everything, anyway (it used to be cheap to see movies), so off we went.

That next year some trusted friends (hi, JAL) said they liked it, and I wrote it off as "well, we aren't going to agree on everything."  That drumbeat has remained fairly consistent over the years, so I'd intended to go back and watch it when the opportunity arose.  That point came in the form of my pal SimonUK getting us tickets (in the balcony, no less) at the Ritz on Monday.

Once underway, my memories of the movie turned out to be extraordinarily dim, but I'm not entirely surprised.  In 1993 I was 18, and didn't find the movie exactly funny, and it felt messy - like something hadn't quite gelled.  And while the movie made light of then relatively current cinema tropes and whatnot, even when it worked, I didn't really care.  Part of it - and I remember telling my brother as we drove home - was that the movie still relied on the tropes to such a degree - I knew I was missing some of what the movie served up as I found myself just watching it like a routine, if lesser, Arnie movie from maybe four years prior, but which would occasionally pause to wink at the audience.

One of the things that's also true - Terminator 2 arrived in 1991, and - paired with the Aliens movies, was already changing action movies.  Big sci-fi spectacles were now on their way to dominating Blockbuster/ Tent-Pole status, and with the Matrix coming just six years after this film (I know!), we no longer seemed to rely on the he-men of the 1980's as the main feature.

By 1993, movies about LA-based cops with a messy homelife taking out drug dealers with large guns and a firm disrespect for departmental policy were evaporating.  To my 1993 perspective, it felt a bit passe, or like your parents trying to spoof hip slang you used two grades ago and it was now totally embarrassing.

Arnie, always the businessman, seemed to learn a different lesson as he was paired with Edward Furlong in T2, and that possibly stemmed from the success of Kindergarten Cop and Twins where he was profitably comedic, and his own marriage/ the arrival of children beginning in the late 80's (that's speculation.  Arnie hasn't told me anything.).  He was getting hep to kids movies and his appeal to children and parents.  So if he wanted to pair up with a wise-acre teen in an action-comedy, who could blame him?

But with 25 years between, the movie plays shockingly well.  Apparently it suffered some very strange studio-related issues, and rejiggering after test audiences apparently gave it scathing marks and whatever happened there left some scars on the movie.  Still, the jokes the movie makes - which come hard and fast and without comment for the most part - may actually play better in 2018 than they did then.  And, the film has the benefit of everyone involved actually living in the moment being spoofed, so you don't get that slightly off-kilter take on things that can kill the joke when the joke is "Ha, the 80's!", as in Kung Fury (sorry, man.  That thing feels like a mildly amusing 30 second YouTube video that will not stop).

I don't know exactly how many movies featured cops in LA back in the 1980's and early 90's, but certainly enough that all of us could imitate a police chief chewing out a loose cannon of a cop.  Stuff like that turns up, but so does a lot of other stuff, from soundtrack cues to lighting, to vehicle selection, driving, the insane and unstated bodycount, gratuitous use of models, unlikely partner team ups... it's all there.  Even the Cousin Olivering of a series as Jack Slater's daughter shows up to give the young male audience something to ogle.  And while most of it isn't gut-bustingly hilarious, the consistency of winkiness is admirable (I am embarrassed that the thing that got my biggest laugh was a fart joke).

I'm not sure folks who didn't grow up on Arnie or who weren't there at the time will fully appreciate the film, but as a package of early-90's-ness, it's at least *interesting*.  And the separation in time really does make the film pop a whole lot more for those of us over 40 (I noticed the "why are there only models in the background?" bit before its mentioned.  I mean, I think that was Angie Everhart working in a Blockbuster Video.).

I'd be very curious to know what the original script for the movie looked like, because the tone of the film swings wildly - sometimes a goofy 90's buddy cop comedy with magical overtones, sometimes a deadly serious thriller, sometimes a melodrama.  But, more than that, beyond commenting on the tropes of movies like Lethal Weapon, the film seems to want to say something, and say something a bit hard to hear.  And I kind of feel like whatever that was, the movie wound up covering it up with a happy ending for everyone, leaving the film's denouement a bit hollow.

What's crazy is the talent lined up.  Directed by John McTiernan, the movie also features some amazing actors in addition to Arnie.  Charles Dance.  Aidan Quinn.  Tom F'ing Noonan!*  Mercedes Ruehl, one of the best acting products to appear in that era, is relegated to a concerned mom role - and she's amazing.  Art Carney shows up in his final role before retiring.

The movie does give Arnie this really interesting thing to do where he's playing "Jack Slater", a living, breathing character that our POV character - the kid Danny - knows is played by Arnie.  When magic happens and Danny enters the latest Slater installment, he engages with our kid, and then emerges into the real world, still Jack Slater, where he meets Arnold Schwarzenegger at the premier of the new movie.  And movie Arnie isn't exactly an asshole, but it's not overly flattering (and Maria Shriver seems pretty put out with him).

I won't go so far as to say Arnie is a great actor: he is not.  But he's hit his stride here, and it's just before he wound up sleep walking his way through stuff like The 6th Day and Eraser** as he scrambled to stay relevant or marketable in subpar material.

There are tons of cameos.  So many cameos.  MC Hammer.  Karen Duffy.  And a pre-American-fame Ian McKellan as Death from The Seventh Seal.  Tina Turner.  Sharon Stone.  Robert Patrick.

And, of course, the movie has very little kind to say about our own world.  I'd argue this is where it's stretching, trying to make a point of some kind, and it never quite works out.  All we learn is that our villain - escaped into the real world - realizes that in our world, no one cares if there are murders in the street.  No Jack Slaters will come wheeling around the corner with guns blazing.  I mean, it's easy to forget what a cynical time the 80's and 90's really were, but we laughed a lot at some pretty grim stuff, lest we cry, I guess.

But the movie is a product of Zak Penn on story and Shane Black on script, so you can feel them trying to wedge in that depth - one would argue Danny is replacing his dad with Jack Slater both in the real world and when he meets Jack Slater in the movie - but that goes nowhere.  There's something to say about on-screen versus off-screen violence, and that plays out, instead, as a "beat the clock to return to Oz" trope.

Still - for a movie that took a critical and commercial beating at the time, it's curiously worth a revisit.  It's nowhere near as bad as was regarded at the time by reviewers or 18-year-old me.  And it had some ideas in it worth exploring.  Frankly, the idea of how we relate to movies and what they do and do not reflect about the real world, or even how hollow those characters are just beneath the surface, is an evergreen concept.  And I can imagine some version that clashes the focus-grouped, PG-13 tentpole films of today versus the modern landscape, and, hey, actual physics.

*has Tom Noonan ever actually not been great in something?  I think if he tried to be bad at acting, he'd wind up being so good at being bad, the universe would collapse in on itself

This movie has aged exceptionally well. It feels ahead of its time (in that occurred before “meta” was a thing) and a throwback all at once. I love the reverent portrayal of the rundown old movie palace, the clear lines the movie draws between the showmanship of old-fashioned stage magic and big-budget Hollywood escapism, and the unironic adoration that shines through for the experience of going to the movies – even while cynically lampooning them.

Yeah, I wonder if the desire to push the envelope and go totally PoMo on his own career was just something Arnie wasn't quite ready for. And given the star system of the 90's, I assume he had some pull in how everything went. It's hard to say. But, yeah, it absolutely just feels like something that would have gotten the greenlight in 2004, not a decade earlier. But would have been a straight up silly movie then, more of a spoof. Using Arnie himself is kind of insane.

Sometime I'll take a picture of the "Houdini Hole" in the ceiling at our grand old theater in Austin. They've never repaired this one spot in this 1900-era ceiling because its supposedly where Houdini had to knock a hole in the ceiling to suspend himself for one of his stunts. As in all things Houdini, no one knows if the story is accurate or apocryphal.

Watching this, it made me really wonder why Charles Dance is such an underutilized feature for American film. I mean, he shows up a lot as "that guy", but he should have been in *everything* from 1990 - 2005, at least.