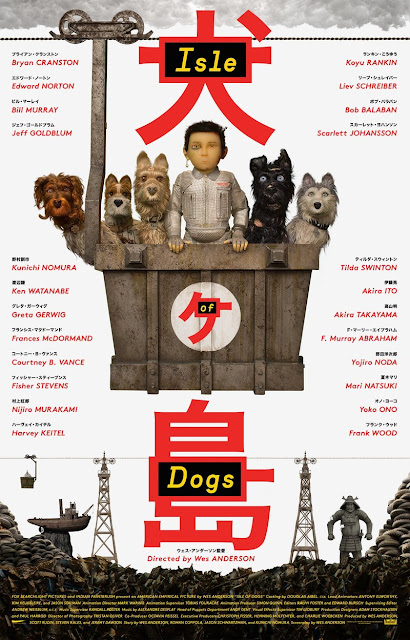 I had to tell my dad this movie was not for kids, but I kind of want to take that back.  Take your kids to see Isle of Dogs (2018).  Maybe not the very little ones, but for the kids hitting late elementary, maybe middle school?  They should see this movie.

I won't be the first person to point out that director Wes Anderson's track record with dogs is not great.  I can think of two dogs as characters in two prior Wes Anderson films, and they've met with unusual and very final fates.  This gave me trepidation going into the movie, as it is, after all, a Wes Anderson movie and his thing for dead dogs, and because man's inhumanity to dogs and cats sets me on edge.

It's impossible I'd also be the first person to note that animation is a phenomenal place for Anderson to work - his eye for detail and control of every shot in his films, his bespoke, handspun worlds are managed here to every detail, every facial movement, every line on every scrap of tiny paper, every cloud in the sky, every blade of grass.  If you're thinking of waiting to see it on television - don't.  As much as I go out of my way to see Marvel movies on the big screen so I can bask in the comic book worlds and the hundreds of millions of dollars spent on green screened fantasy environments, here you're going to want to see every set, every puppet, blown up and larger than life.  I loved The Fantastic Mr. Fox, but this movie felt like a whole new level.

The plot:  in the future, a dog-hating clan has taken control of official, unofficial and illegal forms of management of the city.  Their gameplan is to remove all dogs from the prefecture once a dog-flu is introduced to the city.  Rather than put all the dogs down, they're sent across the water to Trash Island.  Six months after he was first to see his dog shipped off, the nephew of the Mayor steals a plane and flies to the island to find his loyal dog, Spots.  He is found by a crew of dogs voiced by Bryan Cranston, Edward Norton, Bob Balaban, Bill Murray and Jeff Goldblum.

There is a lot going on both in the city and with the dogs.  It's a sort of sprawling political thriller/ analog for real stuff/ meditation on canine loyalty and companionship and how we abuse that trust and bond.  While the dogs are voiced by these familiar actors and have Anderson-ian characterization and complexities to their relationships and issues, they're still dogs - and you couldn't ask for a better juxtaposition.  What *is* your dog thinking in Jeff Goldblum's voice?

I've seen some pushback in regards to an American Anglo production attempting to set a film in Japan with the human characters speaking mostly in Japanese.  I am not Japanese or Japanese American, and I'm not going to go out and tell anyone how to feel. The gist of the arguments can be found here.  I will say this:  no movie comes out that is not without it's consequences when the people depicted are not of the same ethnic or geographic origin as the filmmakers.  As uncomfortable as we are with issues of White Washing that Hollywood does with Asian properties and characters (that doesn't take place here - this is an original story), I'm just as uncomfortable with the notion that filmmakers need to stay in a lane, ethnically and geographically.  No movie is made in a vacuum, and no nation has mastered depictions of other cultures. But I also find the "they're dehumanizing the humans because only dogs speak English" to be the perfect twitter-storm fodder for the current state of film discourse.

Visually - this is all Wes Anderson.  Lots of stagey blocking, lots of background detail in a worn and well-loved world, a set color palette.  The puppets, both dog and human, are brilliantly animated, and Anderson knows exactly when and how to break from naturalism to cartoon realism with maximum effect - just a next level extrapolation of his live-action films, really.  The film manages to meld translation directly into the framework in well-laced subtitles, and via translators electronic and human.  I am not overly familiar with Japanese artistic stylings, but someone on the film was - there's beautiful pre-20th Century art inspired animation, design of sets and backgrounds.

No surprise that the plot itself is a bit of a Rube Goldberg, genuinely leaving the viewer unsure of where any of this is headed.  Two or three threads are occurring in the city why between one and three storylines are converging on Trash Island.  Throw in some well-timed flashbacks, and it's an interesting work of clockwork plot machinery - but one that hinges on the buyable genuine human emotions of a boy and his dog(s).

Musical selections are standard Wes Anderson canon, as is the score: and that's not a complaint.

Really - while I am not saying this is a perfect movie, like a well made meal at a well run restaurant, what is there to complain about?  If anything, despite the very different actors voicing the dogs, without their physicality to give weight to the roles, I am not sure that, aside from Chief and Spots, the dogs wound up with enough variety of character.  Well, of course there was Nutmeg the showdog, the epitome of Wes Anderson characterization - just in puppet form.  And we shouldn't ignore the excellent characterization of the children - who Anderson always has the most faith in, anyway.