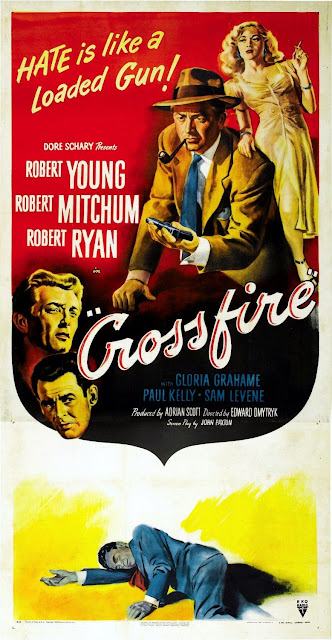 The relevance of a movie like Crossfire (1947) will never really disappear (recent headlines have not given me hope we're on the verge of a Star Trek-like utopian future), and the film continues to feel as immediate now as it did in 1947 when it was nominated in several categories for Academy Awards, including Best Picture, Screenplay, Actor, Supporting Actress and Directing.  Kind of odd for a noir, which may have their cult following, but were nowhere near The Academy's radar with most of the pictures.

Taking place over the course of about a day, the film follows the discovery of a dead Washington DC local played by Sam Levene.  It seems he met some soldiers in a bar, details get hazy from there, but he was found dead after they returned with him to his apartment.  Who killed him and why isn't necessarily a mystery at the center of the story as the film reveals early on it was Robert Ryan playing a racist SOB who, in a drunken fit, decides to kill Levene's character as he won't let any Jew tell him what to do.

While soldier  Robert Mitchum tries to sort out what really happened with the young soldier Robert Ryan is pinning it all on, Robert Young plays the DC flatfoot trying to make sense of the evening and get through the soldiers' tendency to try to work things out between themselves, obfuscating the truth.

Gloria Grahame would earn her Oscar here as best supporting actress playing a taxi-dancer (read: hooker) with a heart of gold.  It's not my favorite Grahame performance - that's in The Big Heat - but she does get a chance to play someone with nuance and a sort of casualty of the war herself, having married a guy heading off to war and realizing she didn't want him after he left and now he won't leave her alone.

While the specific scenario of soldiers returning stateside and facing the lives ahead of them with a mix of feelings is something we think of differently in 2018 - that's just the catalyst for the real issue of the movie (and it is an "issue" movie).  It's not necessarily just Anti-Semitism the film is addressing, but the deep-seeded rot of bigotry itself, manifesting in one and then two horrible crimes.  There's a deftness to how the film recognizes that this sort of hate is hard to uncover or recognize, that it's not a mad-dog, frothing at the mouth strain of criminality - that in the light, they'll behave themselves and weasel their way into seeming like good-guys.

You're not supposed to say "the movie was beautifully shot" anymore.  That's a new film-commentary rule - so the specific call out I'd make is that this movie, which takes place at night, is saturated in noir darkness, with sharp, angular shadow in play. dramatic camera placement and lighting, and good decisions all around thanks to DP J. Roy Hunt.  The film was directed by Robert Dmytryk - who would get caught up in HUAC proceedings - and I can vent about HUAC and what was seen as "commie propaganda" some other day, but if this sort of content is what they were sniffing out, the wrong people were being called Un-American.

Anyhow, while not exactly a textbook entry in the noir canon, noir fans always claim it, and I can understand why.  And if you're ever thinking about trying some noir, this is a great place to see the range of the form and see a heck of a movie to boot.