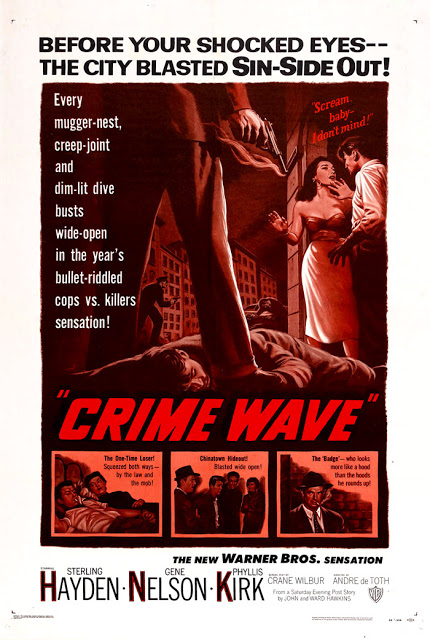 Sometimes casting can save the day for a fairly standard plot in a movie - it can be a real pleasure to see your favorite actors, character or otherwise, play out the parts in your boilerplate movie.  Other times that same old jazz standard gets a new look, a new interpretations and the execution is enough to make you stand up and applaud.


Crime Wave (1953) combines both of these factors, making for a positively watchable noir picture, a fast-paced thriller that looks and feels like something different while making the best use of what actors have in their personal toolkit.  The plot is nothing to write home about, a riff on the standard hostage-situation noir picture.  But throw in Sterling Hayden (literally one of my favorite actors), Ted de Corsia, a young and undiscovered Charles Bronson - still billed as Charles Buchinsky, and a minor part for madman Timothy Carey and you've already got something.  Now pile on a movie that's pushing the boundaries of mise-en-scene in a 1953 crime picture via some bold creative decisions of camera, sound and lighting...  and there are far worse ways to spend your 70-odd minutes.

A guy (Gene Nelson) who was a driver for heists who did a few years in San Quentin, been out two, got a good job as an airplane mechanic, got a pretty wife who knows his past and accepts him (Phyllis Kirk).  Now some old acquaintances from The Life are busted out and robbing small-potatoes shops to make ends meet when their driver takes some cop lead and heads to where he think he'll be safe, the happy home of our ex-convict.

This draws the attention of the cops, and especially a detective (Sterling Hayden) who thinks the ex-con is in on it .  Now the crooks want the ex-con in on their planned big job, and they've now got the pretty wife as a hostage.

All pretty simple stuff, but - dang if it doesn't work.

I do want to give the movie some credit for how the film builds tension - because it's pure noir.  It's in the smart angles, not giving the audience so much as a second to consider an avenue to outsmart the characters/ screenwriters to think of how this guy could get out of his situation - they've blocked every exit.  If the crooks don't just put a bullet in him and his wife, the cops will ignore his claims to innocence and send him up the river.  There's no good answer - only moving forward, looking at every corner for a chance to escape and a chance to make it right with the law, all while things are going from bad to worse.

It's hard not to note that Hayden's presence in any movie is partially defined by his sheer size (Hayden stood an impressive 6'5" - gigantic by Hollywood standards then and now) and here he looms over the other actors.  According to Muller's intro, director Andre de Toth ensured the sets were cramped and ceilings less than vaulted.  But there's also angles that really throw the man into perspective, literally and figuratively.


It's easy to cast Hayden's cop as the by-the-book thug who's final act of largess feels more like capriciousness than justice - and maybe that's a fair reading.  But the movie suggests otherwise to this viewer, with Hayden's cop feeling gratitude and his actions in the final reel driven by his hope to wrap this up while maintaining an understanding of the ex-con's situation.

Credit, again, to de Toth and DP Bert Glennon for their "You Are There!" approach to key scenes, building tension.  I love the shot of Bronson escaping the veterinarian's office, and I don't even really know how they filmed it keeping everything in focus - and that's not to mention the scene of Hayden walking around the station as the audio tracks to each different desk.  Not to mention about seven other scenes (that hand stopping the other from lifting the phone!).

Casting is a tricky business - and I am afraid I don't know who the casting director was on this movie, but Muller called it right.  Ted de Corsia should just be in everything aimed at adults from 1948 - 1965.  For pure menace, Tim Carey.  A young Dub Taylor actually exists in this movie.  And Hank Worden showing up for a bit scene (as always, playing Hank Worden).  And we will not let the casting of Charles Bronson go unmentioned.  Holy smokes he was good right out of the gate.

If Crime Wave comes on (or under it's other name, The City is Dark) - give it a shot.