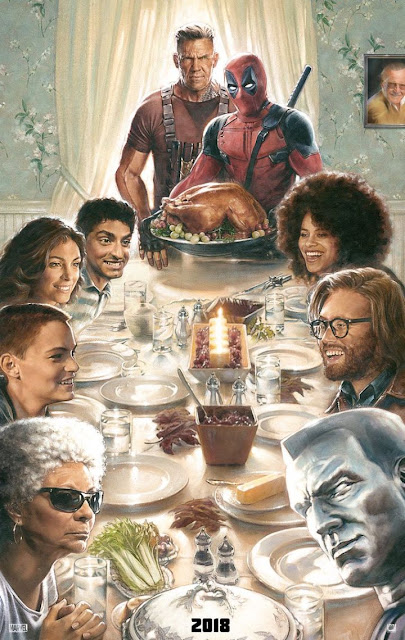 
By now I expect the people who wanted to make Deadpool 2 (2018) a priority have seen it.  Probably opening weekend.  I was at Noir City Austin opening weekend and Solo this last weekend, and as my travel schedule is about to be goofy the next two weeks, I figured I'd get this one in before it was shuffled out to make way for the rest of summer's barrage of offerings.

Really, the movie is the opposite of critic-proof.  Yet, like the first installment, the movie is surprisingly well-got by the general critics with a really solid 83% rating on Rotten Tomatoes as of this writing.   Maybe less surprising is that the wannabe-Pauline Kael crowd of Top Critics at RT are clocking at 67%.  (I mean, that's just funny).

I'd seen more than a few takes on social media that, really, even as you read them, you sort of wondered "now, after the first one, why did you go to this movie?" or, of the "wow, how deep planted IS the stick up your butt?" variety.  But, yeah, the movie doesn't have pacing issues or anything like that.  It probably does have some story issues, which seems like a weird quibble with a movie about a guy who breaks the fourth wall and can take an arrow through the skull.  The fact it even *tries* at a story and kinda wiffs it says almost more about our current, increasingly rigid standards for how a story should be told.  If anything, really, the movie needed to do more to develop the supporting cast, but if you've seen the movie - you know they really don't even get around to assembling the supporting cast until shockingly late in the movie (sort of how Deadpool 1 seemed to take a weirdly long time to just getting Deadpool to superhuman state).

But I also don't really think anyone is going to Deadpool movies for the intricate plotting or emotional beats (of which this movie actually has a couple, which sorta shocked me).  That's not just give the movie a pass, but it's kind of weird to go after an action-comedy that's heavy on the comedy and pretend it's trying to be something else.  At some point, not every movie is going to be all things to all people.  Not every character is going to be exactly what everyone wants.  And occasionally we're going to have a major plotpoint as the catalyst that, even when it works just fine and has emotional payoff, feels kinda weirdly dated.

That aforementioned comedy arrives in the form of a brand of humor that still plays for me, but I know I would have been wheezing walking out of that movie in my teen's and 20's.  A lot of the jokes are the kind HR frowns on in the workplace, and - truthfully - a lot of it is the sort of stuff that anyone but a manic goofball hiding behind a red mask couldn't really pull off outside of a stand-up special where it feels the rules aren't quite there.  A lot of people aren't going to find this brand of humor to their taste - and I am glad there are movies out there since their inner 14 year-old has apparently died.

I actually knew who most of the characters were in this Deadpool movie - including our pivotal character of Russell Collins (that's Rusty from old school 1980's X-Factor!).  The movie plucks from the era that sort of ushered me out of the X-books as I wasn't much of a Liefeld fan.  Domino is played by Zazie Beetz, and there are many reasons you'll hear folks asking to see more of the character (and Beetz).  The omnipresent Josh Brolin is dead-on as Cable (one of the most head-ache inducing characters in the Marvel pantheon, simplified and streamlined here).  But we also get back Colossus and Negasonic Etc... Etc...   Not to spoil anything, but if you're going to put Shatterstar into a movie, this was exactly how I would have wanted to see the character presented.

In a curious way, the movie is less "stop the bad-guy" and more of a man vs. himself paradigm for conflict.  Can Deadpool find the meaning of family? was not the expected arc.  But it doesn't mean I didn't mind seeing a stand-in for gay conversion camps go up in flames by the film's end.