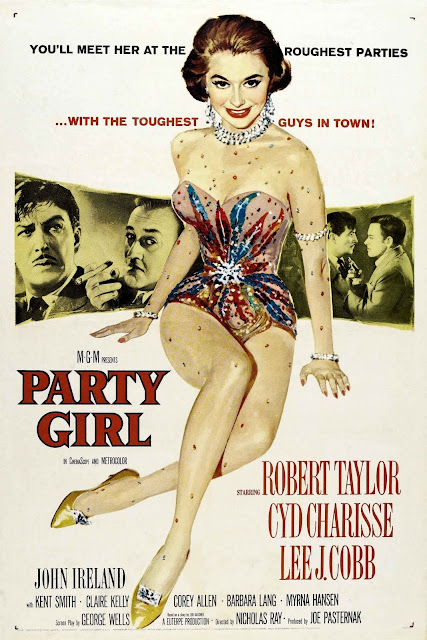 Don't get thrown off by the title Party Girl (1958).  I had expected a film about a woman learning that the party life was not for her and that, after some misadventures, she'd wind up in the arms of a waiting Robert Taylor - who had seemed so stuffy at first.  Instead, I got a 1920's Chicago mob drama with oddly inserted dance sequences (this is why we hire Cyd Charisse, after all), where a mob attorney finds love with a dancehall girl and both decide to try to go straight despite the odds and the gravity of standing so close to an organized crime outfit.

In short - I suspect they didn't know how to sell the movie (which is bonkers), threw Charisse on the poster, said "lookit them gams, fellers!", and hoped for the best.

Directed by Nicholas Ray*, it's also more artful than I expected - certainly more intricate and with better performances out of most of the cast than a phoned in B programmer that many a noir film is, indeed.  Robert Taylor's turn as a mob attorney who wants out - with neither a mob boss who is interested in letting him go and law enforcement who aren't afraid to put the squeeze on him despite threats to both himself and Charisse - it's an interesting evolution of a character across the movie.  Smartly written, and well portrayed as a debonair but crippled guy who has rationalized a lot along the way, and finally finds his match in Charisse's chorus girl.

Charisse herself is able to play a bit older and wiser - still in top shape here in her mid-30's, but not to be mistaken as a babbling newcomer to the scene.  She's not fallen into the traps many of her colleagues have, weightier stuff than most of what backstage comedies and musicals suggest - there's an early scene where her roommate, seemingly just in a silly dither about a guy not calling her back winds up taking her own life when you learn she was pregnant.  Charisse is famed far less for her acting (which is always good, but she wasn't threatening Bette Davis) and far more for her dancing, which was some of the best Hollywood ever saw.  You likely know her from the Broadway Melody portion of Singin' In the Rain where she has no spoken lines.

When Taylor wants out, though, he now has someone who could be used against him.  Rico (Lee J Cobb in top form) threatens to throw acid on that angel face.

This is the first noir film shot in color to appear on Noir Alley.  It's an odd mix of gangster film and stops to let Charisse knock two separate modern-dance numbers out of the park - but I'd certainly be able to make an argument for the film as mix of noir and gangster movie as even the best of intentions don't mean a woman isn't dragging someone into a situation out of their control.

While the Nicholas Ray pedigree and Robert Taylor starring gave the film a weight I hadn't expected when I pressed play to see what TCM had programmed, it's also simply a better scripted movie than I was expecting.  When people think of films from the 1950's, I think sometimes what they're thinking of are half-glimpsed things on TV and maybe 1950's era sitcoms and assume they didn't get dark.  Well, this is Nicholas Ray - so, yeah, aside from the aforementioned suicide and threats of disfigurement, there's a straight up near-rape, gunning down of mobsters on camera, politicians leaving innocents to dangle to further their ambitions...  it's not exactly Green Acres.

And, on a final note, I will never complain about Charisse appearing in anything.


*if you aren't up on your Nicholas Ray, definitely worth checking out movies he directed.  A quick rundown of the ones I've seen makes for a list of deeply memorable films.
Posted by The League at 7/23/2018 01:12:00 PM