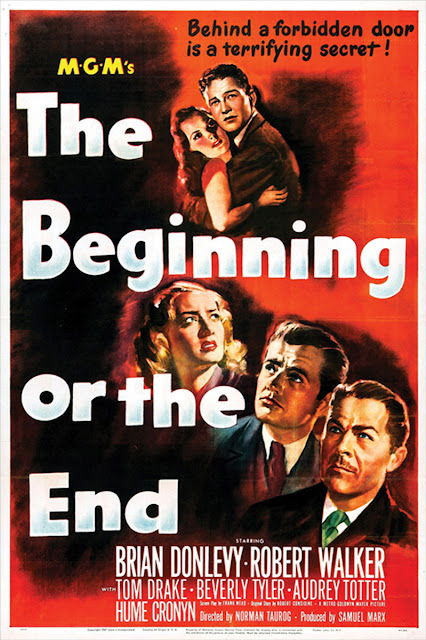 This isn't a noir film!  Nope.  This one is an historical drama about the creation of the atomic bomb.  So, you know, fun stuff.


As part of TCM's Summer Under the Stars, a few weeks back they selected Audrey Totter as their star of the day.  Totter wasn't playing leading roles til later and in smaller films, but in 1947, she appeared in this more-fascinating-than-good docudrama about the evolution of the atomic bomb and it's use in WWII.  Totter appears only in a few scenes as a secretary who happens to be romantically wrapped up with one of her boss's subordinates - very unscandalously.

The Beginning or The End (1947) starts off as the actors as themselves place a time capsule into the earth, informing the audience that the capsule will be opened in 500 years, and contains a copy of this movie as a way to explain to whomever might be around in 2446 what they hell they were up to coming up with atomic weapons.  It's a mournful note upon which to start a movie - and a bit surprising as the same tone continues throughout.  And while Oppenheimer's oft-quoted quote from the Bhagavad-Gita ("Now I am become Death, the destroyer of worlds") does not make an appearance as it came from interviews done much later, the title of the movie should give you an idea of the funereal tone as scientists move ever forward toward Hiroshima, unsure of what they're unleashing on the world.


It's absolutely remarkable to see this sort of film released in 1947 and with the Army's cooperation and permission.

The movie does get it right - this movie is a time capsule.  I've been to plenty of museums and seen replicas of Fat Man and Little Boy.  I've seen the Enola Gay parked in a hanger museum at the Smithsonian annex near Dulles.  We've all read plenty about why we dropped the bomb, maybe specifics of the drop.  But I don't know that I've seen much about how people felt about it.  I didn't believe that the people working on the atomic bomb were ignorant of the potential impact, nor did I think it was decades later that people got their heads around what America (and soon the Russians) now possessed.  My generation was the second to grow up fully understanding the threat of nuclear annihilation from our earliest days, so much so that I was surprised to find out around age 8 or so that the word "holocaust" had been applied to something other than the nuclear inferno we assumed would consume us some night while we slept in our beds or some day when we were at recess.  But this film - made right in the wake of peace paid for in tears, sweat and blood - shows that America understood what it had from the moment the news broke - and silent scientists, working feverishly to develop the bomb, knew well before the weapon was more than a paper proposal: they were unleashing the hand of God upon the earth.

That said - the film is not given a four-star treatment.  What seems like modern Oscar bait, especially as a "true story" ripped from the headlines with plenty of actual real-world weight to support it.  Instead, the movie feels like a very well made expository film to tell high schoolers what happened.  Which, honestly, given how novel all of this was in 1947, could have gone a long way to explaining to America exactly what we now had in our possession.

There are scenes of the first atomic tests that work almost how we used to make training films when that was my job.  Honestly, the Army is one of the best "education" laboratories in the world as they have to deal with all sorts of personalities and intellects, and it's both utterly ridiculous and narratively useful to just stop and explain how a nuclear pile works for the benefit of the audience - especially as pretty much every other movie just treats science as hand-wavy magic that shouldn't impact the plot.  Here, we're learning how - if they did their math wrong, we could accidentally destroy the Midwest. But it also did a really terrifically good job of explaining a nuclear reaction - better than any articles I've read - and they recreate a nuclear pile in a way that - hey, totally made sense.

From what I saw online, it looks like The Beginning or the End was mostly critically snubbed by film critics as well as many who worked on the Manhattan Project - and it sorta bombed at the box office (pun intended, thank you).  Complaints included romantic subplots both scientists and cinema-snobs found tacked on or sappy - which is terribly interesting as a reaction to a post-war movie and there's probably some sociological stuff there worth investigating vis-a-vis America's reaction to the usual Hollywood claptrap when applied to something so serious.  Were this story to be told now - of course it would include a romantic subplot.

And, while the movie tried to hew to the historical record - they couldn't - for example- show how atomic bombs were made with any accuracy, as this was all still a very big state secret.

The cast includes, of course, the lovely Audrey Totter as well as Beverly Tyler.  Familiar faces include Hume Cronyn as Oppenheimer, Joseph Calleia as Fermi, and Brian Donlevy as Major General Leslie Groves.  Other players play a mix of real people and fictionalized characters.  Actor Tom Drake, who plays a young scientist voicing doubts about what they're building, would reunite with Totter in the not-great-but-bananas movie FBI Girl a few years later.

(VERY LATE EDIT - 08/31/2018:  I failed to mention...  The current narrative is that the people of the 1930's and 40's were unaware of FDR's use of a chair.  The suggestion is that "no one knew" and it was a well kept secret by the press.  Which always seemed... suspect at best.  I mean, the man had to show up for rallies and whatnot.  And I do wonder if the lack of conversation about FDR's paralysis was something that just not discussed because it was "impolite".  Well, this movie shows an actor playing FDR in a chair.  Makes no bones about it at all.  Maybe after FDR's death they spread the word, but that seems... off.  They could have easily just shown him behind a desk and said nothing at all, but it's practially like the filmmakers are making sure you see it.

I guess what I'm saying is... maybe we need to re-evaluate the popular story about how much more we can deal with the wheelchair story than people of 1932 or whatever.)

I'm not necessarily recommending the film as the best movie you're likely to see, but it is an interesting bit of history, gilded by Hollywood, certainly, but even examining how Hollywood wrestled with the spectre of the atomic age at this early point is worth a peek.