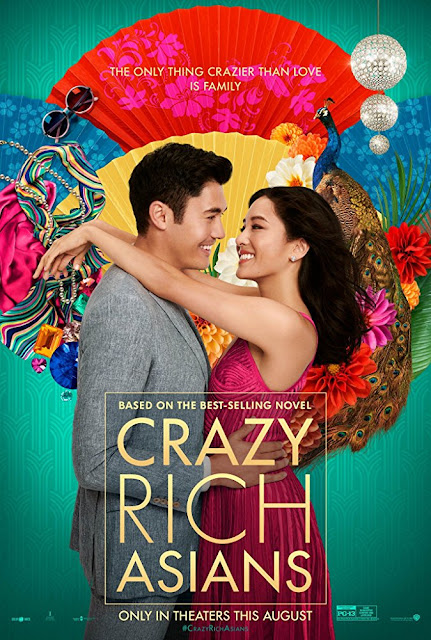 
When I first saw the trailer for Crazy Rich Asians (2018), I sort of rolled my eyes and said "I do not want to watch a movie about rich people being rich and them kinda making it look like money isn't all that, but then also doing money porn."  Also, I haven't seen a good RomCom in, like, fifteen years.  The American RomCom decided to be The Genre That Would Not Try starting in the mid 90's and just becoming an unfunny series of cliches - many of which felt divorced from reality - and by early 00's had become painful to bear.

But mostly, on principle, I did not want to see a movie in which Michelle Yeoh was posited as being wrong about something, because that is something I simply do not believe to be possible.

Much to my surprise, Crazy Rich Asians got good notices (currently clocking 94% from critics at Rotten Tomatoes), which indicated that at least the movie nailed the execution of the formula.  And, hey, I watch a lot of genre stuff and older stuff, and sometimes I just want to see what's new at the cinema and see what the buzz is about.

Yeah, no news here.  The movie's characters with speaking lines are, I think, 100% Asian.  Which is a pretty tremendous novelty in American film.  Given the Box Office - in week 2, having earned back almost 3x the listed budget ((about $84 million on a $30 million budget), America was okey dokey with this movie.  So, let us all hope in the wake of this success, the studios go ahead and throw a lot of their concepts of "what sells' out the damn window.

What this movie has going for it:  (a) kinda perfect direction, but in a sort of subtle way - it ain't necessarily showy, but if execution is what matters - this guy nailed it (b) oh, wow - that cast.  Everyone brings a unique character to the screen - I mean, *many* characters are stereotypes for shorthand but nail it (Awkwafina's creeper brother, for example) but in a comedy, they know what they're doing (c) clarity of script and story.  At no point is anyone doing something just because they need drama, etc...

Let me be abundantly clear - I don't feel like this movie was aimed at me.  I think it was aimed at people who believe in the phrase "beach read" when it comes to selecting books - and that is a valid and legit way to enjoy oneself.  I don't jive with everything the movie had to say or didn't say, but... you know, it was a good time at the movies, did (in fact) execute an incredibly familiar formula much better than any romantic comedy I can think of, and did a fantastic job of explaining to us suburban WASPs the central conflict of the movie - which is actually pretty nuanced at it's core and a reversal of the usual immigrant stories we cheer on screens in the U.S.

I don't think I was wrong in my pre-estimation about how the movie treats and eroticizes wealth, nodding at some downsides but reveling in how cool it is to have so much money you can rent helicopters to transport you to a bachelor party.  The fact that our heroine came from a modest background is nodded at, and is one part of the issue in the movie, but there's never really any suggestion of "maybe this decadence is decadent".  Which - you know - 2018, I guess.  I got mine. Instead it's treated much more as a peak behind the curtain for the naive girl who isn't used to people who buy million dollar earrings at the drop of a hat.

I also understand that being crazy, crazy rich or at least famous - is such a commonly held dream - trying to apply criticism of the super wealthy is somehow considered naive by people who watch a lot of Kardashian related programming.  We'll just put a cork in my not-Marxist-but-probably-a-product-of-my-upbringing-skepticism-of-the-morality-of-extraordinary-wealth and return to my performance of economic status and virtue theorizing some other day.*

From what the internets tell me, Awkwafina is a bit of a divisive figure for reasons that are rooted in all sorts of cultural appropriation accusations.  As The Whitest Guy You Know (tm) I am not even going to step into the middle of that one.  But, she is funny as hell in this movie, as are - oh, just go to IMDB and scroll down.  I think only Michelle Yeoh isn't going for yuks in this movie.

I do wish we got a bit more about what Constance Wu and Henry Golding see in each other - rather than what she didn't see in him in NYC (his outrageous bankroll).  But it's not *entirely* the point of the movie.

The movie's main conflict - the sincere belief in the filial duties and threat Rachel (our American character) presents to her boyfriend's mother's plans for her son - is beyond the usual RomCom "oh, the mom is a jerk and doesn't like me" stuff.  In almost all ways, it's not specifically Rachel that's the problem, and that's why the tension is so fascinating.  From their points of view, both women are justified - and neither can do much about who they are and why they believe what they do.

The movie has a what-is-sure-to-be-seminal mahjong scene as the two women duke it out and sort out their differences, and were this a drama, the rest of the movie would be montage as things resolved.  I've only played the game once, don't remember anything but actually wanting to play again, and never have - but don't worry - the scene is kinda perfect enough that you don't need to know much about how the game is played to get the gist.

Given that - no shocker - the movie has a satisfactory ending where Rachel does win over Michelle Yeoh's stern matriarch, I would have liked a sentence or two about what our handsome strawman boyfriend character planned to do.  Because it sounded like he was giving up his family billions, but maybe not?  I guess that's what Crazy Rich Asians II: Crazy in New York will tell us.

And I absolutely lost the thread of what was happening with Astrid, the boyfriend's sister and her husband.  It seemed like they had some stuff to discuss, and instead the movie casts the husband as a cad when - frankly - I kinda think maybe he had a point and something she coulda stood to learn about before embarking on her next romance.  Because as near as I could tell the moral of her story was "f. u.  I'm gonna unapologetically buy a whole lotta expensive stuff because I'm insanely privileged and always have been - also, model beautiful."

Anyway - Michelle Yeoh was not entirely wrong, and that made the movie okay.


*see, only T'Challa seems to know what to do with extreme wealth, in my book