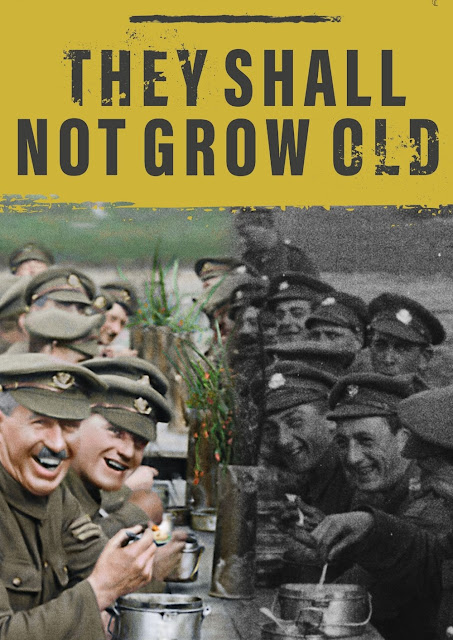 
If you're unfamiliar - Jackson was asked if he would like to work on a doc by the Imperial War Museum commission out of the UK.  Their requirement was that Jackson use the 100 or so hours of film footage at the archive and hundreds of hours of oral histories (piquing my professional interest) and do something "new".  Jackson took the film to his workshop (not WETA) and applied massive computing to the footage to fix issues, as you do in any restoration, and then slowed and smoothed the footage through interpolation between frames, creating a seamless sense of motion we're used to from 24fps film.  I won't go into all he did to colorize the film - but he did so respectfully and accurately.

While these details seem cosmetic - we were always able to see young men in uniform slogging through the mud, crouching in trenches - here, it's anything but.  Black and white film, especially low grain, herky-jerky hand-cranked, lower frame-rate film, full of scratches and holes, can create the illusion of distance between viewer and subject.  We can look at these blurry faces and their odd motions and strange, out-dated clothes and say "this is not us.  We are not them.  This is long ago, and the haze of history has descended between us.  What lives they led and how they led them have no relation to me or those I know.  They are far away and unreal."  And while that may never be a conscious thought, we can cordon off these faces and people as fictional, as having nothing to do with us.

The effect of having these faces bright and cheerful - especially as they look towards the lens as they invariably do (after all, a film camera in 1914-18 was a total novelty, especially on the Western Front), is startling in its immediacy.  Jackson's colors never reach Kodachrome perfection, but they resonate like memory - not entirely accurate, but close enough.  We can see the jollity, the boredom, the fear in any group shot.  We see young men shoved in holes and given a mandate to probably die within the hour.  On the Western Front, a shell could fall from the sky and kill you mid conversation, a sniper could get you while you were eating your breakfast.  You were asked to fix bayonets and hurl yourself into the path of machinegun nests, or you might just see a cloud of mustard or chlorine gas floating your way at any moment.

Here, those details are shown in color, in real time.  Jackson wisely does not shy from decaying corpses of men and horses, nor from the horror of disease and environmental conditions wreaking havoc on the soldiers.  The glories of war seem pretty far away in the day-to-day.

In the 30 minute featurette played alongside the film, Jackson reveals the technical tricks employed and that he, himself, is a collector of WWI ephemera, from print material to actual cannons of the era.  He has his own wardrobe full of WWI uniforms he could use as reference.

The audio track of the doc is culled from those hundreds of hours of oral histories, which provides a sort of auditory montage to give both a range of experiences and share commonalities across the British forces down in the trenches.  As always, first-hand descriptions are the most powerful, whether in producing horror or laughter, and in providing some context that hasn't been picked over and divorced from life by academics.

Unlike the work of Ken Burns (for example), this doc doesn't identify the speakers or their specific roles.  It's a barrage of voices, differing British accents, but all men of a certain age.  When the credits finally rolled, it seemed to be four dozen or so names.  Jackson himself said he was trying to make a "generic" experience for the viewer, but...  man.  That's a hard sell.

Because the voices shown do not match the faces in the films - those anonymous soldiers are given stories and actions that we can intellectually understand are not anchored to the images, but there's no question Jackson is generating a narrative.  And - to that end - he mixes and mashes the stories of the narrators into a common, shared story - one which represents no single, individual battle or confrontation on the front, but more of a representative amalgamation.

While we can assume Jackson's work here is honorable and benign, I'm wary.  Audiences tend to just go with the flow, wrapped up in their emotional reaction to a story, especially one they *know* to be true (this is a doc, and building a case to get to a or the truth is supposed to be an objective).  Even in this era when we're perfectly aware of how soundbites work, how images and audio can be manipulated, how an innocuous comment can be imbued with meaning, or a malicious comment dismissed as a misunderstanding - we still may need the rails on historical narrative that comes with the identification of speakers, of a limited number of speakers.  The manner in which this could be manipulated is easy enough to imagine - our minds are more than happy to find meaning juxtaposing between image and sound - and if the sound is cut and managed with ill intent?

All film is manipulative and drives home arguments and stories that make a point - but in context and with framing - we can mitigate some of what could be used to revise and distort statements and overall narratives.  But maybe I'm just paranoid.

Nonetheless, Jackson's film is a tremendous achievement, bringing the events of a century ago right into the modern age, without comment or overt messaging.  And, for many, it will provide a tremendous entree into the life of the trenches, of what was endured to restore peace and democracy for the twenty years before we did it all again.  American high schools and colleges do the poorest of jobs explaining the forces that led to WWI, and so it seems the whole war is glossed over, with the myth of the importance of the American Doughboy tossed in as how we solved Europe's dilemma.

Jackson does say he doesn't cover naval, aerial or other fields as he has to pick a topic and make it work, but he does seem to have some wheels turning.  I'd love to see what he'd do with the footage from the homefront, what stories we could spin of a generation of women suddenly in factories, learning a trade beyond domestic work.
Posted by The League at 1/22/2019 11:59:00 AM