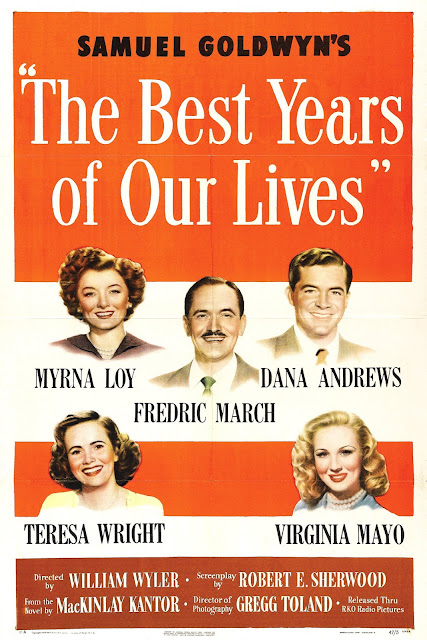 
The Best Years of Our Lives (1946) rightfully won accolades and awards upon its release, telling the story of three returning GI's in terms that try not to gloss over the hardships and adjustments those who went to war in WWII must make as they come home and attempt to re-enter civilian life.  Perhaps as much or more importantly, the movie doesn't ignore the adjustments and expectations of those who were safe at home, including arcs for the folks who didn't go, for whom life was not on pause as their loved ones - or even former coworkers - disappeared for a few years.


There are some of you who might get what the disruption of war brought to everyday life, or who get it to a much larger degree, especially those who volunteered and served overseas sometime in the past few decades, and I'd be curious to hear how this movie lands - so do speak up.  But for a movie made of the moment, while we can't quite grasp what it's like for a nation to utterly transform itself as the US did during WWII, there's little lost to the modern viewer in intent, and there's no question, even if it's not us, that the movie holds up terrifically well.

I'm not clear on what's still a household name these days and what is not, but the movie does feature actors who were big players at the time, from Virgina Mayo to Fredric March to Dana Andrews to Myrna Loy.  If you're looking at the poster and trying to place Teresa Wright, she was "Charlie" in Shadow of a Doubt.

While there's gloss to the film, it isn't afraid to work in uncomfortable corners, maybe foreshadowing the Oscar-bait films of today.  Our three servicemen return in the nose of a B-17, the fields outside their fictional hometown of Boone City a boneyard for decommissioned planes.  Andrews plays a former bombadier - a role we know was one that courted death just by getting in the plane, but was seen as a glamour job in a war that saw countless foot soldiers slogging through the mud in endless campaigns.  March is the former man of means, a banker, who wound up as a Sergeant in the army, getting to know men in a different income bracket.  And, lastly, in what is still a terrific bit of outside the box casting, Harold Russell was a real-life veteran who had lost his arms below the elbow during the war.

Through Andrews we get to see a number of challenges facing the returning airman as his skill set provides him with no obvious career training, he's clearly suffering with PTSD and he married in a hurry during training in Texas (we can assume San Antonio) to a party girl (Mayo) who isn't that interested when he gets back.

March doesn't know what to make of his good fortune upon his return.  His children have grown and his son, in particular, has a detachment and has become independent, but out of touch with his own experience.  At the bank, he's asked to only take the promise of the GI Bill so far.  And, it sure looks like he's picked up a drinking problem.  On the other hand, he's married to Myrna Loy, so...

Russell's storyline is the most visceral as he returns home to his childhood sweetheart (Cathy O'Donnell - They Live By Night) but whom he now feels he can't support or be a husband to.

At home, jobs are hard to come by, and of course the time with loved ones isn't the only thing lost.  The titular "Best Years of Our Lives" have been spent on other occupations while at home, those with poor vision and flat fleet were able to move up in their careers and establish lives.  That these *can* be the best years is not yet known by the audience of '46.  Anyone who thinks before or after the war that America was moving in lockstep on the morality or necessity of the war, who thought we'd joined the right side... it's curious to see a movie acknowledge there were those who were against it and still choose to shoot their mouths off.  Further, those who know they can now be eclipsed by those returning, that their window is closing, get set in a defensive posture.

For all the melodramas about "real people with real problems", the scope and scale of the open wound my grandparents generation dealt with - and which every war since has grasped with - doesn't get discussed much.  And while movies like The Hurt Locker are in the same ballpark, the focus on a single and often deeply problematic story can make the situation seem isolated or a one-off.  While I am sure veterans talk/ed at the VFW and people shared issues in confidence, just airing the reality of what was going on in homes everywhere in the country had to have been a relief - sharing time with different soldiers and their families pushes the idea of an *unremarkable* story, that this is what *we* are dealing with.  Wisely the film doesn't provide any pat answers - this is 1946 and we were still getting soldiers decommissioned and sent home with varying ability to reintegrate.

I liked this movie a lot the first time I watched it, but this time... I dunno.  This time it just blew me away.  I suppose I knew a lot more what to expect and wasn't just trying to keep up and hope for more Myrna Loy screentime.  But the full weight of what the movie took on just really hit me.