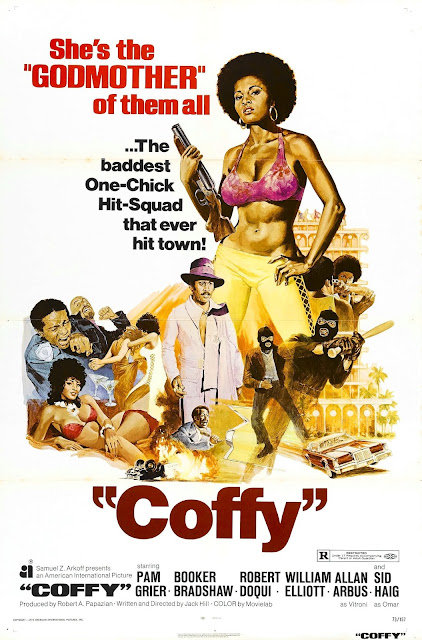 Jamie and I went out for a lovely dinner for Valentine's Day, followed by catching up on Star Trek: Discovery, and then - somehow - I wound up watching this movie, and I think for the fashion choices alone, Jamie didn't object.  I thought I'd previously seen Coffy (1973) when I started it - because it's currently streaming free to Amazon Prime subscribers, and, I didn't intend to actually watch it.  But I hadn't seen it and the next thing I knew I was an hour in.


I won't bother with the plot - it's a revenge story that doesn't really work except in the joy of watching Pam Grier methodically make her way through a network of organized criminals step by step.  She's the Frank Castle of the good-looking-ladies-who-are-nurses-by-day set  Of course Coffy is one of the cornerstone films of the Blaxploitation film movement, and as such, it's firmly of the corresponding era and movement.  It's not clear that Coffy is a *good* movie, but it is an enjoyable film with a pretty solid soundtrack.  More important: movies with Black protagonists were a novelty heading into the 1970's - let alone movies featuring African-American leads at all, but between the social change of the time, Hollywood's need to compete with TV by doing things TV didn't, and a deeply underserved audience came together for a run of movies that do something different and speak to concerns and voices that didn't previously make it to the big screen.  And this movie, one featuring a woman as the lead no less, gives us a snapshot of how those forces converged.

I don't want to oversell it, this movie is more reflective of the era and movement than it inspired great leaders (I dunno, maybe it did?), and maybe worth watching as a time capsule or window into a different time that informs our current entertainment landscape and speaks to the era. 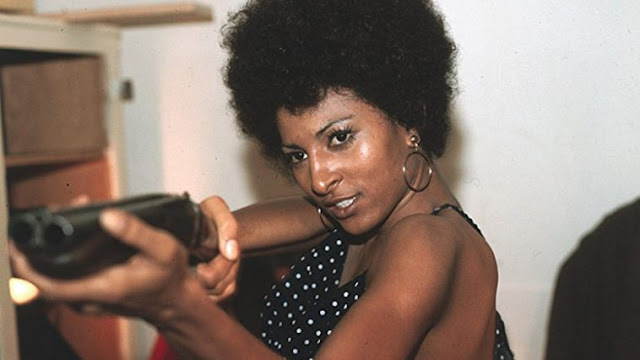 That said, there was clearly a mandate to show as many boobs as possible in the film.  That "exploitation" part of what's clearly a grindhouse film is very much intact.  And, boy, howdy, is there a lot of toplessness on the part of women in this movie, just absolutely knee-capping what now otherwise might be considered an intersectionalist feminist revenge piece.

I wouldn't be the first person to point out that Pam Grier is...  kinda great.  She's rougher here than she would be in movies after this.  But you also get the feeling the direction in most scenes was "we have one take, Pam, and we're already rolling", so it's hard to know where her chops were at this point.  The film essentially uses her overall Pam Grier-ness as a special effect, and you want to tell the producers "less is more sometimes, let her just be the bad-ass she clearly is.  That's what will make people come back and watch again."  Fortunately, she did go on to be Pam Grier we all know and love and fulfill that destiny.

The movie also features Sid Haig, who is apparently way older than I realized, and the guy who played the police captain in RoboCop as a well-dressed pimp (some heroes DO wear capes).