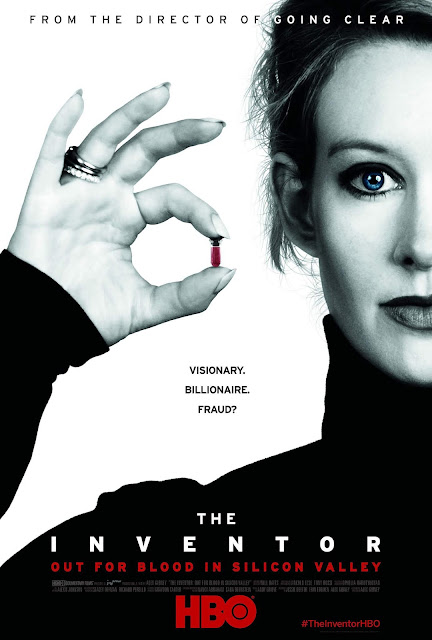 
Look, a whole lot of smart people work in bio/medicine.  It's a lucrative field and deeply distinguished in academic circles.  Not everything is Big Pharma raising the price of life-saving medicines at a geometric rate.  Most of it isn't.  My point being - it seemed very, very odd that a college drop-out had the knowledge, training, etc... to do more than whiteboard a new technology that *should* have been the natural evolution of what lab technicians would be suggesting to equipment suppliers.

Folks who know me offline know that I'm a terrible killjoy and no fun at parties mostly because I'm deeply skeptical of anything that sounds really, really amazing and especially if it's tied to a specific personality (especially those built for Ted Talks and SXSW presentations.  I just see "snake oil salesman").  Show me a working demo or product, and I'm totally onboard.  But until then, GTFO.

Suffice it to say, the articles I was reading on Theranos tripped my Spidey-Sense, but I sort of forgot about it and moved on.  I mean, it's not like Science was going to come ask me what I thought.

And then, one day, an article appeared that stated "actually, Theranos's tech didn't work as advertised, and it's basically a lot of smoke and mirrors at this point" and, frankly, it was all a lot worse than anything I'd expected.  After all, they had actually sorta gone into production - or were at least taking patients.

(Late edit:  I have just realized - Theranos was Fyre Festival for old, rich dudes with money-boners).

The Inventor: Out for Blood in Silicon Valley (2019) is a fascinating doc that digs into what occurred, but even at the end of it - you're going to be left with maybe just a different set of questions than the ones with which you entered.  I was aware that founder Elizabeth Holmes was getting profiled a lot, getting a lot of that Cult of Personality treatment by business and standard press.  I wasn't aware that she was rubbing elbows with George Schultz, getting investments from Henry Kissinger, Rupert Murdoch, etc...  Nor was I aware of the practices of Theranos, including legal maneuvering of all different stripes.

It sounds odd to say I don't want to spoil a documentary.  I certainly don't want to summarize the doc's finer points, but the road from "exciting start-up with an odd-ball founder" to "something is wrong here" to "so, how bad *could* this get?" is pretty remarkable.  And it's something that doesn't matter when you're talking about making an app in Silicon Valley, but it IS something that matters when you're telling working class people they can get medical tests and care at an affordable rate - but you're giving them the wrong results.

A few things struck me as curious about the doc.

In an era where people go around denying science and scientific inquiry, seeing how the science done right actually works might have helped explain both the magnitude of Holmes' vision and the cosmic-level obstacles to achieving that vision.  Medical testing is intensely rigorous and it is so for a reason.  There are a lot of nods toward "well, lab blood work is actually pretty hard" - but they never *show* it, and I think a comparison would have been useful.

We never really get what Holmes' appeal was to people who should have been savvier and more skeptical.  Was it FOMO?  And why this?  Why blood testing?  And aren't there certain ethics we should be concerned about when something like this looks this immensely profitable?

But more than that - getting anyone on camera to say "why did this young woman, with minimal formal education, with no experience in the field, strike you as *the* person to get behind and invest in?"  What was going on with the older, rich men she was courting?  There are a hafl-dozen angles to pursue there, between their failure to grasp how medicine works versus how something like Google occurs - with, possibly, a bit of disdain for scientific method and inquiry?  And the weird bag of - sure, Holmes is an attractive enough young woman, but her obviously stagey persona...*  What did these guys see when they looked at her?  Was there some latent sexual component?  Was it all believing in someone they thought of as a super-genius?

And, of course, the doc never really explains anything about Holmes.  While we know what happened with a hint of why - there's a veil between the filmmaker and the subject.  While they left her family out of the story, there are questions about who she was before the black outfits and in what context did she grow up where this is where she wound up?  And, of course, how did she make all of these crazy contacts?  Folks like you and me do not get appointments with Henry Kissinger or money to start biomed companies as 19 year old college drop outs.

Likewise, there's a massive gap in information or looking into her partner for a portion of the life of Theranos, "Sunny", who can be seen leading team meetings that sound like the last days of the Jim Jones cult.  "They're all against us!  But we're anointed and going to save the world!".

In a lot of ways, the doc should work as a very modern, very timely cautionary tale about systemic failure - when those who should know better don't, how systems of review can be played, and so on and so forth.  I hope it puts a thought or two in VC's minds as they fund projects based on gut and what we think of as "genius" and what movers and shakers look like.

In this world where the media loves to focus on a good story and a good figurehead like Holmes, who they can spin her eccentricities as part of the mind of a genius we plebes can't understand, it's worth being a bit skeptical until you can see a working demo.  If my two trips to SX have demonstrated anything to me, it's that there are a lot of people getting paid a lot of money for not producing much of anything, who talk about how "this is the future", but are selling you vapor.  The people with something to show don't need the theatrics or the political connections.

I don't give a shit if something bad happens with your table-reservation app or identifying hotdogs with a cameraphone, but we should all care when we think a superhero has shown up who wants to bypass all built-in safeguards and regulation tied to health and safety.  That is insane.

There's way, way more to keep talking about, but, as I say, you'll really wind up with more questions than answers once you walk away from the doc.


*Holmes herself is the opposite of flirty - she's more like a nerdy robot who likes tiny blood packets.  I would not suggest she was, like, flipping her hair and giggling at Rupert Murdoch.  But I'm baffled how she got these guys to play ball.
Posted by The League at 3/24/2019 01:01:00 PM

I'd like to watch this doc but HBO is not a thing here, or at least not in my cord cutter lifestyle. Regardless, I'm fascinated by this story. I recently read Bad Blood: Secrets and Lies in a Silicon Valley Startup and I highly recommend it if you are looking for more details on this story. I'm incredibly shocked that something like this could possibly happen. As you said, hopefully those VC's will hit pause next time something like this comes up.

You may get a lot more out of the book - the doc was mostly just getting people up to speed on what happened. I would assume an author would be a bit more aggressive in chasing down some of the answers.

Unfortunately - because the people who were playing ball with Holmes were an odd assortment of VC's, paired with everyone feeling like they can't miss the next Google or whatever is going to mean the people who know how to look the part are going to keep wowing the moneyed rubes. But, maybe, healthcare regulatory agencies will think to look twice when someone says they don't need to go through the usual processes and procedures.

For me, the most quizzical thing about Holmes was that she chose to speak in a baritone in public. I guess she thought she would be taken more seriously in a male-dominated field? I also read an article about why her hair looks so bad (split ends and burnt out), and I think it goes along with the voice modulation. It was as if Holmes wanted to hide that she was an attractive WASP female borne out of a WASP family.

As for the VCs, I think Holmes presented Theranos as a tech company, not a medical one so these VCs never really thought about the human implication of what Theranos was doing. Like you said, if some company making a stupid app or service crashes and burns, nobody gets hurt (well, maybe egos) but with something like blood testing ....

The voice is odd, but I've worked with a few women with similar voices and didn't honestly think about it *too much* other than "she is a similar sort of nerdy". And I noticed her hair was often kind of a mess, but when you're working those hours... But the alternative is certainly an option.

That the doc does so little to investigate the puzzle of Holmes herself can lead to speculation that makes neither subject nor the questioner look great. I am not sure I'd be looking so much at the appearance of a male entrepreneur (pretty sure I would not, so I'm trying to be fair when I consider the job she was in).

I think that's probably right on the tech v medical company notion. That was certainly the angle I remember in the press and part of what threw me off.