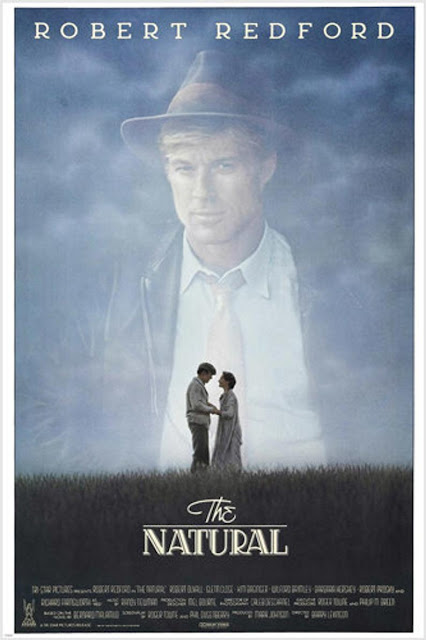 When I was a kid, for some reason my parents took me to see The Natural (1984).  My memory is that I walked out, told them I didn't understand it, and somehow got in trouble for making that statement - which just led to further confusion.  I dunno.  Not everything makes sense when you're 8 or 9.

In the intervening 35 years, I hadn't rewatched the film.  Not because I was traumatized, but I just never got around to it.  And that's unfortunate - because The Natural is a fine movie and the sort no one is making anymore.   Lyrical, with craftsmanship to spare, spanning decades, borrowing from other myths to create a new mythology, blending grounded reality with fantasy and the remarkable stories embedded in sport - it's an ambitious film, and I can't knock it.

During a certain window, director Barry Levinson turned out a series of great movies, from Wag the Dog to Rain Man, of all different stripes, and he took some phenomenal chances, trying to capture mood and atmosphere to tell stories that were not always 100% successful but still interesting (see: Toys).  He dabbled in TV to bring us Homicide and he continues to be busy with a wide number of projects now that he's more of a producer/ executive producer.  But, man, the guy could direct.

The entire film was seemingly shot in magic hour, the sun-dappled look both nostalgic and romantic, fitting the fairy-tale mood of the movie.  And if we're talking about a fantastic fictional story of the rise of a baseball player in pre-WWII America, and you've ever spent time in one of the grand old ballparks, dug into the way the truly dedicated fans think of and revere the game, it's a deeply fitting topic for the treatment.  Baseball is a sport steeped in 150 years of memory with it's most ardent fans (I am not one, and love that I'll never know 1/4 of all I could about just the Cubs) able to discuss players who died before the Eisenhower administration.  Rule changes (necessary ones) are seen as heresy.  Even player behavior and decorum is closely monitored by some fans who see anything but a mid-20th Century male stoicism as an insult to the game.  The vision of brightly colored uniforms, jumbotrons displaying scores and furry mascots blends seamlessly with sepia-toned photos of young men (who all look far rougher than any 20-something today) in loose-fitting pin-striped outfits, kneeling in dry, dusty fields.  Clubs still talk about curses with origins in a time before stadiums had electric lighting.

The Natural may be a sports fantasy for the more seasoned adult, wiser in the ways of the world when success hits - but not invulnerable to missteps. Against the streets of late-Depression America, the movie works in the same realm as Arthurian legend - our hero playing for The Knights, his success tied to a certain moral purity he has to uphold - spoiled when he leaves the safe confines of upstate New York and finds himself with scandalous women and those who would exploit him.  Things go south, and Roy Hobbs, a kid on the verge of becoming the greatest there ever was, disappears for 16 years, only to wander into the dugout of a failing team in the first weeks of what looks to be a dismal season.  Middle-aged (Redford was near 50 when the film was released, but playing 35 - a senior citizen in baseball terms), unknown and taciturn, his new manager, dealing with issues of his own, is furious at what he's been sent.  Until, of course, Hobbs gets a shot at bat with "Wonderboy" the possibly enchanted bat.

The film contains what would now be considered a wildly all-star cast (then anchored by megastar Robert Redford), we have Barbara Hershey, Glenn Close, Kim Basinger, Wilford Brimley, Robert Duvall, Joe Don Bakker, Richard Farnsworth, Robert Prosky, and a curiously uncredited Darren MacGavin.  Maybe it was considered as such then, but it's a huge thing to see all these people, plus a very young Michael Madsen as a would-be-star right fielder.

I forgive my young self for not getting the film.  The themes no doubt went clear over my head - although I vaguely remember getting that messing around with more than one woman was trouble for ballplayers.  But the dialog is simple, clean and perfectly elliptical, never quite expressing the full thoughts of characters, the action on the screen, slow and steady as it might be, carrying the story.  Of course, Redford's immense talent doesn't hurt to convey what we need to know, and I don't think I need to tell you Glenn Close can play fifteen separate emotions and thoughts simultaneously and convincingly as she tries to sort out what it means to see Roy Hobbs again.

In short: I am very sorry I hadn't watched this movie again over the decades.  It's not everyone's cup of tea, and it may play particularly well to things I like in movies, but like a ballgame, it has a pacing with drama in the margins and moves occurring when it seems like not much is happening, with short bursts of great activity and moments of heartbreak and triumph.  I dug the hell out of it.
Posted by The League at 4/10/2019 06:00:00 PM