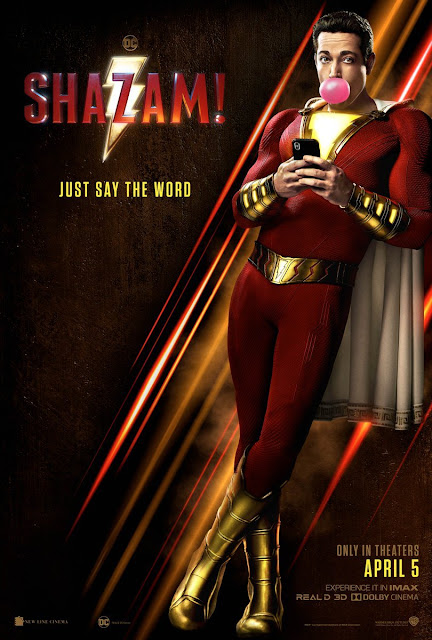 
It's hard to say I'm a Shazam/ Captain Marvel fan - there's just never been much of it around.  Jerry Ordway's Power of Shazam work was on the shelf when I was in high school and college, and I picked it up here and there, and I've enjoyed the occasional mini-series or one-off, and certainly having Captain Marvel appear in JSA pre-Flashpoint.  But the character just hasn't appeared with any terrific frequency, and when he did get a mini or solo comic, it was through various lenses and takes that seemed like vanity projects for particular artists (which is great!  I buy that stuff, but when it's over, its over).  Honestly, I never got to see much of anything of the full Marvel family outside of a cartoon I vaguely remember from about 1981 in any medium.  But in theory, I like the character - and, frankly, have found some of the darker stuff they've done with the idea, like in Kingdom Come, could really work when in the right hands.  Heck, I even get where Morrison was going with bondage-gear Mary Marvel in Final Crisis.

I haven't read any Shazam since The New 52, and my understanding is that the movie is based on what happened in those comics, including a newer, well-received ongoing at DC.  But in this version, Billy isn't alone, occasionally touching base with Mary and Freddie, he's in a group home with several other foster kids, and - as will come as a surprise to no one over the age of 13 - finds a way to build a new family from this new assortment of kids and foster parents.

We still get the train (yay!) taking Billy to the Rock of Eternity, and a wizard named Shazam.  There's still a transfer of power and a lesson that the name is an acronym.  But Billy's parents aren't lost explorers, Sivana isn't just a mad scientist with a weird-shaped head, and now he's in foster care - searching for a mom who lost him at a winter carnival when he was about 4, I guess.

Let's be clear: this is family movie, something DC *should* have been making since Man of Steel.  I think Childfree Americans like myself can still enjoy the movie a great deal, but I am pretty sure the wish-fulfillment aspect of Shazam plays great for a younger audience and - because the focus of the film is about family and making the most of it - of course parents are going to enjoy seeing it with their kids.

I do wish the movie had spent less time showing us all the ways Billy could futz around with his powers and Freddie's attempts to turn Billy into a social media star, and given us more time with the other children in the home and the foster parents.  If we're going to value Billy's decision, it helps if we see those kids reaching out to him or we know something more about them, and I think it would have helped with some of what happens in the third act.

I am absolutely puzzled how this film wasn't released at Christmas as, much more so than Aquaman, it's a kid's movie AND IT TAKES PLACE AT CHRISTMAS.  But DC is not in the business of making sensible decisions, so here we are.  And - since Billy can't even say "Shazam" - I think we ended the movie without the character having an actual name the press would call him.

This movie takes place squarely in the existing DCU (I think).  Batman and Superman definitely exist.  Freddie wears a lot of Wonder Woman t-shirts, so I think we can assume she's around.  And I enjoyed seeing the mix of artifacts Freddie had collected (newspapers, etc...) as well as the toy-ification of these real-world heroes via DC's partnership with Mattel.  But even if DC Entertainment decides what they want to do is move on from the Snyder-verse take altogether (as well they should), there's nothing here that says our Batman and Superman need to be the same, exactly, as what we saw before.

The villain of the piece is properly villainous and not saddled with, like, schmucky sidekicks cracking wise or playing "doofy" that would be the 90's way of signaling to adults watching the movie "we filmmakers think this movie is stupid, too".  I was never exactly clear on what Sivana was going to do other than unleash the 7 sins of the world upon mankind, but as I have fb, twitter and tumblr, I'm pretty sure I know how that plays out, anyway.  But, it doesn't matter - he's really just there to threaten Billy and Fam and play Evil Opposite to Billy's youthful exuberance.  That said - there's a scene where he confronts his father that seemed... I dunno...  unnecessary.  The sort of thing that would leave a sensitive little kid otherwise enjoying the movie kind of reeling.  I mean, thematically, it fits, but... it just seems like there was a less overtly violent way of accomplishing same.

Unfortunately the end of the movie had been ruined for me by a stroll down the toy aisle at Target.  I get that they wanted to make action-figure coin on the movie, and I hope that they do so, and I doubt those toys meant anything to kids who hadn't yet seen the movie.  But, yeah, I spent the second half of the movie thinking "when are they going to get to the part where the kids transform?"  Which, honestly, made the extended action sequence that is the last 20-25 minutes just feel like a crawl until we got there.  And, then made it feel like they could have cut out ten of those minutes and lost nothing.

Anyway - hopefully they rush the sequel into production, because that part really was pure joy.

Look, I have no idea where they got this cast from, because everyone in it is weirdly great.  I was skeptical of older casting for Billy and Freddie, but by giving the kids a couple of extra years, they could land real actors and not Disney Channel-style hammy little kids delivering lines in sing-song.  I absolutely bought them both, and the kid playing Freddie could have single-handedly taken the movie down had they cast the wrong kid, but, nope... he nails it.

Honestly, I was also skeptical of Zachary Levi, but that guy was pretty terrific, and managed to land just the write tone.

The direction is also several notches above what I expected - even the dumb gag of Shazam going to buy beer we'd all seen in the trailer played way better than I expected in the actual movie.  And that's just sort of the film all over - everything could have been one of those cheap, throw-away films from a bygone era, but instead, by actually trying, you get one of the most watchable DC movies to date, and probably one that will be a lot of kids entry point to the DCU.

If this is the direction the films are going - and Doom Patrol shows the potential for what they're willing to do on TV - Marvel may finally actually have some competition.
Posted by The League at 4/07/2019 11:55:00 PM

I also thought the fight scene at the carnival went too long. But I looked over and both kids were loving it the whole way through. Plus we got that fantastic "I can't hear you" bit. Both kids were 100% into this movie, and I can't say that about any other superhero movie we've seen at the theater.

I try to be mindful of "who is this for?" when I'm watching a movie, and I am thrilled to hear your kids liked the movie this much. I've always thought Shazam was a great story for little kids, and its unfortunate that DC's push into comic shops meant little kids sometimes get ignored, or get treated with sanitized versions of characters intended for older readers (something I sometimes question). With Shazam, though, they get the whole package. Glad it was working for them!

I actually liked the trailer for this movie, but when Amy asked me if I was going to go see it, I realized that I just wasn't up for seeing yet another superhero movie. This probably isn't the right forum to express that sentiment...

Doesn't affect me none. I will say - the trailer goes out of its way to hide some of the better stuff, but I don't want to oversell it.

I saw it yesterday with M and S, and while we all three liked it okay, none of responded to it very enthusiastically. Even Samantha thought the plot points of Billy looking for and finding his mother, as well as the bad guy wanting revenge on his father and brother, were handled hastily and not really given the beats they needed to really connect.

Thankfully I haven't been to Target lately, so the end wasn't spoiled for me. I loved seeing the kids transform.

Yeah - I don't know if they minimized the plot with his mom because: holy smorgasboard, is that a lot to unpack + super depressing if you think on it (and waaaaay different from his original origin or the one I knew in the 90's), or they just had too many cooks in the kitchen on the script or what. It was weird because they blew by that stuff you mention, and then spend all this time on Billy not really doing much and then a full 20-odd minutes on the overly complicated final fight.