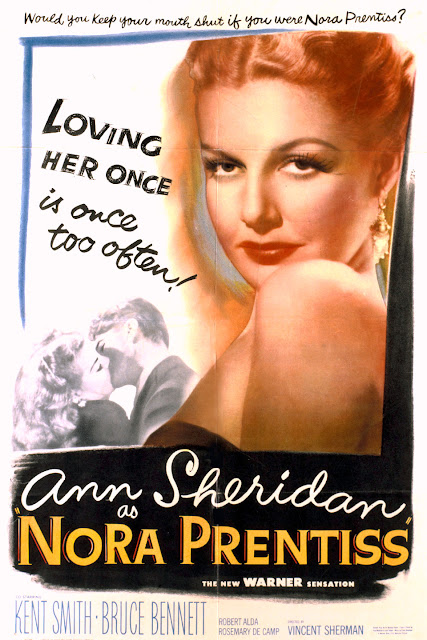 
Nora Prentiss (1947) follows Dr. Richard Talbot (played by Kent Smith), a button-down physician with two square-as-hell kids, a nice house in SF, a bustling practice and a wife who is taking way too much delight in becoming a matronly bore.  He's already getting edgy about the rut he's in when, one evening, a young woman is struck by a truck outside his office and he brings her up to check on her.  Ann Sheridan plays the titular Nora Prentiss, a lounge singer with a wicked way with a line and not much working out in her life.

Tip of the hat to the filmmakers as this odd-couple actually do sort of make sense - she can go for a guy who isn't much like the usual nightclub patrons and she's everything his wife is not.  Nora is also very much *not* a femme fatale.  Attracted to Talbot, sure.  Knows she's up to something she shouldn't be... yeah.  But rather than a temptress, the two seem unable to ignore that this *does* work for them.

If it's a Woman's Picture, it's that "the other woman" isn't ever cast in a negative light, and she doesn't trap the good doctor, put him in a spot, etc... If it's noir, it's that Talbot - in his desperation to be with Prentiss, makes some fateful and incredibly poor decisions that upend his life, specifically so that he might have a shot with Ann Sheridan (and who could blame him, really?).

Because this isn't a film of high crime or insurance investigators up to no good thanks to how a woman looks with a cigarette and an ankle bracelet, and that Prentiss is more a real character than a concept, the film plays more like a melodrama than the usual noir faire.  And that's great!  Our doctor may be a bit of a simp, and you may want to smack him at intervals throughout the film, but it's still a terrifically engaging movie.

The finale is actually oddly moving, and a curious twist for noir.  But it's also a wildly original conclusion to a movie and if you've seen it, I'd like to high-five some time over this movie.

I don't know what to say about Ann Sheridan - that she's not in more pictures I've seen and that she's not better remembered is a crime.  She's got a heck of a way with snappy line delivery, but she's got range.

Kent Smith, maybe less range, but as the nebbishy - kinda unwittingly handsome nerd here - is pretty terrific.  Muller described it as a career best, and I'm going with it.

The movie also features Robert Alda - father to Alan Alda, and Clifton Young, a player in many films of the era and a former Littler Rascal.

Director Vincent Sherman has no shortage of credits, but I admit to having not seen much of his work.  I've had The Damned Don't Cry on my hit list for a while, and he does well here with his actors.  But the MVP of the behind-the-camera staff is the always good James Wong Howe, who does more with a shot and lighting than you or I would come up with on our best day (actual DP's reading this are either agreeing with or furious.  Well, I won't take it back.).

If you're looking to trick someone into a noir who normally isn't into that sort of thing, and a tale of doomed romance and the fates wreaking havoc... this one ain't bad.
Posted by The League at 6/15/2019 02:37:00 PM