Even if you've never heard of Louise Brooks, you know the style she made famous.  A Jazz Age Baby, post-vamp, flapper-styled girl with an aggressive, banged bob. 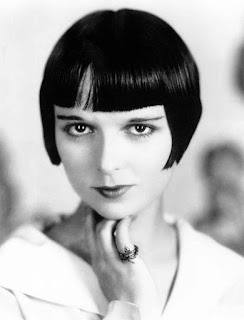 Of course others had it.  Such stars as Pola Negri sported similar for a bit, but at this point in 2019 pop culture, the reference tends to be to Brooks who only made a few films and wore the style in her most popular films (and who has had a curious cultish fanbase since the 1980's).

I wouldn't normally harp on someone's hair in a movie but (a) TCM showed the movie as part of a series about "famous movie hairstyles" and (b) there was an actual ripple-effect here in the wider culture that resonates to this day, "the Lulu cut" signifying a certain sexual allure (see: bob wigs at Party City).

After a career as a Ziegfeld girl and kicking around American movies in Hollywood, the notoriously fiery Brooks found out she'd been seen in a film by Austrian filmmaking powerhouse GW Pabst for his adaptation of a series of plays popular in Europe about a character named "Lulu". Pabst wanted her for the role despite her relative inexperience, curious especially for such a dynamic character as Lulu.  And, in Europe, even before filming began - with the character of Lulu already well known, Brooks and the character became synonymous.  90 years later in the right online circles, she's still "Lulu".**

Pandora's Box (1929) would be a phenomenal example for a film student if you wanted to demonstrate non-sci-fi levels of German Expressionism in film in a more realistic context - presaging the same in Film Noir as the 1940's got rolling.

The film is about a young woman who lives in a moral gray zone who has found herself the kept-woman of a prominent, widowed statesman.  An attempt to explain the plot of a 9 act melodrama with changing locations and cast members would take an ungodly amount of time and sound like lunacy while scraping the story free of any context, so I'd just point you to the Wikipedia entry if you feel the need to get a synopsis. Suffice it to say, it's a story of class, moral ambiguity, sexual obsession and magnetism, and the blackhole a whole cast of characters fall into around a woman who doesn't seem to understand consequence and whose Manic Pixie Dreamgirl qualities tend to land people in coffins.

I'm really underselling something that has complexity, in which our Lulu is never so much a villain as she is a force of nature, her magnetism (Lulu does not seduce, she simply exists) and its impact on other characters something that would manifest in American cinema perhaps in aspects of noir characters and the femme fatale (but at a smaller scale).  Rarely does Lulu herself plot (the same cannot be said for her hangers-on), though it's difficult to describe her as "an innocent".  But there's no question that the theme of the "evils" that are inflicted upon those around our Pandora as she wades through the world from polite society to squalor.

The version from Criterion is played at speed rather than forcing 16 fps to play on a 24 fps projector, giving you the familiar herky-jerky motion you may equate with silent film.  Instead, the movement is natural, the pacing more familiar and closer to that of film language as it would remain for decades after.  This is a lot more common these days than in the VHS-days of my youth, and I'm deeply grateful for the transition.

Because the impact of certain cinematic movements is so vast, the framing and design of so much of the film feels positively of modern media at times.  In short, the film is beautifully realized as a visual spectacle.  It may not have the scale of Metropolis or other contemporaries, but within it's indoor spaces - each of the acts of the film taking place in a relatively confined location - the film is never less than outstanding to view, and isn't hemmed in by the visual tedium of The American Shot, something our films wouldn't really part with until Citizen Kane.  I'm a sucker for dynamic use of the black & white, light and shadow, especially paired with dutch angles and creative framing, and in scene and scene, the artistry on display versus the factory nature of much of America's not-Charlie-Chaplin filmmaking of the era is so obvious.  But, again, I'm no silent film scholar, so feel free to slap me for this if I'm wrong.

While I may be more used to the wide-gesture acting of, say, Phantom of the Opera, as a silent, Pabst's characters move naturally, and there's a believability to many of the performances I found surprising - but, hey, this is Weimar Germany.  They were doing things differently than a bunch of vaudeville refugees in LA.

Brooks herself is devoid of stagey, vaudevillian acting - but she's better here than in Beggars of Life where she plays younger than she is and mostly the scared girl on the run.  She lives best in the close-up, but her movements are unstudied and predict what would come once the silent era miming would come to an end.  Lulu may not actively pursue new lovers - they come to her - but she's also not a block of granite - she's a dancer when it suits her needs.  She has feelings and a temper and can't quite put together why people react the way they do around her or why she can't have what she wants.

Frankly, she feels familiar as a person, someone you knew in your younger days that you could see as a jar of nitroglycerin and you'd see others wanting to handle it despite your suggestion "this things gonna blow your hands off".

If anything rings false, it's the final acts in London which while narratively and from a "morals" standing probably satisfied some portion of the audience, but also show Lulu making a choice to help those around her and things going south.  Penniless and hungry on Christmas Eve, she turns to prostitution to put food on the table for herself, her "father", and her now useless former-socialite lover.  And, as is heavily telegraphed, she's murdered.  By someone I think is supposed to be Jack the Ripper.

While I don't know I was ready for 6 more acts of Lulu's next phase, the tragedy of the selfless act, set against the merriment of Christmas in London, is something to see.  But feels more like a poetic finale than anything.  I liked it, but it did have an off ringing of artifice and reminder of the source material as stage play from a certain time and place closer to Threepenny Opera.

The movie is absolutely worth a viewing if you're set for a silent film, from the lush design to seeing one of the three-film cycle of Brooks in Europe (and before her disastrous return to the US).  And it's a reminder of the complexity of the films and storytelling in an era where dialog was limited to title cards and so much was conveyed in intention and expression, bringing together actors who, in reality, shared no cultural background, but whom could appear to be of a singular time and place.


*I can absolutely do it - but I need to go ahead and set aside time where I will not have my phone or computer around and I'm in the right mindset.  Honestly, it's easiest in theaters, but not so many of them show silent film.  But once I'm in, I'm in, just like any movie.

**I've only seen The Plastic Age and Beggars of Life from Brooks' pre-European days, and she's terrific especially in Beggars of Life.
Posted by The League at 6/14/2019 11:10:00 AM