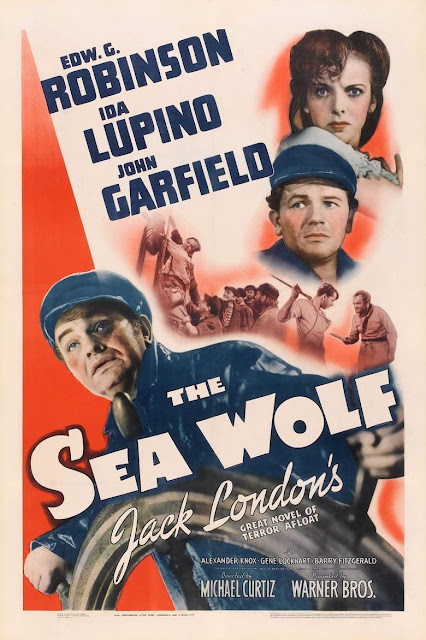 For some reason folks try to file this movie under "noir", and... maybe...?  But I'm going to just go ahead and say "drama".  I'm not willing to do mental the work to turn a Jack London story on a boat into a noir.

I actually broke one of my own rules and purchased this BluRay a couple of months ago having had never seen the movie.  Honestly, I looked at the starring names, looked at the source material and the name of the director and figured "I've spent money on far worse films".

A wildly timely movie - perhaps depressingly so - as the original story by novelist Jack London was adapted to reflect the times.  A man on the run played by John Garfield joins up with a ship (agreeing after almost getting shanghied).  Meanwhile, an escaped convict (Lupino) is hiding on a ferry to San Francisco when it's struck by a steamship.  She and a writer (Knox) are rescued by the crew of The Ghost, but with no intention of setting them back to land.  The Ghost is a 1900-era pirate ship, and those aboard are a crew of the worst of society, who hate themselves almost as much as they hate each other (and assume the worst in everyone).


The Captain is Wolf Larsen (Robinson) who can play them like the fiddle, keeping power through humiliation, strong-arming, fear and  degradation - no man wanting to be next, but all happy to slug the next man to curry favor and get a leg up.  Larsen himself is no dumb brute, he's smart enough to know what he doesn't have and with whom he's surrounded - and to enjoy it.

The writer, forced into service as a Cabin Boy, finds a copy of Paradise Lost open, the passage underlined:

Here at least
we shall be free; the Almighty hath not built
Here for his envy, will not drive us hence:
Here we may reign secure, and in my choice
to reign is worth ambition though in Hell:
Better to reign in Hell, than serve in Heaven.

The writer himself has written lines about his new captain, found and given over.  Larsen finds the writer's take on him fascinating, and rather than striking him down, encourages him, believing any literary depiction will validate him.

Meanwhile, Leach (Garfield) begins to fight back, showing a will no one counted on, as Lupino watches in horror, taking her own life as good an option as any.

As you all know, I'm in the bag for all things Ida Lupino, and I'll argue this role is an interesting pairing with High Sierra and, really, a lot of what she'd take on elsewhere as a woman whose only prospects are bad and worse.  Beyond Lupino this film contains an amazing roster of great talent.  John Garfield, Edward G. Robinson, Alexander Knox (The Longest Day), Gene Lockhart (Miracle on 34th Street), Barry Fitzgerlad (The Quiet Man), and even Howard Da Silva behind a beard (I didn't recognize him until he started talking).  It's a hell of a lot of talent crammed into one movie in front of the lens.

Part of why I picked up the BluRay is that Michael Curtiz is just an astonishingly solid director across genres.  The closest we've had in our generation might be Spielberg, but even that doesn't do him justice.  His IMDB is a reminder of the frantic pace of the studio system, and still he's turning out movies like Casablanca, The Sea Hawk, The Adventures of Robin Hood, Mildred Piece, White Christmas...  I mean...   I may really like Siodmak and Fritz Lang, but the sheer variety of stuff he was doing is astonishing.  I'm sure not all of it was perfect - I've only seen a fraction of it, but...  And here, he's doing something incredibly difficult with character and story that doesn't really resemble anything else here.

A large portion of the credit has to be tipped to screenwriter Robert Rossen, who also did curiosities like The Strange Love of Martha Ivers (recommended, if you've never seen it), and The Roaring Twenties, both of which struggle with difficult, corrupt people who are still shown with tremendous depth, much as we find Robinson's lead character.

Likewise, I'd want to acknowledge Sol Polito, whose work on the film as DP is outstanding and the Oscar-nominated work of Byron Haskins.  Ships can be tricky as a set, but Polito's eye and lighting and working with a moving camera and/ or set to keep the feel of a boat, constantly in motion, is terrific stuff.  Haskins' work to create a convincing illusion of a ship at sea is similarly terrific.

As I said to Jamie "this movie is very much in my wheelhouse right now".  Frankly, I found it an astute and fascinating film.  A modern remake would spark heated debate, which is always fascinating when you're adapting a book that's been in print for decades.

It's not an easy ride of a movie, but well worth the watch.

On a final note - it seems that for some number of years, the only available cut was an 87 minute version that had been a trimmed-down version to be shown in re-release with Curtiz's The Sea Hawk (a straight up pirate movie with Errol Flynn).   In the past few years John Garfield's 16mm copy was surfaced in an archive, and when WB found a 35mm copy at the MOMA, they went ahead and had that restored.  Do look for the full 100 minute version, if you can find it.
Posted by The League at 6/22/2019 03:15:00 PM