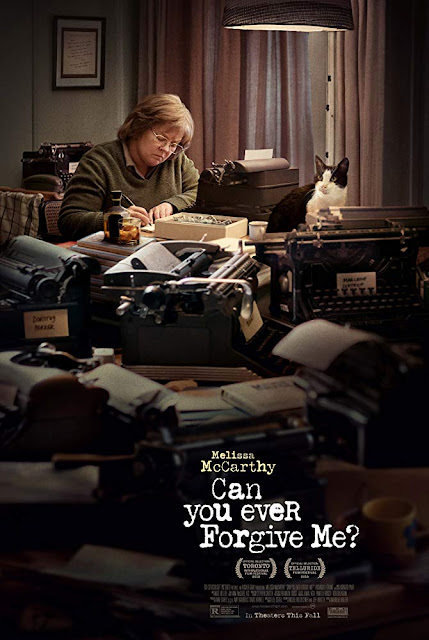 I wouldn't say this movie was mismarketed, exactly.  But how reviews I read described it made it sound exceedingly joyless, but interesting.  The premise held enough promise that I planned to get to it eventually, but wasn't in a mad dash to do so.  However, Jamie watched it somewhere along the line when I was off at a breakdance party or whatever I do, and informed me it was very much in my wheelhouse, and, indeed, she was correct.

Can You Ever Forgive Me? (2018) is the true story of Lee Israel, an NYC based writer of bios of celebs of bygone eras (she's working on a Fanny Brice book during the movie's circa 1991 timeframe), which don't really sell, so she tries to hold copy-editing positions, etc...  to pay the bills.  But as a caustic, misanthropic drunk, turns out holding a job can be tough.

She becomes re-acquainted with a down-on-his luck bon vivant, played by the always-amazing Richard E. Grant (a charming drunk, here), just about the time she has some bills due (cat gets sick), and has to make some money, quick.  Through a series of small discoveries, she learns of the world of memorabilia and letter collectors, and begins forging letters supposedly penned by luminaries long since passed, including everyone from Noel Coward to Louise Brooks.

Melissa McCarthy stars as Israel, and it's not exactly a revelation to see her this good - I think she's kinda brilliant as a comic actor, so seeing what she can do with a dramatic part was a "well, sure" revelation.  She's always been so specific, with undercurrents and layers of sympathy, pathos, and thoughtfulness, even in goofy stuff like The Heat (which I really enjoy, y'all), doing same but for a dramatic role makes sense.  And, it seems, the work done here by she and Grant earned them both Oscar nods.*

Because the arc of the film is fairly obvious, I'll refrain from spoilers.  Instead, I'll just tip my hat to the actual technical work, character work, and script.  Director Marielle Heller has a sparse directing and acting filmography, but seems to know how to get a performance, and I'm now doubly interested in the A Beautiful Day in the Neighborhood Mr. Rogers biopic coming, as she's the one wearing the puffy director's pants there, too.

I also quite liked the DP work by Brandon Trost, and almost laughed out loud seeing this is the same DP as the Crank movies, which I'll just let all of us ponder if we think we ever have someone's style nailed down.

Anyhoo... I'm just recommending this one.  Give it a go.


*which... honestly, we should be expecting movies with these levels of performance in movies all the time, but that's reserved for TV these days.
Posted by The League at 9/14/2019 10:56:00 AM

Tell me more about these "breakdance" parties