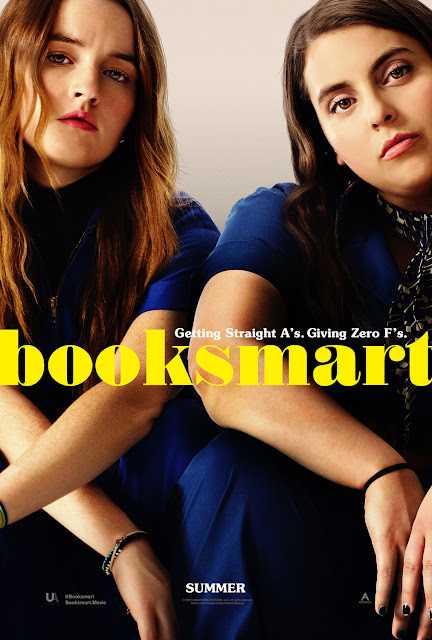 I'd had a few trusted sources go to the mat for this one and been interested in seeing it when it was out, but... didn't.  A few blunt points on the movie:  in many ways, this movie is very, very familiar as a high school comedy about privileged kids and has a lot in common with movies that get routinely dismissed as dumb comedies.

But, sometimes it's about the execution.


Further, I've always taken exception to the notion that movies as goofy as Superbad (the arguable breakout hit for Jonah Hill, whose sister Beanie Feldstein stars in this movie) are just disposable gross-out comedies.  Frankly, those movies are often the movies we see more of ourselves in than, say, Out of Africa (I mean, unless you ran a plantation, romanticized African colonization and hooked up with Robert Redford, in which case, I mean, I am sure you feel seen).  It may be a heightened reality - but then again, so is high school.

Unlike many of these comedies, this one is centered on two young women - nerd girls at that - who come to the startling realization on their final day of high school, that all of their posturing and self-denial in their K-12 school career that kept them from partying or hanging out with a circle larger than two, didn't get them anything special.

Frankly, I'm going to argue you need to get past two things to get into the movie, because I had a very, very hard time with the first ten minutes.  The movie takes place on "the last day of Senior Year", but has no idea what that actually looks like.  In order to set up characters and situations, it honestly feels more like the first day of Senior Year to the point where I asked Jamie to pause the movie because I didn't understand what was happening.

The big set up for the rest of the film is when our focal characters learn that all of their sacrifice for academic excellence which has led to admittance to elite schools and belief that they're moving on from this point in their life and leaving all the losers behind as they ditch Southern California for Yale and Columbia is shattered when Beanie Feldstein's character learns her dipshitty classmates are also going to Yale.  And Stanford.  And skipping college to code for Google.  It's intended as a heart sinking moment of realization, and it is - and God knows I remember realizing some of the people I took for morons in high school must have not been idiots rang true.  But...

One, this requires the near fantasy movie set up where the students all follow an honor code where they do not talk about where they're going after high school for college.  Like, high school movies work because there's a certain universal experience most of the audience will share - and maybe kids really are this well behaved these days, but...  bullshit.  Two, every once in a while you get a movie that reminds you of the very small and very privileged elite circles that much of Hollywood comes from.  Like, as an exec, one would think "beyond the joke, does this story point actually *work*?.   I guess it makes more sense if you went to prep school or Hollywood High and, as is suggested at the end of the movie, everyone in the class of 2019 from this school is *going* to college.  Let alone "we're all going to Harvard and Stanford and Yale".  I know they put Beanie Feldstein's character in an apartment to show she's from a family with less money - but it just felt really... weird.   Especially as the movie never addresses what actually drives Molly.*

The good news is, beyond the set-up, if you set your expectations at Superbad levels, this movie works really, really well.  It's genuinely very funny and will be loved for what it was to a generation of high school kids coming through now, just as countless high school movies have spoken to and served the same purpose for the kids who graduated with their own movies.  Kaitlyn Dever as Amy is as natural an actor and comic actor as you're like to find, and utterly buyable in her role.  The more hyper-real character of Molly (Feldstein) is the kinetic energy needed to keep the movie rolling.  Either would be fine as stand-alone characters having a solo adventure for the evening as they decide to attend their first high school party the night before graduation to make up for lost time.  But together it's some great chemistry.

It's a fairly typical "high schoolers wander around a not-dangerous suburb over the course of one night and then there's a party" which we've seen no small number of times since American Graffiti.  At this point, it's sort of about (a) how good are your leads and (b) what spin can you put on this we haven't seen before?  And, as I say, it's therefore about execution.

The movie is at it's best when it's at it's silliest - but the movie also works and feels sincere because of the grounding in the two main characters, and opens things up for goofier stereotypes or weirdos.  I think Billie Lourd wins the day with Gigi, who could have been a terrible character or just obnoxious.  The character bits where we break down assumptions and stereotypes between characters as they get to know each other are elevated through knowing nods to how this would have gone in a movie 15 years ago and not letting themselves fall into that trap.  Even if the characters sound 27 and not 18.

Sure, there is a world I do not get about modern high school life that's somewhat reflected in the movie, but enough doesn't change (I pointed out to Jamie that we're 3 years off from our 30th class reunion date - no, I will not attend - and we shared a mutual whistful sigh).  But in the ensuing years since I got my HS diploma, it's also interesting to see a movie with a major out character, and see at least one high school, where this isn't a particularly big deal.  As, I understand, this is more or less actually true in many American high schools these days.

For a feature directorial debut, Olivia Wilde knocked it out of the park.  There's a full understanding of how to get a performance out of *everyone*, and the handling of scenes which could have been rote is heightened with terrific detail and work with the DP.  For a movie I started off thinking I may not actually want to finish, this movie won me over.  But a quick glance at Wilde's IMDB bio may explain how she was blind to some of the 1% issues baked into the film.

In the words of 10 years ago:  check your privilege, movie.

Post Script:  I just saw the Spanish title for this movie is La Noche de Las Nerds, which, I mean, on the nose, Spanish-speaking marketing team.

*full disclosure: I now work in college admissions, and college admissions is a deeply painful process for everyone involved.  I've had chance to see some prospect's true-life situations as they reach for college, and, holy shit, guys.  There's some brave as hell kids out there.
Posted by The League at 4/19/2020 12:46:00 PM