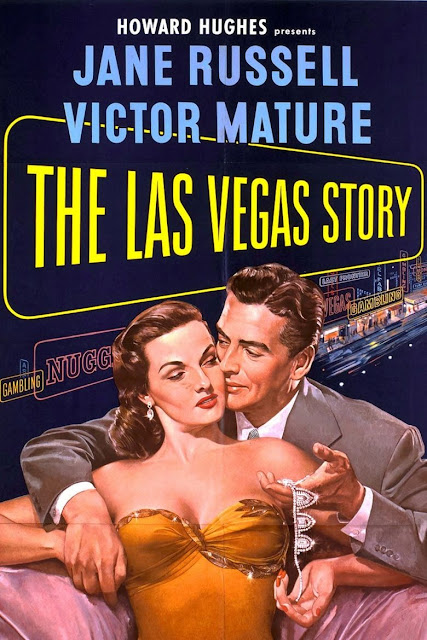 Pivoting from the exotic locale of Macao to the oasis in the desert that is Las Vegas, Nevada, Jane Russell drops Mitchum and picks up Victor Mature, Vincent Price and "the guy who will be a bad guy", Brad Dexter.


Russell plays a former Vegas chanteuse who once had a firey thing with Victor Mature when he was a soldier stationed outside Vegas.  It ended with a lot of questions for them both, but now she's returning with her financier husband, Vincent Price, stopping over in Vegas on their way to Los Angeles from Boston.  It's Hughes-era RKO, and you can feel it in the movie, from the constant comments about Russell's figure to the seedy storyline that pushes some Hays-era items right up to the line. 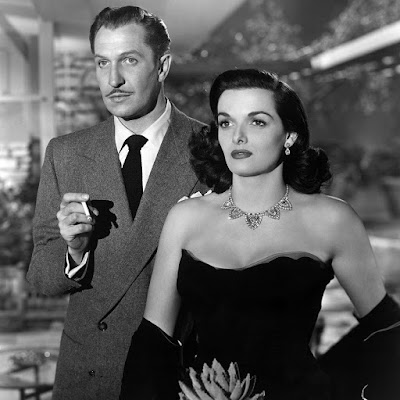 Turns out Vincent Price is having money trouble and the $100K necklace around Russell's pretty neck and a streak of good luck at the Craps tables could resolve the issues.  This is a less jolly Price, but still a fantastic one, his ability to threaten while smiling and turn from certainty to panic with barely a change of expression at full power here.  Russell, meanwhile, is haunted by her old haunts and returns to the saloon where she once performed alongside Hoagy Carmichael.  Memories of her affair with Mature more or less manifest him - he's now a Lieutenant with the Clark County Sherriff's department.

No sooner do the two meet again than the old fires rekindle.  Which, to my surprise, leads to the direct insinuation of extra-marital sex on behalf of our leads.  There's actually some pretty great scenes between Russell and Mature as they also remember the bad-old-times, too, and you get Russell's tough-girl side on full display.

Dexter plays an insurance man with an angle for the jewels for himself and maybe securing Russell in the bargain - leading to the movie's climactic chase (which includes a helicopter!).  It's hard to peg as a "great" movie, but it delivers on what it's trying to do, has some decent twists and turns, and if you kinda like Hoagy Carmichael, it's got lots of that guy. Including pausing for this number:

I'm just a fan of a lot of this cast - so it's just fun to see them in a story like this one that has enough twists and turns to keep you going.  I don't think it's actually noir - the cop is straightlaced and remains that way, minus maybe chasing a married woman, but he never is exactly on the wrong side of the law or doing anything out of an irrational obsession.*  There's some good supporting players, including Jay C. Flippen as the Captain.  All in all, not a movie vying for an AFI 100 list, but it's got it's moments and does feel elevated by some risky story elements and everyone clicking on screen.