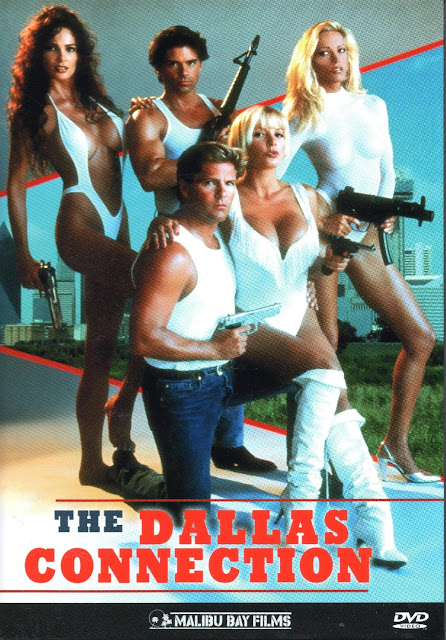 
Uh...  the plot.  "Telling a story that means something" is not the mission statement of this film's producers.  But the story gets weirdly complex for what the movie is trying to achieve and not *that* different from a standard actioner of the era.  Scientists working on a four part algorithm that, when brought together, something space laser? - anyway, they start getting killed by sexy assassins.  With only one scientist left, The Agency sends its top people to Dallas where the last scientist is set to deplane as he arrives from?  Rio?  Sure.  why not.  The others were from South Africa (a Dallas area ranch), Hong Kong (a golf course I think was in Louisiana), and Paris (a McMansion outside of Dallas).

If you have never been to Dallas and wondered: is Dallas beautiful?  This movie is here to definitively inform you:  No.  Dallas is bizarre and ugly.  And it was especially so from the 70's to the early 00's.  But I guess it was cheap to film there (Andy Sidaris of Malibu Films went to SMU, so I assume there are Texas ties).

The movie stars varying levels of "b-movie"/porn-stars, anchored by all 6'1" of Julie Strain playing "The Black Widow".*  The maybe-adult-film actresses play a cadre of assassins, killing off our scientists and convening in Dallas at a club that cannot figure out if it's a Country bar or strip joint (it is a country bar, and everything about them suggesting otherwise is awkward).

I'll be honest, I didn't really watch this film, so much as looked up occasionally while it was on.  I know some guys had a Corvette, a race car and a jet ski.  And at some point the scientist goes all the way to Louisiana for a horse race while under federal protection (that's a 3 hour drive each way).

All in all, it's weirdly plot heavy for what it is, but still manages to land the acting of late night Cinemax, with less proportions of what one is accustomed with Cinemax.  It's more fascinating to watch in a "wow, okay..." sort of way than anything else.  They're not *trying* to make a good movie, but they are trying to keep you watching.  And suddenly you realize you're watching the cilmactic firefight, and say "oh, I guess this is wrapping up".  And then it ends.


*Strain made both B movies and Cinemax-level softcore, married one of the guys who made up the Teenage Mutant Ninja Turtles for a while, and is now kind of AWOL in pop culture.  The internet suggests Strain is actually not well after an accident, so we wish her well.  But for a window there, a lot of people knew who she was in the 90's/ 00's when b-movies almost went mainstream with actresses sometimes crossing over.
Posted by The League at 6/03/2020 11:52:00 PM