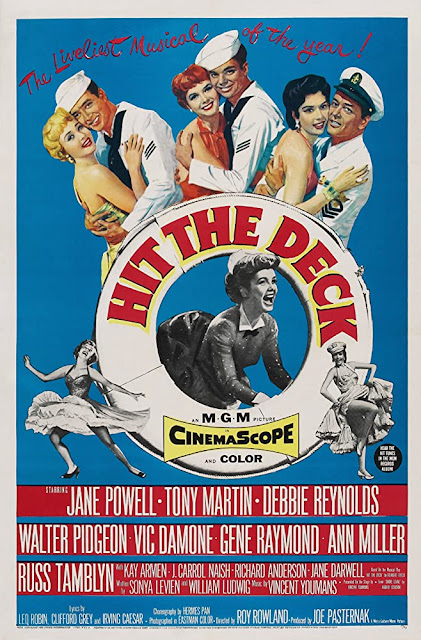 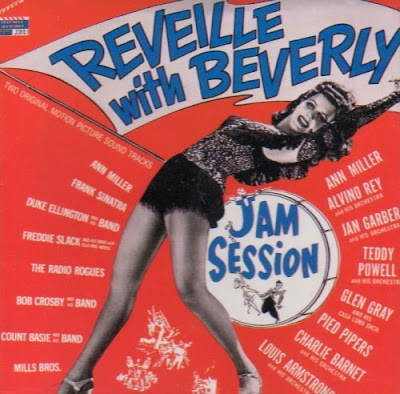 
Look, I've been clear about the whole Ann Miller thing, and I'm not going to apologize for it.

It's August, and therefore "Summer Under the Stars" time on TCM, which means 24 hours of movies from one actor each day all month.  And this last week featured Ann Miller day, and here we all are.

Hit the Deck (1955) is pretty clearly a "I like Guys and Dolls" and "wow, was On the Town a decent movie" mash-up.  I dunno.  It was fine.  Little Debbie Reynolds is cute as a button.  Ann Miller got a couple of numbers.  It's okay.  It has a lot of deeply sexist set-up that kind of unravels in a pleasant way and has a great few numbers by the women in the movie.  And it's always great to see Russ Tamblyn.  And I need to look into this Kay Armen.  She was terrific.

Reveille with Beverly (1943) is war-time spirit-boosting propaganda and was one of the movies that was essentially an excuse to do a musical variety show with everyone from Duke Ellington to Bob Crosby.  Ann Miller plays a feisty and insanely perky radio host.  The film, however, ends on a very strange pivot as they remind you, all the soldiers are going off to war - and it was this odd, incredibly sad transition, with Beverly still in her show costume watching them go.

The Great American Pastime (1956) is a post-war movie trying to recapture some of the magic of Seven-Year Itch and reminding me "I don't particularly care for Tom Ewell".   What could have been a Bad News Bears instead is kind of a sitcom dad who seems oblivious to the fact he's married to Anne Francis and that Anne Francis has decided Ann Miller is a sexual threat (she is not, which...  I mean).  Anyway - the movie felt really under-written and I kind of hated the way they wrote Tom Ewell's son.  Seemed like a dopey ingrate.