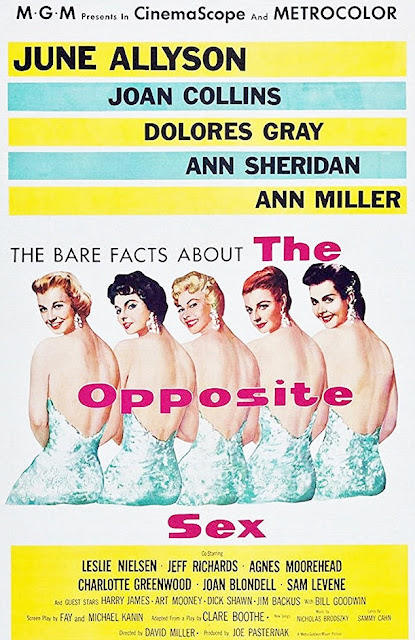 
This is essentially a remake of The Women (1939), still rightfully hailed as a Hollywood classic.

I dunno.  The Opposite Sex (1956) is somehow more dated than its 1939 counterpart, although both take place in Manhattan's society page sort of environment.  The real reason to watch this one is probably to see a movie so chock full of "oh, wow, she's in this" actresses of the era.

and two of the main dudes in the movie are Leslie Nielsen (back when he was straight leading man material) and a favorite around here: Sam Levene.

I don't think *any* men appear in The Women, they're just discussed.  And it's arguable both films fail the Bechdel Test, despite the female centric casts- but they do give a curious bit of insight into the topsy turvy world of wealthy women dependent on men, alimony, and bouncing back over and over - in both good and mercenary ways.

Frankly, it doesn't make anyone look *great*, but it is silly and dishy, and goes by fast.

I didn't particularly like this movie, but Ann Miller looked stellar.  But she wasn't in it enough for my dollar, so.