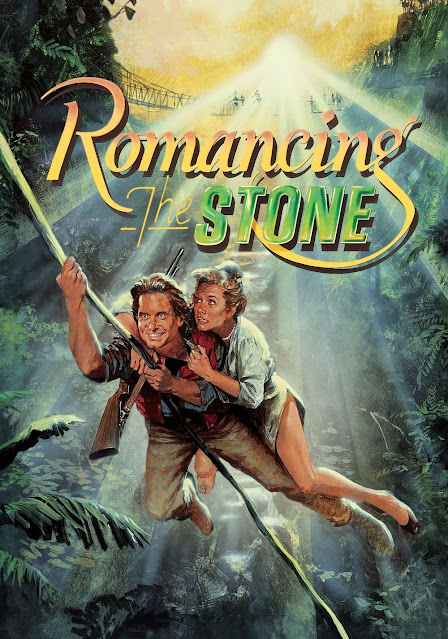 Watched: 12/30/2020
Format:  Amazon Streaming
Viewing:  Unknown
Decade:  1980's
Director:  Apparently, Robert Zemeckis
As a kid, I have two memories of this movie - 1) I think my parents thought itw as going to be risque, because the first time we watched Romacing the Stone (1984) it was with some family friends who had to tell them it was okay for 9 year old me, and 2) when I watched it again later - running on HBO or whatever, it just made me wish I'd rather be watching an Indiana Jones movie.
I was, of course, not tuned in at all to what the movie was doing.  I had so clearly missed the point watching this as a kid, that five minutes into it this time (and I don't know if I'd seen this movie since I was 20), I turned to Jamie and said "I don't think I ever realized before that Kathleen Turner is supposed to be a nebbish.  I thought the idea was that she was a fancy lady from New York out of her element."
So, yeah - TOTALLY missed the point as a kid.
Look, Romancing the Stone was not and is not aimed at me, and I still generally like it for what it is.  It's well paced, has some genuinely funny bits, etc...  But you kind of forget what Michael Douglas is like when he turns Michael Douglas-ness up to 11.  And it's a lot.  But people loved that in the mid-80's, I guess.  It's like he took his dad's hammier moments, distilled them and soaked in them.
But then you see Michael Douglas interviewed, and you say "oh, wow, this is what he's just like.  Apparently this is just how all Douglases are."
Anyway.
I far more appreciate *now* what this movie was doing, and what the movie did to comment on itself or at least the idea that you need a big, strong man - and weirdly the movie gets to eat its cake and have it, too, by not making Jack an irredeemable putz, which I suspect was the first draft, and instead just letting Joan Wilder save herself in the end.  Which - way to go, movie.
I am unsure how to write about this or even if its necessary given how much it was wrtten about during this era (we had a subscription to People magazine, I was aware of some celeb chatter and how they were discussed).  But, my god, Kathleen Turner is, in the parlance of our times, a total smokeshow.
Yes, yes.  She's an excellent actor and I'd never argue that, but...  jinkies.
Anyway - as an artifact of the 1980's, its kind of interesting.  By 1984, Colombia was in its second decade of slow burn civil war and was in American headlines, but also was considered a source of drugs into the US.  There's no particular reason it was selected as a location that I can figure, other than that in 1984 the name rang a bell with Americans.
But, man, there's also so many 80's items in the film - from "awkward travel" to the deal with Jack's dream of a sailboat manifested in a picture.  Like, dude, just have a good speech about wanting a sailboat.  Pretty much the whole character played by DeVito is a leftover from some earlier era that ossified in 1980's movies, and paired with his cousin Ira...  it's a lot these days.  Their dialog is... not great.
It does feel deeply derivative, but that's the point, I think.  Which, I saw one contemporary review that seemed to miss "that's the point".  But I'm also not sure the movie makes enough of its flowering of Joan Wilder on her adventure and burgeoning romance with Jack to really make her arc the focus - it does get lost in the "adventure" aspect of the film, which isn't particularly unique enough to hold up under the strain.
Still, people were apeshit for this movie when it came out.  So what do I know?
I'll give a lot of credit to Zemeckis, who keeps the movie going fast and hard enough, and keeps the tone just right throughout - that, as Jamie said when itw as over - even if it's not your thing, it's still entertaining.  And it is.  I just wish they'd made a bit more of Joan's growth other than literally letting her hair down.
Posted by The League at 12/31/2020 02:10:00 PM