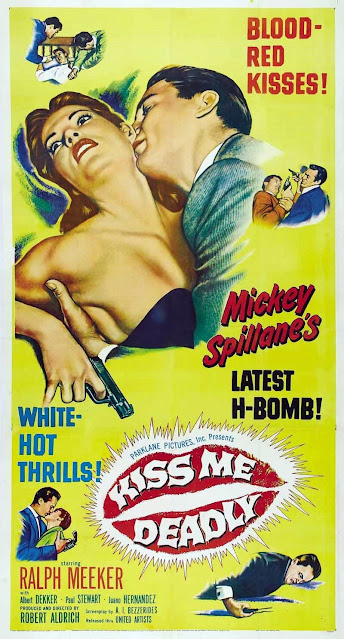 Watched:  12/6/2020
Format:  TCM on Noir Alley
Viewing:  third?
Decade:  1950's
Director:  Robert Aldrich
Mickey Spillane is a weird sell in crime and noir circles.  I've never read any of his books (I'm fixing that ASAP), but the general idea is that his detective novels featuring Mike Hammer are (more) sexist (than other noir) and sadistic.  That's spilled over to the Mike Hammer films and other media, most of which I haven't seen or paid much attention to - but Kiss Me Deadly (1955) is a @#$%ing crazy movie, and you should check it out sometime.
It's different from a Marlowe film - Marlowe doesn't smack people around to get info or just out of frustration - Ralph Meekers' Hammer is a guy trying to remain civilized when he very well knows what he's capable of in a corner.  He doesn't give speeches or moralize in this movie - he loses his shit.  And he makes colossal mistakes.  But he also wins fist fights, and he doesn't like a lot of bull.  He's also a pal to his friends - in this film (in 1955!) that includes immigrants and African Americans.  He gets mad when things happen to them.
The film features the first cinematic appearance of Cloris Leachman - and while briefly in the film, she's phenomenal - making an impression like shattering glass.  You'd have no idea this was her first role, and she reverberates through the entire rest of the film, not just haunting Mike but the viewer.  The plot hinges on the audience caring about Leachman's character, and Leachman makes it happen in a few short scenes.
Her character appears in the first minute of the film, naked except for a trenchcoat, flagging down Mike Hammer on a stretch of dark highway.  They're both taken, and Leachman's character is killed while the murderers try to make it seem like the pair died in a car accident - which Hammer survives.  Then, it's all about finding out what happened and why.
It's a curious film, playing in the dirt and grime - we learn Mike's usual business as a PI is sustained through divorce cases, and both he and his secretary, Velda (Maxine Cooper), use themselves as entrapment to lure wayward spouses and collect evidence.  And in the thick of things, the characters (and therefore the movie) aren't afraid to indulge in a bit of "what does it all mean?" existentialism to ponder why they're doing what they do, with Velda getting her own speeches.
Cooper's approach to Velda is surprisingly... incendiary.  She's on fire for Mike, maybe because of his flaws as much as in spite of them.  And because you definitely get the feeling Mike does care about her - but it's nothing like the fire she's got that's got her doing things maybe she shouldn't.  She's too smart and maybe cultured for whatever is going on in the offices of Mike Hammer, but here she is.
Rounding out the major female supporting cast, Lily - played by Gaby Rodgers as a manic pixie nightmare girl.
There's a dozen or so other supporting bits, including Jack Elam and Jack Lambert as heavies, Nick Dennis as a pal, Wesley Addy as Lt. Pat Murphy of LAPD trying to sort out what's happening with Hammer.
Anyway - stick with the film.  It's got a hell of an ending.
Posted by The League at 12/06/2020 11:44:00 PM