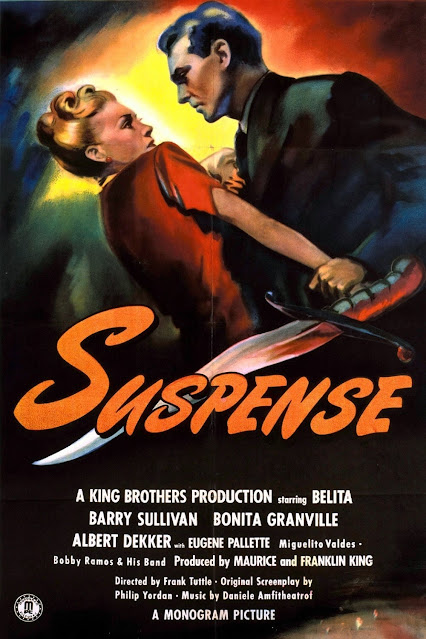 Watched:  12/7/2020
Format:  Noir Alley on TCM
Viewing:  First
Decade:  1940's
Director:  Frank Tuttle
Jamie is not averse to noir, but I watch most of these by myself.  However, when I pitched her "it's a noir with figure skating as a key component", she was in.  She loves her some figure skating.
This is the third Belita-starring film shown on TCM's Noir Alley - and I'd guess the last.  She just didn't make many movies, let alone moody crime films.  I totally get why Eddie seems to have a soft spot for her - she's not exactly a powerhouse actress, but she does have a certain charm stemming from her own surprise at being in movies.
I'm mostly familiar with the King Brothers - producers on this one - from their movie Gun Crazy, part of my personal canon.   This was a follow up, and Monogram (who I mostly think of as having sets that look like high school play sets) upped the budget and talent.  Barry Sullivan stars as a hoodlum who lucks his way into a low level job at an ice-capades-type-show, and then parlays that into swiftly moving up the ranks as an ideas man - so they keep the ice show fresh and bring people back.
I mean - his big idea is a sort of oval full of swords that any film masters' student would have a field day figuring the Freudian messaging of, and doesn't seem like something any insurance company would okay - but whatevs.  Because Belita actually DOES the jump between the swords.
Anyway, she's the wife of the older, mustachioed boss, and of course she feels an attraction to Barry Sullivan (because the script says to - he's not exactly Mitchum).
Death, gunplay, avalanches, a cute dog and more figure skting figure in.  Plus, a scheming ex girlfriend and Eugene Pallette, the best Grumpy Gus in movies.
It wasn't anything earth shattering, but I was pretty okay with it.  It can be hard to find a noir that Jamie wants to sit through, and I did it!  She was A-OK with this one.  But I don't think it will be easy finding more with ice skating.
Posted by The League at 12/10/2020 05:19:00 PM