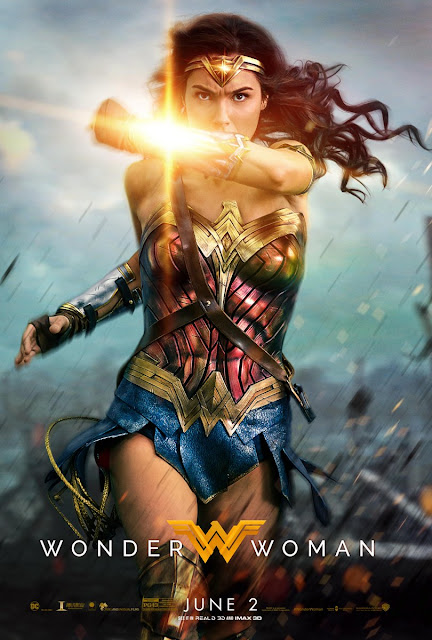 Watched:  12/23/2020
Format:  HBOMax
Viewing:  No idea
Decade:  2010's
Director:  Patty Jenkins
Every time I rewatch Wonder Woman (2017), I'm stunned at the complexity and completeness of the character arc for Diana in the film.  But here, at the end of 2020, how much Diana's illusions and how she deals with them being shattered, resonates.
From the first time I saw this movie, I know I've been saying it's one of the only superhero films to actually understand what a superhero is and what they do.  It's something comics themselves have forgotten as the writers have fallen into the traps of Hollywood script rules - and the movie itself does, in fact, play with those same rules.  But as a character, Diana is pure.  She's not out for revenge against someone who performed an injury of some sort upon her or a loved one.   She's outraged at the world of man and what they allow to occur - saying there's nothing that can be done.
For a year, we hear, the Germans and English have shot at one another from their two positions.  Misery abounds.  Diana has left her paradise island with a notion that the world outside is imperfect and needs assistance, but she leaves believing that if she slays a single figure, all will be well.  But, instead, as she heads from England to the trenches, the guts of the war have spilled out all over the table for her to see - getting progressively worse as she nears.  And at every turn, her comrades tell her "we have to keep moving, this isn't the fight."  So, finally - when she steps over the wall of the trench in red, blue and gold, facing down an opposing army - it's a response and solution to the cruelty she's seen and the voices telling her she can't do anything about it.
And, of course, in seeing her take action, others are able to fall in behind her.  The stalemate of misery ends.
But she still hangs onto her illusion of a single villain at the center of the film - and there is one.  That's one way to read it.  But Ares himself admits all he does is provide inspiration for how to make things "worse".  He does not place the idea of violence and hatred in anyone - he just makes it possible for them to escalate the misery.
There's a question of what people "deserve".  Hippolyta, heart-broken at losing Diana to Man's World  tells her they do not "deserve" her.  In a toast the expeditionary party makes, the question comes up -  "May we get what we want, and may we get what we need, but may we never get what we deserve".  It's rogueish gallows humor - but echoes back after Diana has slain Ludendorff, mistaking him for a disguised Ares and seeing the Germans have not stopped their machinations.  She's devastated, the ideas she's carried with her of a mystical sword, of a single being or source making mankind behave so monstrously is dashed hard upon the rocks of the real world.  Outraged, she questions whether the imperfect, self-destructive race of humans "deserves" help.  And, of course, Ares - revealed - reinforces the notion that humanity does not "deserve' her.
There's certainly a Nietzschean reading one can do here - do the ubermensch assist the common man?  But I think it's really a question of withholding your best self or - do you continue on with what you believe in?
Steve's early line about "doing nothing" when you see something wrong, or doing something informs his moral compass through the movie, and his role is - really - giving Diana the final push.  His willingness to sacrifice himself to prevent more death and misery is the final example he gives Diana (who, maybe, possibly, was realizing *why* he seemed to working toward a larger goal instead of correcting every injustice along the way - a pretty complex notion to bring to a movie with supergods duking it out with ball lightning) to tilt her toward Wonder Woman-ness.
Sure, I enjoy (and believe in) the motivations of that other Steve who had problems with an airplane (Mr. Rogers, if you're nasty).  But we also never really see a maturation of those ideas - at least until Winter Soldier.   Wonder Woman manages to have their big bad but also acknowledge that this is a never ending battle Diana is signing up for.   And, jesus, while I like me some Kryptonian villains - I don't love the *only* reason Clark shows up in a super suit is because he gets his ass dragged into the spotlight by his father's work-nemesis.  And I *really* hate how much he hates it by Batman v Superman.  Of *all* characters - Superman is doing this without a chip on his shoulder, even as he acknowledges the world is more complex and more difficult than we want to admit - and punching a single villain only solves so much.
Anyway - I'm thrilled that we're finally getting the sequel.  Jamie is almost hovering around the house, she's so jazzed.  I have no doubt that in the capable hands of Patty Jenkins and Co., and the oddly luminous Gal Gadot, we're all going to get a solid sequel.
Posted by The League at 12/24/2020 12:48:00 PM