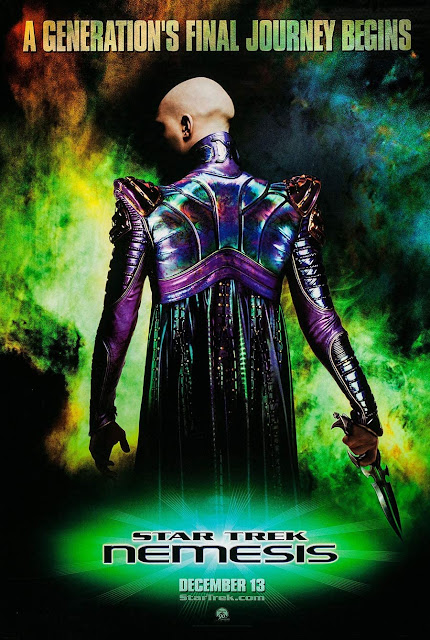 Watched:  01/06/2021
Format:  Amazon Streaming
Viewing: First
Decade:  2000's
Director:  Stuart Baird
So, this movie wasn't very good.
To be clear - all my favorite ST:TNG people are back (even Wesley Crusher), and they're all good.  The movie even co-stars a very young Tom Hardy, Ron Perlman and good ol' Dina Meyer.   But.  The very premise doesn't make a lot of sense, it weirdly includes what amounts to a rape scene of Troi (handled in the most ham-fisted and traumatizing way possible) which comes from nowhere and is seemingly there only to motivate Troi in the final reel to play Space Ouija Board to find the baddies.*
But, yeah, Star Trek: Nemesis is about off-brand Romulans and a clone of Captain Picard (Hardy) picking a fight with Picard by planting an early-model of Data on a nearby planet.  They seem to have a modestly large-sized ship that, for reasons I was not clear on, will somehow overtake all of Earth's defenses if the Enterprise crew doesn't stop them.
Along the way, there's: a jeep-chase/ fight that is CLEARLY breaking the Prime Directive in about five different ways.  A moron version of Data.  The world's most awkward coup (until today's in DC).  The crew forcing you to imagine them naked (YMMV).  Some showtunes.  A glimpse of Wesley with no explanation.  Geordi kind of hanging around.  Worf is physically present and accounted for and then... not around.
I think the movie was a reaction to the prior movie feeling too much like an extended episode of the show, so this one was like "pew pew pew in space", plus, started following movie logic of: everything needs to be deeply personal for our hero, or why would they care?  Because all action movies are made by sociopaths, guess.
I don't get where the regular Romulans were and why they seemed to have only two spaceships, or what was going on on Romulus - the planet FAMOUS for being the most deceitful place in space - that a coup attempt can include someone leaving a bomb openly on a table as they excuse themselves to powder their nose.  I am baffled how Star Treks can detect a mouse 30 feet underground from orbit, but can't figure out where a Romulan is on their ship.  And why they don't then just beam the Romulan into space so they will be less of a worry.  Or - altenratively - beam in a hand grenade next to the Romulan.  Also, why did Troi straighten her hair?  It looks great, but it looks great curly.  Girl, don't let your stylist pressure you when you've got that much natural volume.
Like - I would be MUCH better at Star Trekking than the people who made this movie.  I certainly wouldn't think "uh, the Star Trek happens to be flying by our wildly disingenuous foes, but they say now they want to kiss us.  Let's send a single ship that is trying to do other stuff and has a long history and extensive beef with the Romulans to sort out our century of fighting."
Also - I'm pretty sure Picard killed dozens of his own crew when he rammed the Enterprise nose first into the bad guys.  Like - people are working in there, sir.
I don't want to get too much into it - but, yeah, the "mind-meld rape" thing is wildly not why I show up for Trek, and Picard's refusal to let Troi have a sick day so she can remain his sounding board even as she's forced to talk about her ordeal to a room full of people was... well, it needed a total rewrite.
Anyway - it was not a good script, even when I could see the "poetic" stuff they thought they were doing with doubling and whatnot.  It doesn't really work or make sense.  And you'd think after Picard's career of seeing the weirdest and worst in known and unknown space, he'd be like "nah, you're an evil clone, and I know it when I see it, brosef."
The whole thing needed a rewrite, I guess.
Also, the movie did not have enough Dr. Crusher.  Always more Dr. Crusher.
What I did like:
This movie also needed more Spot.
I just wish it had been as bad as Star Trek V, where it just becomes funny.  Instead, it's just tedious.
*My reading tells me this plot was much more fleshed out in the original 3 hour cut.  Yes, 3 hours.  Which included way more Troi-abuse.
Posted by The League at 1/07/2021 12:38:00 AM

I've never wanted to re-watch this movie. After reading your re-review I'm going to stick with that decision.

Simon, I say this because I care: you are making the right decision