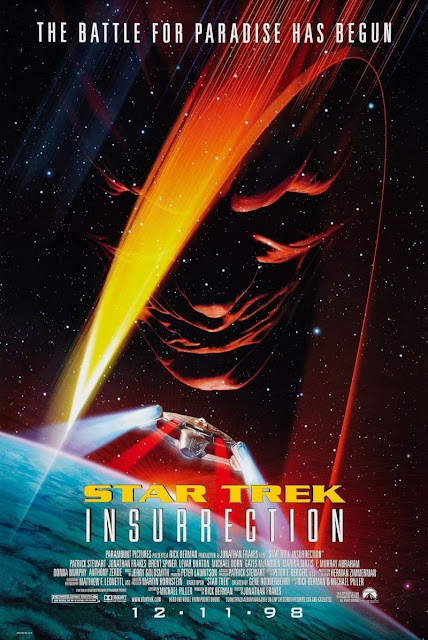 Watched:  01/03/2021
Format:  Amazon Streaming
Viewing:  Second
Decade:  1990's
Director:  Jonathan Frakes
I had mostly blocked out my prior viewing of Star Trek: Insurrection (1998), remembering it as "the one that felt like a very long episode of the show".  And, indeed, minus the movie suggesting Picard has found the love of his life (who is immediately never again discussed), the movie is more or less a stand-alone episode with some effects that are okay but never amazing.
Mostly, it feels like the cast of Trek screwing around for 45 minutes before the movie remembers it needs to get its act together and do a movie.  And even then, Gates McFadden looks like she's visibly smiling while going pew-pew-pew with a phaser rifle, like "ha ha!  They're letting me do stuff!"
So, things I liked:
But mostly the movie itself doesn't make much sense and goes to some extraordinary script-lengths to create their scenario that is wildly hand-wavy.  But Trek fans should check the set up that leads to the titular "insurrection" as a reminder of how horribly run Starfleet is during Next Generation episodes.  It was a weird staple of ST:TNG that Starfleet was consistently making horrible decisions that Picard would need to rebel against like a cool teen showing up the stuffy principal that of course it made it into a movie.*  I understand a Star Fleet is a tough thing to run, but maybe by the 10th tribunal where Picard is having to do his best Perry Mason, check the man's service record, remember he has no particular reason to be a Romulan agent, and stop threatening to disassemble Troi or whatever they're doing that week.
Anyway - this is a very weird, very obviously inexpensively made era of Trek-movie, and while I am thrilled the cast is having fun, this whole movie needed a lot more workshopping at the script level than anything else.
One day they will make a Trek-show where the Captain is not constantly the point man on every dangerous operation, but this movie is not that.  And Ryker flies the Enterpise by joystick AGAIN.
A final note - the movie casts Broadway darling Donna Murphy as Picard's love interest, a 300-year-old alien living on a planet that seemingly will keep her young and rejuvenated forever (she has an action figure and everything!).  Doesn't let her sing or anything.  She has a lot of TV credits, and was coming off doing a stint on the briefly popular Murder One.   But she is actually very solid on a show that I usually just take for granted "look, the lines are nonsense, so if we get 'wooden' as a performance, that's a win sometimes."
But I strongly suspect I'll immediately forget this movie again, because it makes very little sense.
*So, yeah, next time you're complaining about Picard and saying "Picard would never quit the Federation!  I don't like New Trek", remember the approximately 52 episodes of the show where someone in a bathrobe showed up and Starfleet decided the Enterpise needed to be shutdown or whatever.   Sooner or later, you take your pension and go drink in France.
Posted by The League at 1/03/2021 11:13:00 PM