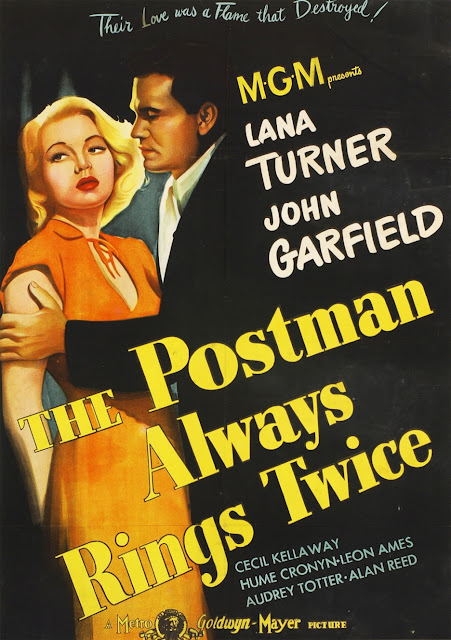 Watched:  02/06/2021
Format:  TCM on DVR
Viewing:  unknown
Decade:  1940's
Director:  Tay Garnett
The Postman Always Rings Twice (1946) is among the top ten films I'd recommend in a "what you need to know about noir" seminar.  It's got an earned place among the noir canon, and even though I've read the book and seen it half-dozen times, I find myself thoroughly enjoying every time I return to it.  It simply works.
It shares a certain headspace with Double Indemnity, which makes sense as both started as novels by James M. Cain.  There's not just a gritty realism in how characters are and behave, it's matched by the worlds Cain created that seem not far off from our own.  Roadside diners, insurance offices.  Heck, throw in Mildred Pierce and you're in the suburbs and building up comfortable eateries.
All it really takes is infatuation to become an obsession, and everything can go off the rails.
The Postman Always Rings Twice is a curious entry in the noir pantheon as - while the characters do perform murder to get what they want, they actually do love one another, right up to the bitter end.  I think it *starts* as infatuation, but they're some misshapen soul mates, kind of a ying and yang, interlocking.  Cora (Lana Turner, scintillating in white) is the femme fatale only by accident - she's not an agent of chaos, she's got clearly stated goals for herself, and they're noble, she's just making bad decisions to reach them - even well before Frank (John Garfield) wanders into the Twin Oaks.  Garfield died too young and with too few movies under his belt to be a household name, but his street-brawler charm versus Turner's scarred-but-smarter girl who had the misfortune of growing up gorgeous (no, really) persona is a hell of a pairing.
In some ways, yeah, it's a reminder that maybe Double Indemnity has possibly too much in common with this film - they both feature bombshells getting a guy to bump off the husband - but in this film, Cora is far more sympathetic, and Frank isn't doing it because he thinks he's smarter than everyone else.  They're literally desperate.  In some ways it's an inverted reflection of the other film.
But at the end of the day, a *lot* of noir plays on similar themes, so it's really the performances and execution that sell it, and there's nothing in this movie that doesn't work.  These characters are *trying* to do the right thing, except when they aren't or can't help themselves.  Cora knows Frank is a bad idea and resists.  Frank knows sticking around is going to end him, but he does.  The stutter steps and mistakes along the way as they try to figure their way out is a reminder that these characters aren't heels, and unlike, say, Double Indemnity, you aren't just enjoying watching two awful people up the stakes with each other (an oversimplification, but work with me).
Lana Turner is mostly (and understandably) remembered first for her appearance, and maybe secondly for her rocky personal life.  But this movie also marked a professional change for her - where, on screen, she goes from figure of objectification to a fully realized character.  There's already two meanings as she spits out the line "Oh, no! You've been trying to make a tramp out of me ever since you've known me."  It's possible to layer on an unintended third.  I adore that they dressed her in white in the film, and her hair dyed to show at the same radiance - always a burst in the black and white monochrome that lights up the screen and the attention of the viewer, just as she draws Frank to her.  It's a hell of a visual trick I think I'd only seen in a monster movie or two with white gowns against the dark.
With a supporting cast that includes Leon Ames, Cecil Kellaway and the always terrific Hume Cronyn - that would be more than enough.  But it also marks both one of the first credited roles for Audrey Totter as a woman who draws Frank's attention as Cora has been giving him the cold shoulder - and in a very few lines, Totter provides everything you need to know.  It's a role that might have gone uncredited in many a movies, but she's both important enough to the plot and immediately unforgettable enough (she's competing on screen with Lana Turner, ferchrissake) that you can see why the studio put her name up in the credits as well.
If you've never seen it, fix that situation.
Posted by The League at 2/06/2021 02:14:00 PM