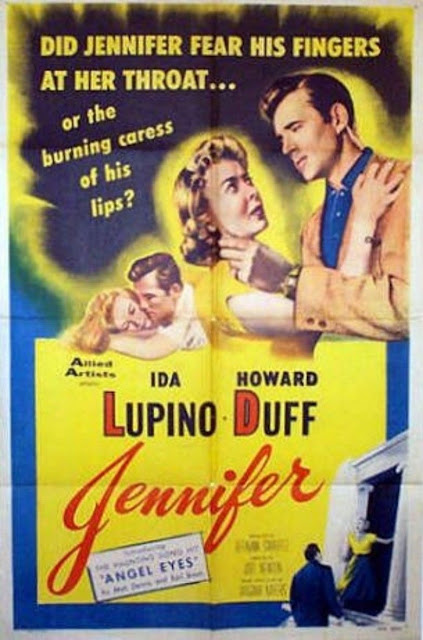 Watched:  02/01/2021
Format:  Amazon Watch Party
Viewing:  First
Decade:  1950's
Director:  Joel Newton
Co-watched w/ JeniferSF
A thriller which lifts elements from plenty of Gothic mysteries, borrows from noir, and has an ending that's maybe whatever the opposite is of deus ex machina, Jennifer (1953) has some great things going for it, but was not my cup of tea, exactly, but I found myself actually fairly wrapped up in the mystery.
Starring the lovely and talented Ida Lupino, with photography by James Wong Howe (one of the best to ever DP a movie), it still feels oddly like a B- picture, and maybe it was.  The film runs (blessedly) short, relies upon a small cast where Lupino is the biggest star, and we see only a handful of locations.
Lupino wasn't quite done with movies at this point, and two of my favorite of hers follow this one: Private Hell 36 and the phenomenal The City That Never Sleeps.  She'd just come off two great films with Robert Ryan, Beware, My Lovely and the icy On Dangerous Ground.  By the time she hit her 40's in the late 1950's, she was more or less transitioning to TV where she'd remain for the rest of her career - as, at the same time, she took to directing as much or more than acting.*
The thing is - Lupino is actually very good in this film, the film itself is just kind of a creaky mystery.  She's co-starring with husband Howrd Duff, who is not quite in her league.  Duff plays one of two men (well, one is supposed to be a 19-year old boy, but looks 30... and is) trying to win the attention of the new lady caretaking a mysterious old house where the last caretaker just disappeared.  But Duff kind of paws at Lupino, whom he's supposed to have just met, and it's... it's unseemly sir.  You seem either drunk or like you don't know an appropriate boundary with someone you just met.
It's all part of the "which of several possible terrible fates could have befallen Jennifer?", which Lupino tries to piece together through a series of mysterious clues.
But.  I was not clear on why the house was empty, if anyone was coming back, and generally what she was supposed to be doing in the house - as the mystery begins before she's finished the job interview.  There's hints of Laura as everyone is focused on the titular "Jennifer", but she's not there.  It also has flavors of Rebecca for the same reasons - plus big ol' house.
But, (SPOILERS) the resolution to the mystery is a cheat and breaks a contract with the viewer that doesn't feel fresh so much as it feels like a twist on "it was all a dream".  Telling us "oh, no, she actually went crazy so we took her away, and everyone but you knew, and we spent the movie just not telling you this one thing for no reason" is not what I'd call the finest in screen writing.  I'm curious if the movie didn't have a different ending and this was the safe one they released.
Anyhoo... the movie isn't great, but it is a decent, small-scale mystery.
Interesting post on the making of the film.
*I was very curious where this fell for Lupino as a filmmaker.  By this point, I believe, she'd moved on from her studio contract days to try her hand at producing and directing, a trailblazer when it came to her second career as a director.  And... hats off to her.  A career for women in Hollywood was even more unkind during those years than now, and in her 30's - while a knockout - she wasn't going to be an ingenue.  Wisely, she moved on and being smarter than the smarties, she made it as actor, writer, producer and director - doing all of them by her early 30's.
Frankly, I think Lupino's phenomenal during this whole era, the studios were crazy for not letting her do whatever on their dime, but I didn't exist yet and nobody was asking me then or now.
Posted by The League at 2/02/2021 11:06:00 PM