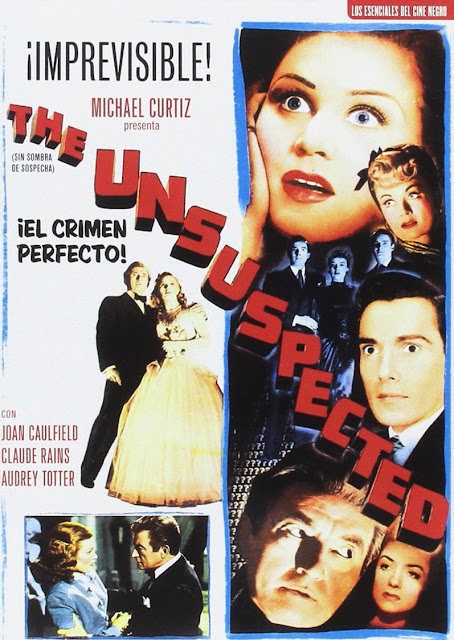 Watched:  02/03/2021
Format:  TCM on DVR
Viewing:  4th?
Decade:  1940's
Director:  Michael Curtiz
Michael Curtiz directed innumerable good to great movies, and we find ourselves watching his output a few times per year one way or another, but since finding The Unsuspected (1947) as part of my "let's watch all the Audrey Totter stuff we can find" quest, I'm a little surprised it just isn't more widely discussed.  The cinematography alone is noteworthy, courtesy industry veteran Elwood Bridell.  Add in a Franz Waxman score, and multiple hooks for a story, and it already has plenty to recommend it before you point out Claude Rains stars. 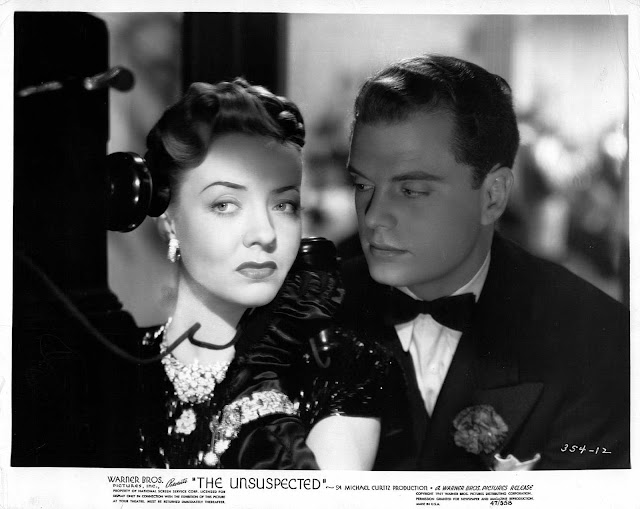 As a jealous bad-girl, honestly, Audrey Totter steals the show.  And, frankly, has the best dresses, lines and delivery.  The terrific Constance Bennett is solid, but you get the feeling the role was envisioned for Eve Arden (I looked it up, and imdb trivia actually confirms this, but you can feel it in every line of dialogue).  In a bit more of a thankless role, Joan Caulfield plays the wide-eyed, virginal figure at the center of the story and Totter's counterpoint.
The mystery is sort of a weird one - they aren't so much hiding who is up to something, but how and what and even why are up for grabs, and in that - I find it a sort of odd murder mystery/ thriller.  We call it noir, and I guess it kind of is by default by way of cinematography and a few other elements, but, man, it also just feels like a good old fashioned thriller in a lot of ways, too.
There's a dead girl who isn't, a husband she doesn't remember, and a dead secretary no one much seems to miss.  Throw in a lot of bitter feelings in a small family under one (large) roof, and it makes for some well-charged stuff.
Again - I can't say enough about the shot selection, lighting and use of focus, foreground and background placement, and some fascinatingly weird shots that creep up throughout.  It's shot like a wild mix of a horror film and noir, and that's really the best of all worlds in my book.
SPOILERS
Look, not only is Audrey Totter gorgeous in this film, but she's also stealing focus intentionally or otherwise in every frame where she appears.  She eventually gets bumped off late in the film, and as much as the action picks up immediately afterward and much happens, it never feels like the movie quite recovers from losing her.  They've taken Constance Bennett out of play by the point, and Joan Caulfield is mostly just a victim.
But, by this point you're likely already so sold on the movie you want to see how it's going to wrap up, and it's never remotely bad - you just miss Totter's energy.
END SPOILERS
It remains one I'd suggest for a nice society thriller.  Enjoy the whipsmart dialogue given to Totter and Bennett, and the weird twists and turns the film takes.  And don't miss out on the creepy world created in light and shadow.
Posted by The League at 2/03/2021 11:40:00 PM