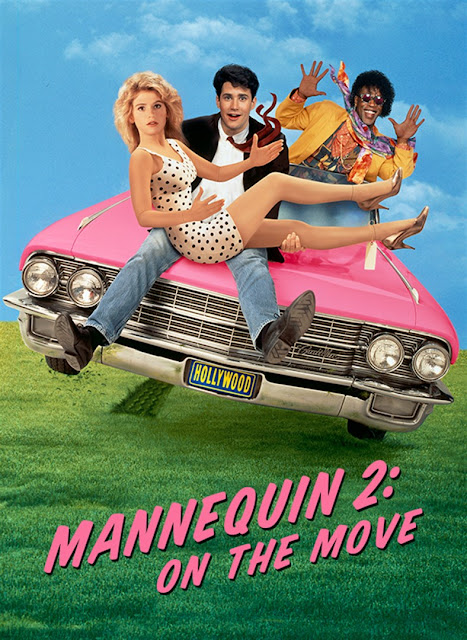 Watched:  02/05/2021
Format:  Amazon Watch Party
Viewing: First
Decade:  1990's
Director:  Stewart Raffill
This movie wasn't very good.  Jenifer agrees.
These days, if a movie does well, studios understand that if they're going to make a sequel to a popular-ish film, the *best* thing to do is to try to go bigger and better.  Give the audience a reason to get them to come back.  However, Mannequin 2: On the Move (1991) is very much of the era where the reason for a sequel to exist was so that as many pilot fish left over from the first film can gorge themselves on the good will of the first movie and not care at all if the sequel will be worth the film it's printed on.
Pretty much nobody is back from the first movie - and I don't just mean Andrew McCarthy and Kim Cattrall.  The actual producers, up and down, aren't the same.  The director is new.  You have the same store as the location, and you have Meshach Taylor back as "Hollywood".  That's it.  So no one cares, no one is trying, and the end product may be less than ideal.
Anyway, there MUST have been a script, because there are costumes and whatnot, so someone knew what they'd need for shooting.  But it sure doesn't feel like there's a script - it feels like people dicking around in front of the camera.  Except for Kristi Swanson, who is actually at least trying here (despite a bizarre wig that seems inspired by a Rick James groupie's hair).  And, yeah, Meshach Taylor, but he was kind of dicking around in the first movie, too.
But there's only small bits in the 90 minute run time that actually reach the level of "funny bit" or "joke that might make one crack a smile".  The rest is weird mugging no one asked for and maybe one of the lest charismatic leads I can remember in anything that wasn't one of those movies with people fighting in a sci-fi wasteland.  And the weird thing is:  normally that guy is fine.  He's been in lots of stuff - stuff you've seen.  But here - he's working with nothing, and I guess that was a problem.
I don't regret making other people watch the movie.  At least we all suffered together.
Posted by The League at 2/07/2021 01:24:00 AM