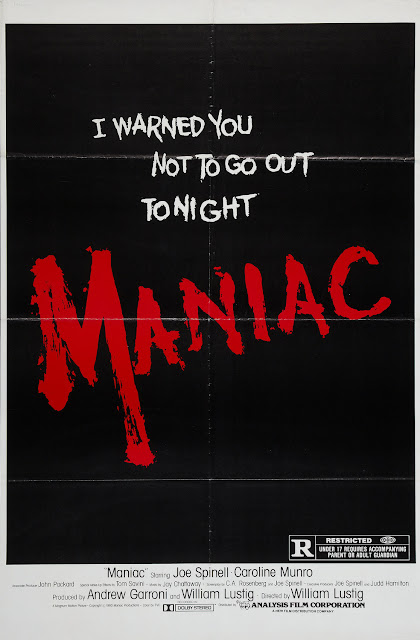 Watched:  04/16/2021
Format:  Amazon Prime
Viewing:  First
Decade:  1980's
Director:  William Lustig
One of the interesting things about horror is that it can be used to give an actor a showcase who might not otherwise get one.  Joe Spinell is not a name with which a ton of people are familiar, although he had appeared in two Rocky films. I knew him from his star turn as the villain in Starcrash.
Spinell was in a ton of stuff, but mostly not in leading roles, and mostly played a heavy.  Maybe not the greatest way to stretch one's acting resume.  But in 1980 he was part of the creative team that wrote and created Maniac, the movie of which he is the star (but let's agree it's weird to call him a protagonist, even if he is, kinda sorta).  He created an opportunity, and he really made the most of it.
JAL recommended the film, and I'd been putting it off, but it seemed like good counter-programming to The Beautician and the Beast.  Anyhoo... I get why JAL suggested it, and I did, in fact "like" it, which is a curious thing to say about a movie where a guy kills a whole bunch of people over 90 minutes.
I'm going to recommend the movie as a terrific/ whacko character study, a truly grisly horror movie (I did not watch with Jamie), and having a hell of an ending.
Plus, it briefly co-stars Signal Watch fave, Caroline Munro!  Just sorta being Caroline Munro - but as a photographer!
Anyway - no spoilers.  But if you like the grittiness of, say, Basketcase, this movie is for you.
Posted by The League at 4/18/2021 10:13:00 PM