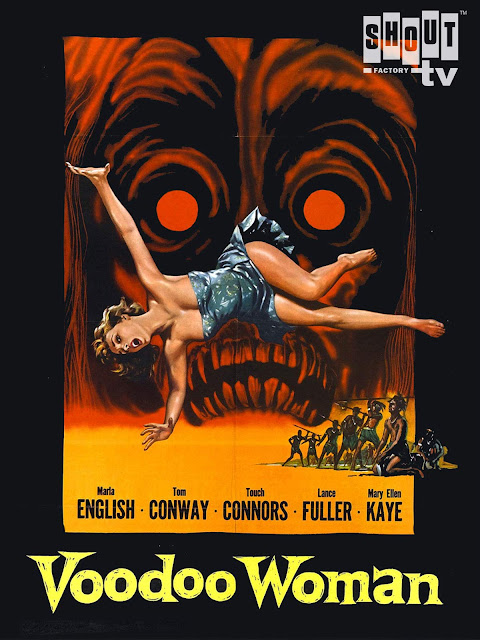 Watched:  04/26/2021
Format:  Amazon Watch Party
Viewing:  First
Decade:  1950's
Director:  Edward L. Cahn
So, Voodoo Woman (1957) is a low-budget picture released through API that's more or less a jungle horror adventure aimed at teens, I think.
The plot gives us the ruthless Marilyn (Marla English) who wants GOLD in the jungle, I think.  Anyway, she dupes a local barkeep into funding her as she talks her would-be boyfriend (Lance Fuller) into going out there, along with a hired guide/ tough guy (Touch Connors).  But - whoops - they're headed for a village where voodoo magic is melding with mad science as colonialist scientician Dr. Roland Gerard (Tom Conway) is working with local tribes people who perform voodoo to (a) prove you can transform a person into a sort of Voodoo Monster, and (b) use science to keep them in that state.
I won't bother you with more details.  It's a movie that is rigidly against more than three set-ups per scene, doesn't make much sense, but has both an AMAZING monster suit for the titular Voodoo Woman and Marla English is terrific as the scheming evil-lady at the center of the picture.
Go in expecting a movie-serial-level production and you'll be fine!
Posted by The League at 4/27/2021 11:08:00 PM