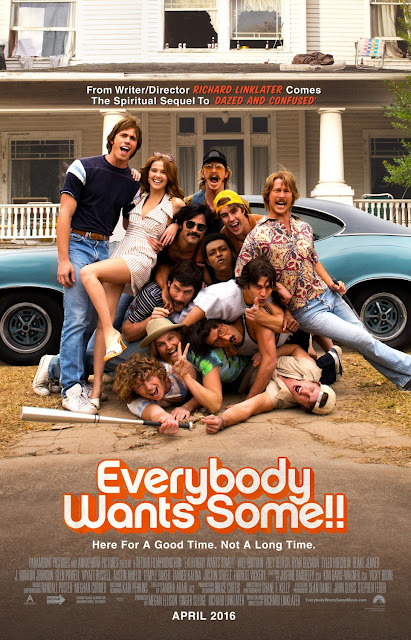 Watched:  04/28/2021
Format:  Amazon
Viewing:  First
Decade:  2010's
Director:  Richard Linklater
I remember the trailers for Everybody Wants Some (2016) were almost confusing.  They made no argument for why anyone should get off their ass and get to the theater to see the movie - a film about a bunch of baseball players at the fictional East Texas State University, kind of screwing around, and...
It seemed the ads almost counted on a knowledge of how Linklater's other movies worked, and counted on you wanting more with different characters.  But in 2016, an all-male cast of dudes acting like dudes seemed almost tone-deaf, and the population who would be nostalgic for the college years circa 1980 was mostly home watching Downton Abbey.
Honestly, the first fifteen minutes or so - I wasn't sure I was on board.  It *is* an all-male cast being dudes.  I'd like to say college dudes are not that crass, but some sure are, and the things you let slide...
But, if nothing else, Linklater has a remarkable ability to humanize the dispshittiest of dudebros.  Maybe you don't *understand* them, but you can see how one would wind up killing time with them.  And, really, that's kind of the point of the movie:  those first few days of college are weird as people are thrown in together from a diversity of backgrounds (yes, even baseball playing white dudes) and you find common ground.  Add in the goofiness of the naive freshman with the upperclassmen who know the ropes, and you do get the light-hazing of guys hanging out.
As Jamie said at some point "you don't usually get the real feel of college in many college movies", and, yeah - I mean, I definitely saw some of the recognizable conversations and whatnot, and directionless quests for something to do from a pre-internet era.  The inherent comedy of picking on the new guy is actually really funny, but some of the movie also gets a bit real as the upperclassmen do try to impart bits of wisdom - they're not out to do more than razz the new guys.
The cast includes Wyatt (son of Kurt) Russell, who recently made a splash as John Walker in Falcon and the Winter Soldier, as well as Tyler Hoechlin, who is currently starring as Superman on CW's Superman and Lois.  The film's POV character, our Wylie Wiggins of this Linklater film, is Jake, played by Blake Jenner.
It also doesn't hurt that the movie seems to have been made at Texas State University, the school down the road from Austin by 30 minutes that was where it always seemed like people were having way more fun than we were having at UT, as well as Sam Houston State, which is kind of the equivalent of Texas State for Texas A&M.  But, yeah, it's recognizably Texas.
I don't know that there's a compelling argument for this movie existing - and maybe that's part of the problem the movie experienced in the 2016 marketplace.  But if you can retune yourself to college, yeah, it's really pretty funny as you get to sort out what the deal is with each of the characters, and Linklater both refusing to dip into standard tropes or stereotypes or inject artificial conflict.  The movie just sort of cruises along, but never feels dull.
What's weird is that Linklater really deployed what worked before and there really isn't much new here if you've seen Dazed and Confused.  I don't know exactly why he would have rolled this same premise out again, except maybe he needed to get back to something that felt comfortable.  It's certainly a spiritual sequel, and maybe existed previously as an actual sequel of sorts.  But you do kind of see too many similarities for it not to raise some questions. (edit:  I see now they say that this is a spiritual sequel to Dazed and Confused right on the poster.  Well, there you go.).
Further, I am a little baffled by the film's title, which I assumed was a reference to the Van Halen tune of the same name off Women and Children First.   Because, while the movie takes place in 1980, the year of the album's release, we never hear the song.  Of course, I also waited to hear Midnight Special through 90 minutes of that film.
I dunno.  I wouldn't say not to watch it.  I genuinely liked it and will watch it again.  I'm just shocked Linklater is still out there making chillaxing movies that seem designed to watch while having a beer, etc...  Nice to know that can still happen.
Posted by The League at 5/01/2021 04:37:00 PM